Bill Belichick wasn’t waiting to select the new anchor of his defensive front on Day 2, trading up eight spots to take Alabama defensive tackle Christian Barmore with the No. 38 overall pick.

Barmore, widely considered the best defensive lineman in the draft, comes to Foxborough to help shore up a run defense that ranked among the league’s worst last year.

He’s also the latest addition in a parade of Crimson Tide players on the Patriots’ roster, including first-round pick and former old teammate Mac Jones.

Here are a few things to know about the latest Patriots draft pick.

The Patriots were his favorite team growing up.

The Philadelphia native grew up around the Eagles, but apparently, it was the Patriots that really had his heart as a kid.

That’s why Barmore called his selection by New England “a blessing” and “a dream come true” despite dropping out of the first round while being regarded as the best defensive lineman in the draft.

Barmore said his affinity for New England stemmed from his love of the Alabama Crimson Tide, who were incidentally his favorite college team growing up.

What connected the two squads in his mind?

“I love dominance. [Alabama’s] like the same program, just in the NFL. I love winners”

New England takes their second player from Alabama in this #NFLDraft with DL Christian Barmore. pic.twitter.com/R8GvuCfu3y

Belichick was right: there really are a lot of “Tides” in here.

Barmore now becomes the eighth Alabama player and 12th Nick Saban-coached player Belichick has drafted since coming to the Patriots in 2000.

This year also marks the third time Belichick has taken two or more Saban protégés in the same draft, something he did in 2002 (Jarvis Green and Rohan Davey of LSU) and 2016 (Xzavier Dickson and Cyrus Jones of Alabama).

It is the first time the longtime Patriots coach has ever led off a draft with two straight Saban-coached picks with Jones and Barmore.

The new Patriot says he can’t wait to play alongside “the OG” Dont’a Hightower — an Alabama alum from 2012 still on the team — and said of Mac Jones, “That’s my guy.”

Unlike a lot of elite prospects that grow up playing football, Barmore has only been playing the game for about five years.

He was playing basketball at Del-Val Charter School growing up in Philadelphia when the school’s football coach, Troy Gore, noticed him and convinced him to play football.

After Del-Val closed in 2016, Gore helped him find football camps to hone his skills after Barmore transferred to Neumann-Goretti High School. In his downtime, Barmore studied legendary NFL defenders on the internet to help himself improve.

“I looked up Reggie White because he was from Philly. I didn’t know until later, who he was, like a legend,” Barmore said in a pre-draft interview. “I used to watch him, tried to study all his moves… that’s the guy who really made me who I am today. I didn’t get taught the game until late. I was watching all the moves he was doing, took it in, and tried everything out.”

He turned down offers in his home state to play at Alabama.

The Philadelphia native got serious notice from top schools during his time at Neumann-Goretti and originally committed to play for his hometown Temple Owls going into his senior year of high school.

But as he got more offers from top schools like Florida, LSU, Georgia, and Alabama, Barmore de-committed from Temple and re-opened his recruitment.

Then, a visit with Crimson Tide head coach Nick Saban sold him on heading to Tuscaloosa, giving him a chance to play for his favorite team.

After redshirting as a freshman in 2018, Barmore finally got his chance to shine, starting in 11 games in his second year with the team.

He was the Defensive MVP of the National Championship Game.

Barmore came into his own as a redshirt sophomore for a dominant Alabama team that went on to win the College Football Playoff National Championship in 2020.

He saved his best game at Alabama for last, earning the game’s Defensive MVP honors through a dominating performance that included five tackles (two for loss) and a sack.

He gets after the quarterback.

Interior defensive linemen aren’t usually known for racking up sacks. But Barmore excelled at hunting quarterbacks for the Crimson Tide.

He recorded a team-high eight sacks as a redshirt sophomore in the 2020 season, along with four quarterbacks hits and 27 hurries.

He also has the highest Pro Football Focus pass-rush grade among defensive tackles since he began starting for Alabama in 2019, doing much of his damage from the 3-technique position (though he said he’s ready to play anywhere on the defensive line).

When asked to describe his game and what he’ll bring to the Patriots, he said, “I’m me. Christian Barmore. I play like me…I’m a dominant player.” 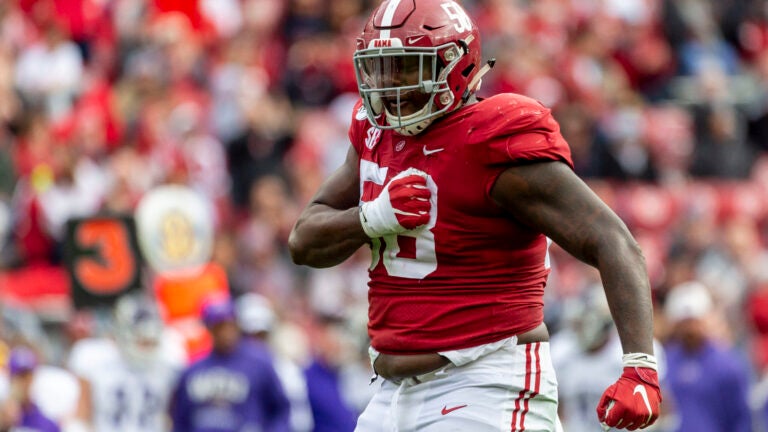 Patriots trade up to take Alabama DT Christian Barmore with No. 38 pick