The Patriots drafted Oklahoma defensive end Ronnie Perkins with the 96th pick in the 2021 NFL Draft on Friday night.

Here are five things to know about Perkins.

Perkins’ game revolves around his motor.

The NFL’s prospect analysts grade Perkins as a “good back-up who could become a starter” — down on his athleticism, but high on his approach.

Perkins was asked whether he is comfortable playing on his feet rather than with his hand on the ground.

“One thing about me in college, just knowing that I would get to this point one day, this was just one of the things I practiced throughout getting better,” Perkins said. “Just playing as an outside linebacker and playing in a two-point stance. So I feel real comfortable in it.”

Perkins’ detailed focus on becoming an NFL player likely would not surprise Oklahoma head coach Lincoln Riley, who called Perkins “one of those guys you can unequivocally say he loves football” after Perkins’ pro day.

“He loves every part of it,” Riley said. “He loves to train, the process of practicing and improving, the competitiveness. The better and more competitive the environment is, the more he rises his game up, too. And he is just a tremendous football player that I think is going to get a lot better, too. So he’s got a lot of great memories here. He’s been a great leader for our squad, a great playmaker, and he’s going to make somebody very happy.”

He wanted to wear cleats to school in second grade.

When Perkins was growing up in St. Louis, his older siblings were told by their father to show him no mercy. Perkins grew up tough, and he wanted to play football with his brothers. When he turned seven and was able to join the team, he was so excited to be part of the team, he tried to wear his cleats to school.

“I got in trouble for running around the house and scratching the whole house up in my football cleats because I was so excited to play,” Perkins told the media after he was selected.

He thought he should go higher.

While many analysts liked Perkins, few seemed to believe he would go in the first round, expecting him to be more of a high-second round prospect.

Perkins, it seems, disagreed. As the evening continued and his name wasn’t called, he tweeted, “This is so disrespectful lol” before adding “Fuel to the fire” in a quote tweet later on.

He felt the end result, however, was a good one.

“Like man, I’m really a Patriot now,” Perkins said in his call with the media. “I just can’t wait.”

He is blown away to play for Bill Belichick.

Perkins said the Patriots dug deep into his home life in the few conversations he had with the team before the draft. His conversations were with Steve Belichick, Bill’s son who coaches the team’s outside linebackers.

“I was really still mind-blown that I was talking to somebody who is part of the Belichick family,” Perkins said. “You mention that name, that’s just one of the most legendary head coaches in the NFL. So just to be talking to his son who will probably be just like him in a few years — definitely talking to him was a huge blessing and I was super excited. Now I’m super excited to go in and play for both of those guys.”

“Honestly I’m so excited tonight,” Perkins said. “I just can’t even wait to go in and learn from Coach Belichick, the younger Coach [Steve] Belichick, like I’m just excited for this whole opportunity. I just can’t wait.”

Gilmore was involved in trade rumors before the draft as the Patriots reportedly eyed moving up, but the Patriots ultimately stayed put at No. 15 and Gilmore remained with the team.

Perkins, it seems, missed the memo. He was asked whether any Patriots inspired him growing up.

Later in the call, Perkins was informed that Gilmore is actually still with the team. 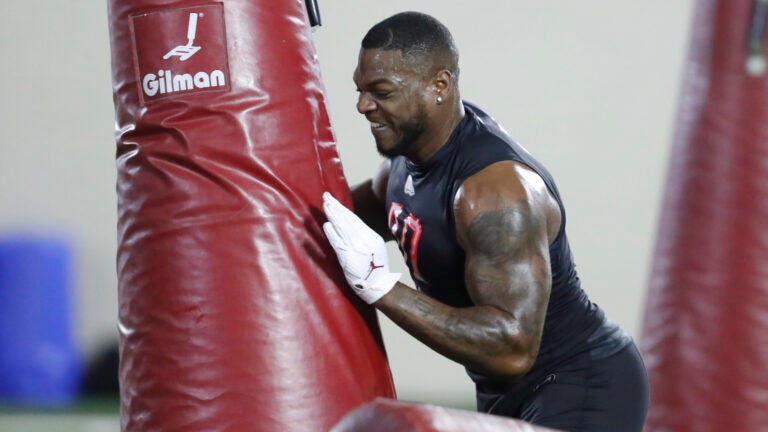