The Patriots may not have selected a player from Alabama or Oklahoma (the colleges of their first four picks) with their fifth-round pick, but they did pick a player from a school they know well.

New England made Michigan linebacker Cameron McGrone a Patriot when it selected him in the fifth round of the 2021 NFL Draft.

Here are five things to know about the Patriots’ newest linebacker.

McGrone is the fourth player from Michigan to be drafted by the Patriots in the last three years.

Former Wolverines have found themselves a home in New England in recent years.

In 2019, the Patriots drafted Michigan defensive end Chase Winovich in the third round and followed that up by selecting linebacker Josh Uche in the second round plus offensive lineman Michael Onwenu in the sixth round of the 2020 NFL Draft.

“Now getting the chance to be around some of my former teammates, that’s going to mean a lot to me too,” McGrone told reporters of playing alongside Winovich and Uche again. “Just to see some familiar faces is a blessing. Josh hit me up just to tell me congratulations and same with Chase. Just overall a blessing.”

He was a highly ranked recruit in high school.

In McGrone, the Patriots are getting a player with a lot of upside. The Indianapolis native was a five-star recruit coming out of high school and was ranked as the 24th-best prospect in the 2018 recruiting class by 247 Sports. The recruiting service also ranked McGrone as the best linebacker in his class.

McGrone received several scholarship offers, including some from top schools such as Notre Dame, Iowa, and Wisconsin. Of course, he ultimately chose Michigan. He redshirted his freshman season in 2018 but made an impact as a redshirt freshman in 2019, recording the fifth-most tackles on the team with 65, nine of which were for a loss. He also had four sacks and a forced fumble that season.

His scouting profile projects him to be more of a run-stopper.

The last two players the Patriots have picked from Michigan have been more effective in passing situations. That doesn’t appear to be the case for McGrone.

NFL.com analyst Lance Zierlein wrote that McGrone has “adequate” size (standing at 6-foot-1 and weighing 234 pounds) and athleticism. Zierlein believes McGrone “has the skill and strength to make the plays that are in front of him, but he tends to play the game through a straw, limiting his field recognition and ability to play with efficiency against play-action and misdirection.”

While Zierlien projects McGrone to be a depth linebacker, he praises McGrone’s ability to make body-on-body tackles as potential for him to potentially climb depth charts in the future.

“I feel like overall as a linebacker, I feel like I have the tools to be a pretty good linebacker – speed, all that,” McGrone said. “But like I said, whatever I’m needed to do, I can do it. So whatever plays need to be made out there I can make them, in any way possible.”

He tore his ACL this past season.

After a 2019 campaign that showed much promise, the 2020 season was a brief one for McGrone for multiple reasons.

Due to the COVID-19 pandemic, the Big 10 didn’t start play until late October. After the late start, McGrone’s season was cut short just five games in when he tore his ACL in Michigan’s win over Rutgers in November.

“I’m feeling really great, just ready to get to work at this point. Just chipping away every day,” McGrone said of where’s he’s at in his recovery.

McGrone’s 2020 season didn’t look too impressive on the stat sheet due to the circumstances. He recorded 26 tackles and just 0.5 sacks last year.

He shares a strong bond with his brother, Aaron, who has autism.

McGrone was nine years old when his little brother, Aaron Redd, was born. When Aaron arrived, McGrone was hoping to have someone he could play with and share memorable childhood memories.

That didn’t happen right away. Aaron had temper tantrums and fits, their mom Lynn Redd told The Michigan Daily. At 4 years old, Aaron was diagnosed with autism.

Years later, McGrone taught Aaron how to be more comfortable in situations, such as attending sporting events, so Aaron could attend his games in the future.

“Even though we’re like nine years apart, it kind of feels like we’re twins sometimes,” McGrone told The Michigan Daily of the bond he’s developed with his brother. “We go everywhere together, we laugh at everything together. It seems like we just do everything together.”

Aaron, who calls his older brother “Bubby,” eventually grew comfortable with attending McGrone’s football games. After McGrone had an impressive game in his senior season in high school, Aaron ran up to McGrone and said “Bubby, you won the game! You won the game!”

Prior to attending Michigan, McGrone took Aaron to see his first movie in the movie theater. Their mom feared for the worst, but everything ended up being OK.

“I know when (Aaron’s dad) David (Redd) and I are long gone, Aaron will be taken care of,” Lynn told The Michigan Daily. “Because Cameron loves him and he’s loyal to him, and he’ll make sure he’s taken care of.” 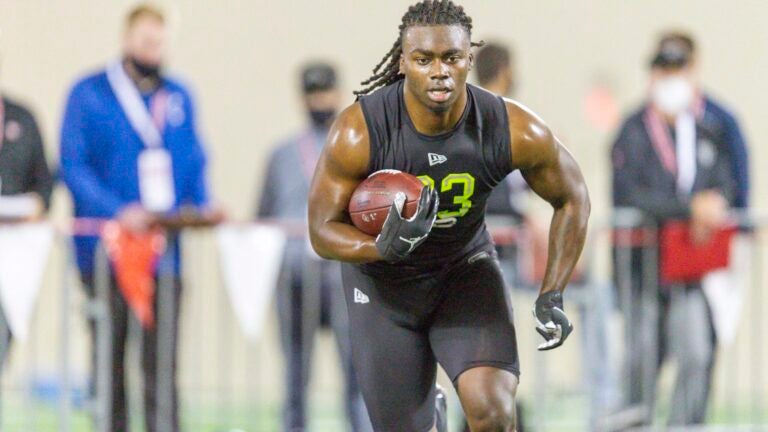 5 things to know about ‘battering ram’ Rhamondre Stevenson, the Patriots’ rookie running back