The Patriots had eight selections in the 2021 NFL draft. Here’s a closer look at who they chose.

New England picked a quarterback in the first round for the first time since Drew Bledsoe in 1993. Jones, who has drawn comparisons to Tom Brady, led Alabama to an undefeated season and national title this past year. It was considered a possibility that he would go earlier than 15, but it ended up working out well from Jones’s perspective.

“At the end of the day, you kind of want to just get the right fit and I feel like, secretly, I really wanted to go to the Patriots all along, so I’m actually really happy that it happened,” Jones said. “But it doesn’t really matter. You get picked. You got to take the opportunity and take advantage of it and learn the new system, learn the new coaches, learn the new culture.”

The 6-foot-5, 310-pound Barmore also starred at Alabama. He was named a third-team All-American this past season and earned Defensive Most Valuable Player in the national championship game. New England traded up to get him, and head coach Bill Belichick said it’s “unusual” to grab a player like him at that point in the Draft.

“It was a dream come true, like a blessing from God,” Barmore said. “For Coach Belichick and Robert Kraft – it really is a blessing. Literally my favorite team growing up.”

Perkins, an All-Big 12 second-team selection, earned three Big 12 championship rings and was part of two College Football playoff teams in three years at Oklahoma. At 6-foot-3, 253 pounds, he has a chance to do some damage in Belichick’s eyes.

“Ronnie‘s a disruptive player, physical outside linebacker defensive end-type,” Belichick said. “We’ll see how that goes when we get him here and work with him, but another guy that has good ability to be disruptive on defense and play physical, has a very physical playing style.”

No. 120 overall: Running back Rhamondre Stevenson

Stevenson started out as a zero-star recruit and played at the JUCO level before blossoming into a standout at Oklahoma and eventually an NFL-caliber player. He’s drawn comparisons to Le’Veon Bell and LeGarrette Blount, among others. He said he was totally surprised to learn that the Patriots were drafting him.

“It’s a great feeling just knowing that I’ve got Bill Belichick as the head coach,” Stevenson said. “I know he’s a great coach, he’s a genius and he loves what he does.”

The 6-foot-1, 236-pound force from Michigan started 15 games at middle linebacker earned 2019 All-Big Ten honorable mention honors. McGrone is coming off an ACL tear but said he’s “feeling really great” and ready to get to work.

“I was overcome with emotion,” McGrone said. “Like I said, just all the hard work put in to this point and to finally get my name called, it just means so much.”

A 5-foot-11, 201-pound safety originally from Houston, Bledsoe shined at Missouri. He played in 10 games this past season and totaled 41 tackles, and in 2019 he became the first Missouri safety to post 10-plus pass breakups in a single season.

The Colorado product, a 6-foot-4, 310-pound menace, earned the team’s Offensive Trench Award as a sophomore in 2019. He played at both left and right tackle in college.

Nixon, a 6-foot-1, 187-pound Mississippi and then Central Florida product, caught 19 passes for 260 yards and two touchdowns this past year as a redshirt senior. 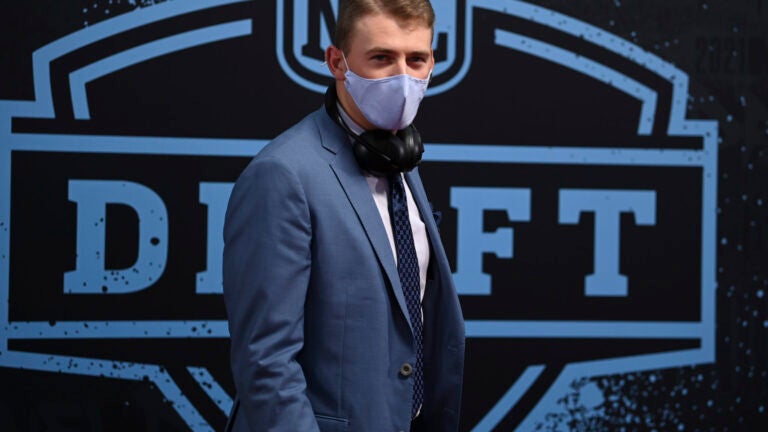