Few people know what Mac Jones can do on a football field better than Steve Sarkisian, the man who called the quarterback’s plays for the last two seasons.

The former Alabama offensive coordinator and now University of Texas head coach told the Zolak and Bertrand Show on 98.5 The Sports Hub Monday he especially learned a lot about Jones during a wild Iron Bowl loss in 2019, while the then-junior was playing in relief of the injured Tua Tagovailoa.

“He took some real hits. The ball was coming out. He stood in the pocket,” Sarkisian recalls. “I learned a lot about him in that game and his ability to withstand the adversity that football presents a quarterback in-game. And at that point, it was like, ‘We’ve got something here.'”

Now, the longtime offensive guru believes Jones is on his way to a successful start to his career with the New England Patriots, who selected the Alabama quarterback with the 15th overall pick in the 2021 NFL Draft.

Sarkisian cites the elite SEC competition Jones faced as a starter last year, plus the playoff games against Notre Dame and Ohio State, as well as his perseverance to wait his turn behind Jalen Hurts and Tagovailoa as reasons he’ll thrive in Foxborough.

But Jones’s greatest attribute, his former play-caller says, is his mind and studious nature toward the game of football.

“He’s the guy that — you have two or three plays in the game plan you don’t really have a great answer for if they do this one thing, but the numbers tell you they aren’t going to do it,” Sarkisian explained. “You don’t bring it up. The next morning, he walks right in and says, ‘Now what are we going to do if they do X, Y, and Z?’ and you’re like, ‘I hoped you wouldn’t ask me that question.’

“He’s that guy. He’s the guy that studies the game plan and is going to know it inside and out.”

Sarkisian likened Jones’s ability to pick up playbooks to that of former Patriots quarterback Matt Cassell, whom the Longhorns coach once oversaw in college. Cassell, as Patriots fans will remember, admirably filled in for Tom Brady in the 2008 season, leading New England to an 11-5 record.

“I’ve been on record saying this: I honestly think he’s the most qualified rookie quarterback to start in Year 1,” Sarkisian said.

Interestingly, while Sarkisian was saying this, a prominent NFL insider revealed not all teams agree with that assessment.

The San Francisco 49ers, who were said to be eyeing Jones with the No. 3 overall pick, reportedly chose Trey Lance over Jones because they believed Lance was more NFL-ready from a mental standpoint, according to ESPN NFL insider Adam Schefter.

New England has a new QB in town 🏈

The Patriots select Alabama’s Mac Jones with the No. 15 overall pick in the #NFLDraft pic.twitter.com/jGH9orKelQ

No one will know the truth of either Sarkisian’s statements or the referendum on Lance vs. Jones until they take the field in the NFL. But without a doubt, the 49ers’ passing on Jones set the stage for the Crimson Tide signal-caller to fall to the Patriots at No. 15 overall — the place Jones has said he hoped to be all along.

If Jones turns out to be as good as New England hopes, San Francisco’s decision to go with Lance over Jones could be a major coup for the Patriots. 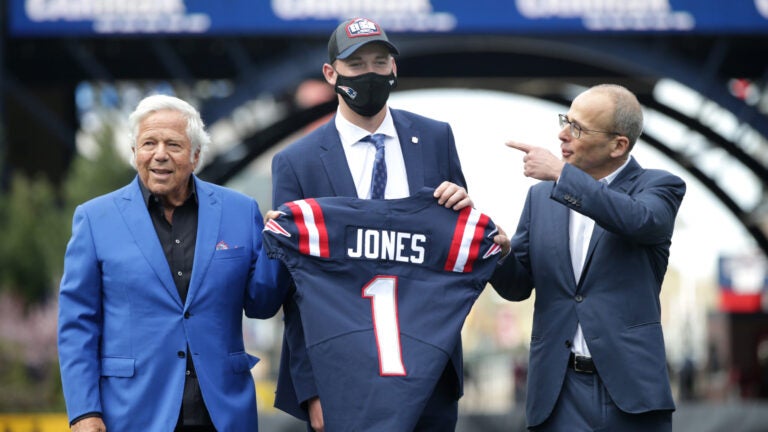 Report: Patriots were willing to pass on Mac Jones rather than trade up