With a baby boy on the way and a solid payday potentially before him, David Andrews was prepared for anything during his first foray into NFL free agency. That included the possibility that navigating the business side of football could have ended with him sporting another jersey in 2021.

But the Patriots center and offensive co-captain also knew the outcome he hoped for.

“We knew we wanted to be back here if it all made sense,” he told reporters on a conference call Tuesday morning. “This is home…this is a special place to me.”

Andrews will soon enter his seventh season in New England with a new four-year, $19 million deal to anchor a Patriots offensive line that will look a bit different than in years past. The former undrafted free agent signee from 2015 is now the elder statesman on an offensive line that just lost guard Joe Thuney and longtime right tackle Marcus Cannon.

But the Patriots will return several faces Andrews is familiar with: Isaiah Wynn, who struggled with injuries last year but just had his fifth-year option picked up Monday; Trent Brown, who won a Super Bowl playing alongside Andrews in 2018; and Ted Karras, Andrews’s former backup who came back to Foxborough on a one-year free-agent deal.

Some believed Karras’s signing might deter the Patriots from re-signing Andrews since Karras has been a starter for the last two seasons, both with New England and in Miami. But Andrews was undeterred by the news.

“I don’t believe in closing any doors,” he said, citing his and Karras’s working relationship during their time with the Patriots. “Teddy’s a great teammate, he always been a great teammate. He’s obviously become a good friend of mine over those four or five years…I know Ted can help this football team. Anyone who can help the football team, you want that person on that roster.”

While Andrews said the Patriots’ free-agent spending spree didn’t alter his plans to return, he admitted he was excited by the moves the team made to improve an offense that struggled mightily last year.

The former Georgia Bulldog also said he’s looking forward to work with first-round quarterback Mac Jones, who starred with Georgia’s SEC rival Alabama Crimson Tide, and getting back to work with his unit in OTAs and minicamps this summer.

“We made a lot of improvement on paper,” Andrews noted. “Now we have to become a football team…just excited to get the whole ball rolling here.”

Andrews also talked about legendary Patriots coach and director of football research Ernie Adams, who retired following last weekend’s draft after more than 20 years with the team, and shared a story about his first interaction with Adams when he was a rookie in 2015.

David Andrews said he walked into the training room recently and Trent Brown (6-8, 380) was lying on the table.

"He was getting some treatment before we worked out and I just could not believe how big that human is," he said, serving up a reminder of his time with him in '18.

“I remember a fumbled a snap in spring or training camp — something early — when we were running a guard-pull play. Bill [Belichick] obviously didn’t like that very much and I ended up running a lap,” Andrew recalls. “But then Ernie after practice at some point talked to me, was just talking about how that’s one of the harder snaps because the quarterback’s pulling away in the opposite direction for the handoff, but you’re going flat down the line to try and cut somebody off…and ever since then, I was like, ‘Wow.’

“I always made an effort to talk to Ernie when he was in the building or passed him in the building about rules, whatever it may be. He’s like an encyclopedia. Ernie will definitely be missed around the building, that’s for sure.” 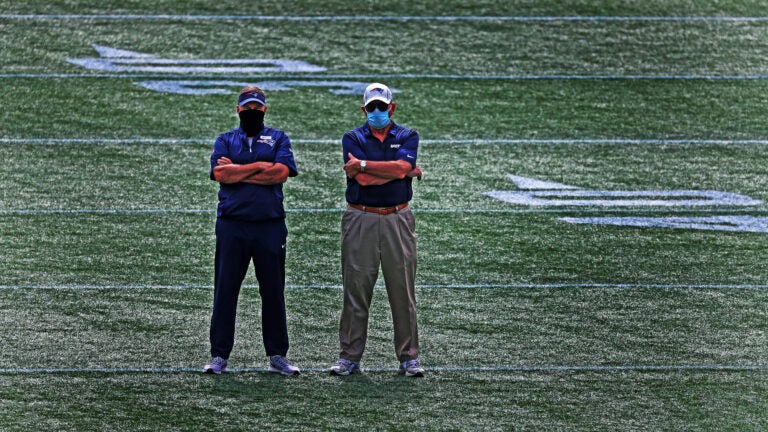