When the football world talks about the Patriots’ draft, most of the chatter revolves around New England’s first-round pick Mac Jones and when he’ll assume his role as the franchise’s presumptive quarterback of the future.

But Jones might not be the Patriots rookie who makes the biggest splash in 2021.

That could be defensive tackle Christian Barmore, a second-round pick Bill Belichick traded up to grab 38th overall who many believed to be the best defensive lineman in the draft.

The young but talented tackle’s raw ability and positional value for a Patriots defense that struggled to stop anything on the ground last year could see him earn a bigger role than any other Pats rookie in 2021.

Here’s what the Patriots are getting in their big, explosive young defender.

He can play anywhere on the defensive line

In his introductory presser with Patriots media, Barmore told reporters he’s no stranger to jumping around at different positions along the defensive line.

“Literally at Alabama, we move everywhere on the D-line. So, I played everywhere they wanted me to play,” he explained.

Indeed, the Crimson Tide lined him up in a variety of spots in both 4-3 and 3-4 base defensive fronts, allowing him to use his quickness to beat single blocks in a one-gap scheme or rely on his size and strength to take on double-teams as a two-gap player.

That experience will serve him well with the Patriots in a few ways.

For one, Belichick-coached defenses highly value versatility from their defensive linemen. For another, he’ll need to prove he can handle a full plate of responsibilities given how defensive schemes have changed in the pass-happy NFL.

Teams are increasingly relying on “nickel” and “dime” packages with extra defensive backs rather than “base” fronts in order to better defend speedy slot receivers and pass-catching tight ends. The Patriots have especially pushed that curve to its limits, playing a “base” 3-4 or 4-3 front on just over 16.4 percent of their snaps in 2019 and only 3.6 percent of the time in 2020 due to injuries and opt-outs to key players — well below league average in both seasons.

That sometimes puts the onus on just two defensive linemen to control the middle of the field against the run, an area the Patriots got burned in last year.

Barmore will likely get a chance to prove he can hold his own early on.

As much as Belichick hopes to see Barmore develop into an every-down force, the Patriots coach took an immediate interest in what the dynamic defensive tackle can do against the pass when scouting him.

Having defensive linemen that can push pockets and generate pressure directly into a quarterback’s face are the building blocks of a great defense. Barmore has all the desired characteristics to be such a player for New England.

For a man who stands 6-foot-4 and checks in at 310 pounds, he has the explosive first step of a much smaller player, allowing him to leave slower blockers in quicksand — as he does to Notre Dame guard Tommy Kraemer in the College Football Playoff Semifinal.

If speed alone doesn’t do the trick, he can use his hands creatively to win a rush from swatting blockers’ hands down as he dips under their arms using his outstretched hands to grab and then toss them out of the way.

Here, he loses Kraemer again by setting him up for an outside rush before clubbing Kraemer’s inside arm and swimming through on his way to sacking Ian Book.

He tried a similar move on this play in the national title game but doesn’t win as cleanly on the swim move back into the A-gap. But he keeps his balance and recovers with a quick second punch that throws off guard Matthew Jones, drawing a holding penalty that negates Ohio State quarterback Justin Fields’s escape.

The latter two plays show how effective Barmore can be when rushing the passer as a 3-technique (lined up over the guard’s outside shoulder), where he generated the majority of his pressures last year.

Look for him to get opportunities as a situational pass-rusher as he makes his push to factor into the defensive line rotation with Lawrence Guy and Henry Anderson.

He has the tools to dominate against the run

Barmore’s ability to get after the quarterback might help earn him some early snaps this year, but making an impact on early downs against the run is what will keep him on the field.

“Christian Barmore is an absolute monster.”@InTheBleachers goes to the film room to breakdown the former @AlabamaFTBL defensive tackle in this @Progressive Tape Don’e Lie Profile. pic.twitter.com/7tRU9J5Kac

The soon-to-be-rookie tackle has some work to do in that regard, with scouting reports dinging him for freelancing in the run game at times rather than sticking to the scheme or prematurely tipping his position or assignment to blockers before the snap. Such things are likely the result of inexperience, as the 21-year-old has only played about five years of football in his life thus far.

But despite his rawness, he’s proved he can still give opposing offenses fits.

Belichick especially praised the way Barmore uses his arms to engage and control blockers before shedding them and finding the ball carrier.

He does just that on the following play against Kentucky, stacking his block and jumping right into the hole to stuff the quarterback draw.

Then, this fourth-down stop against the Buckeyes in the championship game puts his full package on display: the ability to stack and shed his block at the point of attack, even briefly fighting through a double-team, and the speed to chase down a running back behind the line of scrimmage for a loss.

As said before, the biggest key for Barmore will be showing he can play with discipline in the run game, whether that means filling the appropriate gap or occupying double-teams to allow linebackers to clean up plays in the whole. Making mistakes in those areas at the NFL level will be far more costly than they were in college, where Alabama’s collective dominance was generally able to overwhelm opponents.

Fortunately, as Belichick has repeatedly touted, Barmore’s tutelage under Nick Saban, who has overseen the development of many a dominant defensive lineman, should prepare him well for what Belichick will expect of him in the professional ranks.

Now, it’s just a matter of how well he puts it into practice — and when he’ll get a chance to show off what he can do. 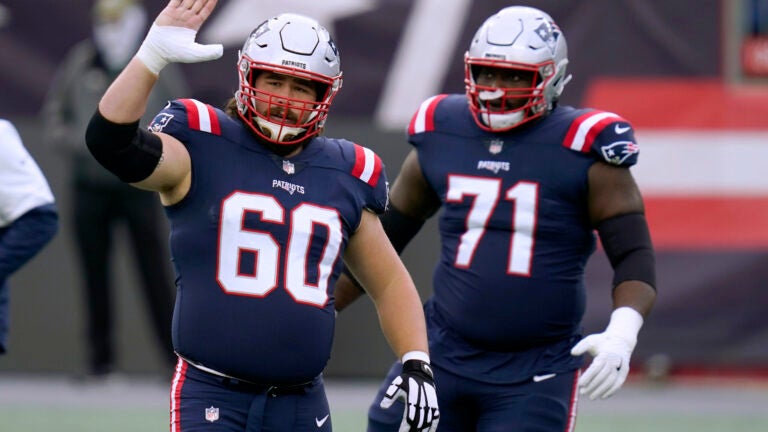