A combination of good fortune and patience brought the Patriots and their possible quarterback of the future, Mac Jones, together in the 2021 NFL Draft.

Despite pressure to trade up to grab him or another quarterback, Bill Belichick and company patiently waited for Jones to slip down the board before taking him at No. 15 overall even after Justin Fields came off the board to Chicago four picks before Jones.

But The Athletic’s Jeff Howe reports the Patriots had serious competition for Jones in the New Orleans Saints.

Howe wrote Monday morning about the process leading to New England’s selection of Jones, including how the quarterback connected with Josh McDaniels ahead of his second Pro Day, as well as the efforts the Saints made to grab Jones themselves.

“After he fell past the San Francisco 49ers at No. 3 and the Carolina Panthers at No. 8, the New Orleans Saints began calling teams about trading up from No. 28, according to a source,” Howe said. “The Saints couldn’t find anyone who wanted to move back that far, but they had a deal in the works to get No. 16 from the Arizona Cardinals — one pick too late.”

Such a scenario invites the purely hypothetical question of what the Patriots would have done if the Saints had actually convinced a team to give them, say, pick No. 14 and the Patriots had gotten wind of it.

Would they have stuck to their seemingly nonchalant approach and pivoted to another quarterback option rather than trade up for Jones themselves, as Sports Illustrated’s Albert Breer suggested? Or would moving up one spot not felt like too big a price to select their quarterback of the future?

In the end, those questions are moot now: New England’s patience and read of the draft board won the day, landing the team what could even up being one of the better value picks in the first round. 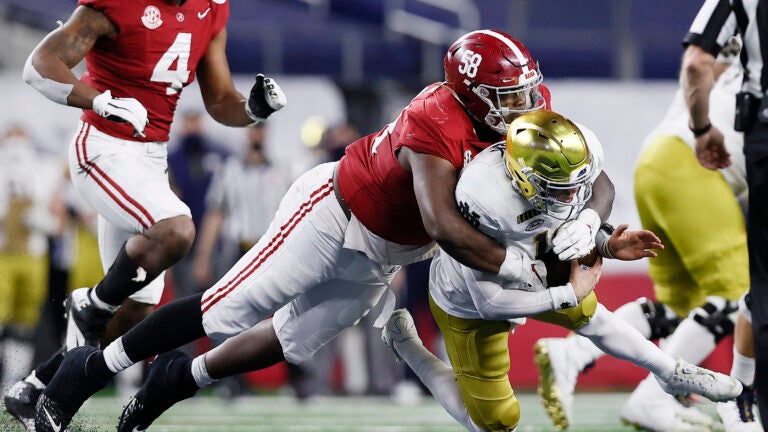