For the first time since 2017, twin brothers Devin and Jason McCourty won’t be on the same team next year.

According to NFL.com’s Mike Garafolo, Jason McCourty is headed to Miami where he will rejoin head coach Brian Flores, who was an assistant coach with the Patriots before he was hired by the Dolphins.

The #Dolphins are signing veteran CB Jason McCourty, source says. The 12-year veteran heads for a reunion with Brian Flores.

McCourty has been in the NFL since 2009. He spent eight years with the Tennessee Titans and one with the Cleveland Browns before the Browns traded him to the Patriots for a pair of late draft picks.

The defensive back recorded two interceptions as well as 152 tackles with the Patriots. His biggest play came in Super Bowl LIII when he broke up what looked like a sure touchdown pass from Jared Goff to Brandin Cooks.

“Oh my God. That was a tremendous effort and a great play on the ball,” Bill Belichick said after the game. “It looked like [Cooks] was going to fair catch the ball. McCourty came out of nowhere to make that play”

Jason and Devin were named Patriots captains before the 2020 season. Jason started 11 of the Patriots’ 16 games and recorded 42 tackles on the year.

“This year in free agency has been different obviously with the cap and everything going on as a result of 2020,” he told the NFL Network in March. “I just want to be somewhere where I’m wanted and an opportunity to compete and help the guys around me.

“As an older player, I really look forward to and love being able to mentor younger guys and be able to help them grow as well as going in there competing and trying to win games. So wherever that may be, I’m going to be excited.”

Now divisional rivals, the McCourty twins will face off twice next season. 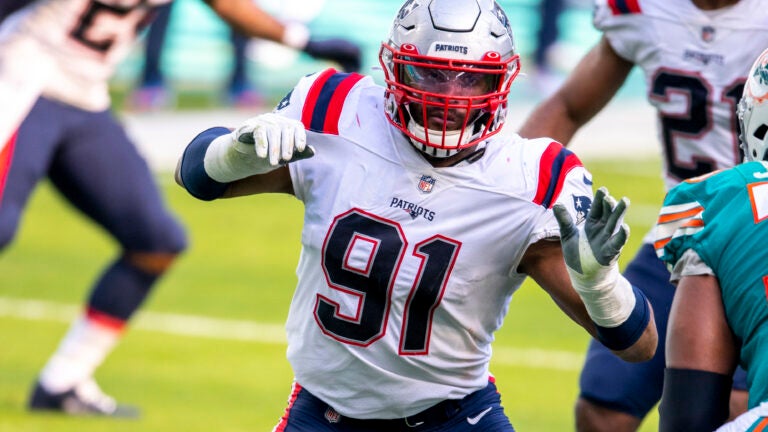 Deatrich Wise Jr. says Patriots are ‘hungry’ to return to dominance in 2021