On its face, the Patriots’ selection of Oklahoma edge defender Ronnie Perkins in the 2021 NFL Draft might have come as a bit of a surprise.

Couldn’t that pick have been better spent on a wide receiver, a cornerback, or an offensive lineman?

Even if the answers to all those questions were “Yes,” there’s still a lot to like about Perkins, whom the Patriots grabbed with the 96th overall pick after many analysts projected him to go in the second round.

He might also be just the kind of player that becomes reaches new heights in the NFL under Bill Belichick and his coaching staff.

The scouting reports on Perkins don’t speak glowingly of his raw athleticism, and he doesn’t have elite size (standing at 6-foot-2 and weighing 253 pounds) or strength for an edge player.

But the production and effort he puts on film show more than enough disruptive potential to work with.

If you’re going to play outside in a defensive front, your first responsibility is to set the edge in the run game. And though Perkins doesn’t have the long arms and violent punch evaluators look for in a prototypical edge defender, he still earned elite marks from Pro Football Focus as a run defender in 2020.

Plays like this one in the 2020 Cotton Bowl against Florida give a glimpse into why.

He utterly destroys this quarterback power run first with speed, splitting through an attempted down block by the tight end, then with power, overwhelming the pulling guard before making the tackle for loss.

He’s particularly adept at taking on pullers or blocks coming at him from an angle, using excellent short-area quickness to sidestep or lowering his shoulder into a blocker to stop their momentum as he does here.

These plays also demonstrate above-average awareness as he keeps his eyes up both to identify oncoming blockers and diagnose running lanes quickly before finding the football. You don’t rack up 24 tackles for loss in your last two seasons without having a good understanding of what offenses are trying to do — especially if you’re not an unstoppable physical force.

If he learns to use his arms and hands as well as his shoulders, his run defense will only improve.

The same goes for his pass-rushing, which could benefit from the addition of more nuanced moves and hand-fighting techniques.

That said, his endless motor and ability to convert speed and quickness into power suited him perfectly well at the college level and should carry over into his NFL career.

Like his new teammate Barmore, Perkins has shown the capability to do more than just bullrush or dash around the end, mixing in some well-timed club moves as well as the grip-and-pull technique he demonstrates here once he gets into a blocker’s body.

And if you get too caught up in waiting for Perkins to get into your chest or run around you, you might catch an outstretched arm stab to the chest and end up on your back.

That right tackle he just gave the Khalil Mack treatment to? 6-foot-6, 320-pound Teven Jenkins, whom the Chicago Bears moved up to select 39th overall in the draft — one pick after Barmore.

Perkins made starting-level NFL talent look silly on more than one occasion during his college career. That said, it’s fair to have concerns about how he’ll do against stronger, more experienced competition if he doesn’t add more variety and raw strength to his game.

He did have 11.5 sacks in his final two years at Oklahoma, but it’s near-misses like this one that makes you wonder how many more he’d have if he could bend the edge a bit better after winning his rush.

Still, Perkins’s production despite the elite measurables scouts crave speaks well of what he can do with the right coaching, and it’s hard to think of a better person for a young defensive player to learn under than Belichick.

Though the rookie edge defender will have to wait his turn behind the likes of Van Noy and Judon, Patriots fans are likely to see him on the field sooner rather than later — and might be treated to a splash or two when they do. 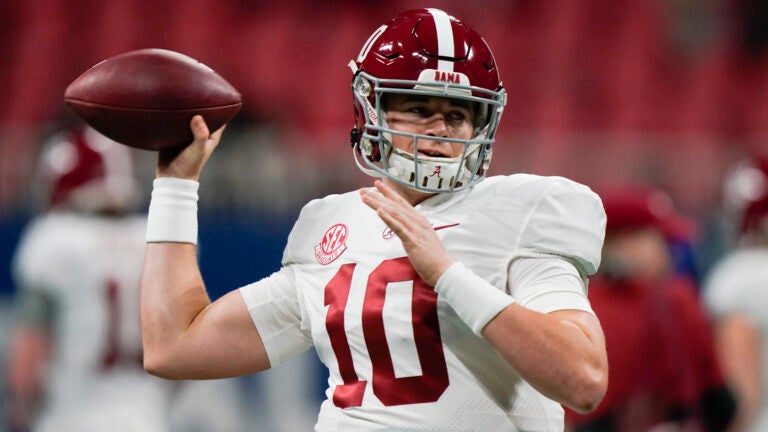