The NFL Draft may be past us, but the debate over the 2021 draft class rages on.

Entering the draft, Mac Jones was one of the most debated prospects as rumors swirled of him possibly getting picked by the 49ers with the No. 3 overall pick. Of course, Jones wasn’t picked by San Francisco and ended up in New England, who took him with the 15th pick.

In an article for ESPN.com, Adam Rittenberg found that the debate on Jones among college coaches was as polarizing as the public debate surrounding the now Patriots quarterback.

“Mac Jones was the most ready out of those quarterbacks,” an SEC head coach said to Rittenberg. “You talk about somebody who could throw into a tight window, somebody who could make all the throws. Everybody talks about the arm, but his arm is big enough.”

The SEC head coach wasn’t the only one who felt strongly about how good of a prospect Jones is.

“[Jones is] the best guy I saw,” a Big 10 offensive coordinator told Rittenberg. “That might be the best pick of the first round. … The ball was always where it should be, when it was supposed to be there, and the receiver always had a chance to do something with it.”

While some college coaches focused on Jones’s upside and strengths (such as his accuracy), one college coach was more concerned with Jones’s weaknesses and wondered if his strong 2020 season was really a product of the talented Alabama team surrounding him.

“I was not surprised that he dropped,” a coordinator from a Power 5 conference said. “He was just throwing routes versus air to the best players in the country with an unbelievable running back, awesome blocking. I don’t see his game translating. He might prove me wrong, and if anybody can do it, it’s the Patriots.”

The other noticeable weakness in Jones’s game viewed among scouts is his lack of running ability. This past season, Jones ran for just 14 yards and had only 42 rushing yards over his college career.

In the same story, multiple coaches told Rittenberg that Oklahoma defensive end Ronnie Perkins may have found a good home in New England. The Patriots selected Perkins in the third round of the draft. Perkins had 5.5 sacks and 10.5 tackles this past season in six games but missed five games due to a failed drug test. 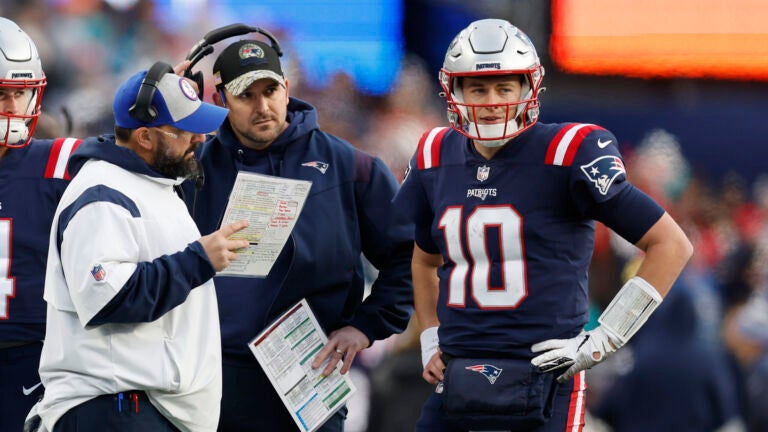