More than a few Patriots players have reflected on the disappointing 2020 campaign as a “learning experience” this offseason.

So does rising second-year offensive lineman Michael Onwenu, who reflected on his “anxious” pandemic-altered rookie workouts and training camp in a media conference call Tuesday.

“The offseason was at home and virtual. So coming into the building, I didn’t really know what to expect,” he said.

Then came the season itself, which saw the 2020 sixth-round pick out of Michigan quickly pressed into service. He started every game of last season and played every Patriots offensive snap after Week 3, jumping between guard and tackle.

His performance earned him plaudits from across the football world, including rankings among the league’s best blockers in his first year. But the team as a whole struggled to a 7-9 finish.

Now, Onwenu and the Patriots are looking forward to a fresh start in 2021 as they continue OTAs this week. So far, he says things feel more normal than they did a year ago with pandemic restrictions slowly being relaxed.

“The practices have been good,” he said. “Everyone’s getting back in sync working together. It’s been a while since everyone has been together.

“Everyone’s been building camaraderie, everyone’s getting to know each other. We have a lot of new faces, so definitely this time has been good for us with guys hanging outside of the building.”

The laser-focused Onwenu says he hasn’t yet had much time to catch up with his fellow Michigan Wolverines on the Patriots — second-year linebacker Josh Uche and rookie linebacker Cam McGrone.

But he has had an early scouting report on the man everyone in New England is most excited about: first-round quarterback Mac Jones.

“I think he looks good all around. I think he fits the personnel and fits the team,” Onwenu said.

When might he be blocking for the future of the franchise? Who knows?

But regardless of who starts at quarterback, Onwenu could join a starting offensive line group that could be among the league’s best, including center David Andrews, tackle Isaiah Wynn, guard Shaq Barrett, and one-time Patriots right tackle Trent Brown. The second-year swing offensive lineman may well be the favorite to replace departed left guard Joe Thuney, though he’ll face veteran competition from interior lineman Ted Karras.

“Everyone’s taught the same thing,” he said. “In the job, as a whole, it’s next man up. Anyone and everyone has to be ready.”

For his part, Onwenu (unsurprisingly) says he doesn’t have a preference for guard or tackle: “Wherever I’m needed, that’s where I’m at.” He also noted he’s prepared for both this offseason and believes it won’t be a big adjustment to play in either spot.

“I just approached the offseason doing the basics,” he said. “The general rules will lead you and carry you along in the season, whatever [you play] position-wise. As long as I’m doing the technique my coaches are teaching, I think anywhere that I am, I’ll be pretty good.” 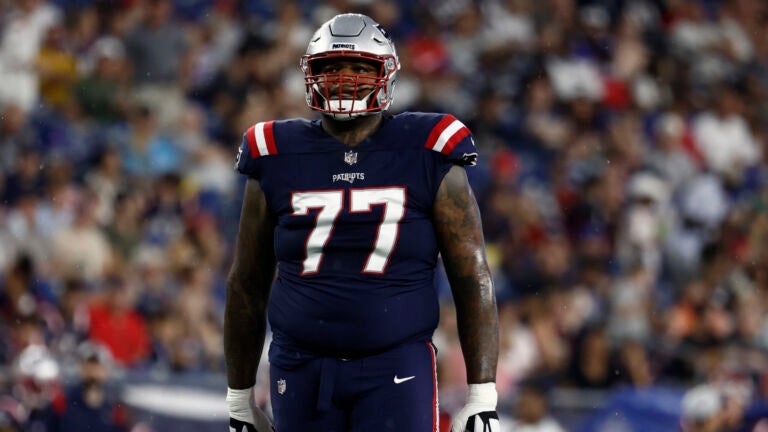 Patriots rule Trent Brown out for Sunday’s game vs. Jets