The Celtics will host the Nets for Game 3 of the Eastern Conference first-round matchup on Friday at 8:30 p.m. Brooklyn leads the series 2-0.

And the Bruins officially know their second-round playoff opponent after the Islanders eliminated the Penguins on Wednesday.

Bill Belichick on Adam Vinatieri: On Wednesday, 48-year-old Adam Vinatieri announced that he was retiring from football after 24 seasons in the NFL.

Vinatieri, who played for the Patriots for a decade, helped New England win three Super Bowls in four seasons. He drilled several clutch postseason field goals (including two Super Bowl-winners), but remains most famous for the iconic 45-yard field goal to tie a 2002 playoff game against the Raiders in a snowstorm at Foxboro Stadium.

Bill Belichick, in a statement following Vinatieri’s announcement, gave the former kicker the highest of praise.

“Adam Vinatieri is the greatest kicker of all-time who made the greatest kick of all-time in the 2001 divisional playoffs,” said Belichick. “His consistency, mental toughness and performance under pressure was legendary. I am honored to have coached Adam, going all the way back to his rookie year in 1996 and through some of the most special moments in Patriots and league history. Adam is in the rarest of echelon of athletes whose career accomplishments may never be matched.”

During his Thursday press conference, Belichick offered more on Vinatieri.

“[He] made so many big kicks,” Belichick recalled. “We were in so many close games during the time when he was here and I was the head coach.”

“One thing with Adam, you never felt the pressure of the moment, and he certainly didn’t seem to,” the Patriots coach added. “So it gave me and our team great confidence.”

Belichick closed with a strong endorsement for Vinatieri’s Hall of Fame candidacy.

“Tribute to him and his great career, and I’m sure we’ll place him in the Hall of Fame in five years. That’s where he should be.”

Trivia: Unbelievably, Adam Vinatieri isn’t the oldest player to ever play in the NFL. Who holds that record?

Hint: He retired as a member of the Oakland Raiders in 1976.

The latest report on Julio Jones:

It’s the first time the Bruins and Islanders have met in the playoffs in decades:

The Bruins’ dominance through the first round of the playoffs:

On this day: In 2011, Nathan Horton’s goal and an impressive defensive performance sent the Bruins to the Stanley Cup Finals after a 1-0 win over the Lightning in Game 7 of the Eastern Conference Finals.

Daily highlight: The Europa League final between Manchester United and Villareal went to penalty kicks on Wednesday. Incredibly, the first 20 penalty takers converted, meaning that each team’s goalkeeper had to step up and take one as well. 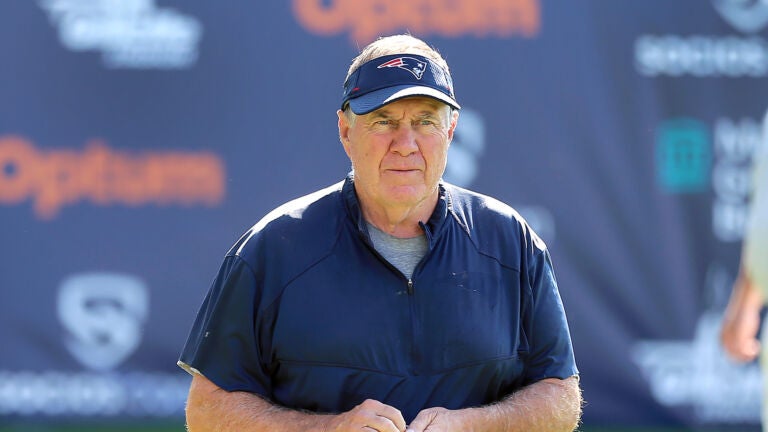