Bill Belichick cut right to the chase when asked by reporters Thursday morning about Cam Newton’s availability at the Patriots final OTA practice.

And there you have it: the slight bone bruise Newton reportedly suffered at last Friday’s practice will keep him out of the Patriots’ final OTA practice. Other reports suggest the injury could sideline him for next week’s mandatory minicamp as well. Belichick did not offer a timetable for his return.

But the coach didn’t seem overly worried about Newton’s long-term availability. “No,” he answered when asked if he believed the hand injury to be serious. “I think he’ll be alright.”

But Belichick didn’t offer any details about how those reps will be divided up between the remaining three quarterbacks (Jones, Stidham, and Brian Hoyer), leaving that decision up to offensive coordinator Josh McDaniels.

The head coach also declined to give any specifics about Jones’s development during this time and what the team hopes to see from the rookie passer.

“I think everybody is coming along,” Belichick generalized. “There’s a lot of teaching, a lot of instruction for anyone who hasn’t been in this system…they’re all working at it. Mac’s working at it like everyone else.”

Belichick also demurred on questions about the quarterback competition as a whole: “There’s competition at every position. I think any good professional player, any good football player has basically the same mindset: to improve his individual performance and go out there and perform as well as he can.”

He reiterated that the team is not in an “evaluation” phase yet with its players, saying that time won’t come until the pads come on next month.

“We’re in the teaching [phase] and trying to get the team to a point where we can compete against each other and in preseason against our preseason opponents or joint practices or whatever the case might be,” he said. “Those will be the real evaluation periods.” 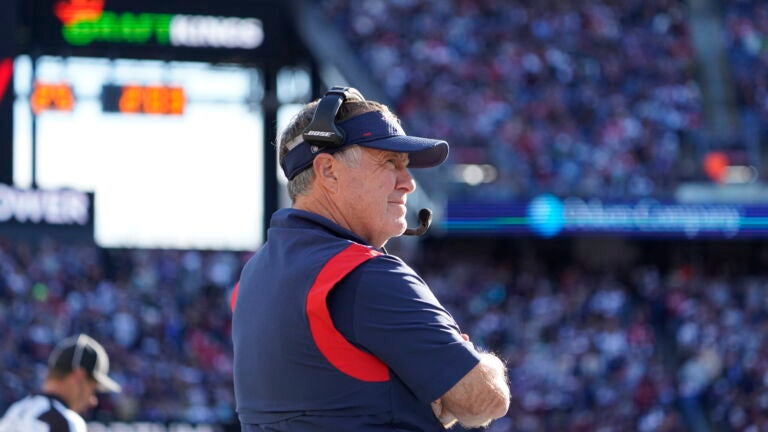 What Bill Belichick had to say about Kendrick Bourne's touchdown pass