On a day when one veteran, Cam Newton, missed practice because of an injury suffered last week, a multitude of other Patriots veterans made headlines at Thursday’s OTA practice — the final one for the team this spring.

Aside from a few notable exceptions — Newton, Stephon Gilmore, Isaiah Wynn, and James White, to name a few — Thursday’s practice had the feel of a more complete squad than ever before heading into mandatory minicamp next week.

Media saw the much-awaited return of veteran linebacker Dont’a Hightower after weeks of speculation about his health and readiness for the season.

The starting defensive unit as a whole looked more complete than in weeks past, with veteran defensive backs like Devin McCourty practicing.

And running backs Damien Harris and Rhamondre Stevenson saw their first action this year as well.

But let’s not bury the lede too much further. How about we break down the performance of the best Patriots player on the field today?

The veteran signal-caller wasn’t the first man in during quarterback and team drills today — Jarrett Stidham claimed that honor after a solid practice last Friday.

But Hoyer made the most of his reps and showed off both an arm many don’t know he has and what that arm can do when it knows an offense backwards and forwards.

The journeyman quarterback slung the ball all over the field and pushed the ball deep more than either of the other two quarterbacks. He connected with Isaiah Zuber on a deep post just over a leaping Myles Bryant, hit Kendrick Bourne and Gunner Olszewski on long corner throws, and dropped a perfect deep ball in the bucket to Devin Asaisi on a seam route — some of the best throws we’ve yet seen during OTAs.

Of course, none of this means Hoyer is now a contender to start games for the Patriots or even get meaningful training camp snaps.

That said, his command of the offense is obvious. He knows where everyone is supposed to be. He knows what the defense is doing. And he knows when to take his shots down the field.

That’s the experience and perspective the Patriots hope he passes on to the likes of Stidham and Jones.

Another “meh” day for Mac Jones.

Anyone who expected Jones to get a lion’s share of the reps with Newton out got a shock Thursday. Stidham and Hoyer went first and second on almost every drill or team segment, with Josh McDaniels often coaching up Jones on the side as he watched and learned.

When he did get a chance, the rookie showed improvement from last week, faring better against the Patriots defense on the whole.

During 11-on-11s, he hit a quick anticipation throw to Zuber on an out route — a true “hit-your-back-foot-and-fire” play that looked crisp and confident. He also had another solid throw on a slant to Bourne in the same segment.

But the difference between his and Hoyer’s performances Thursday struck a chord. It wasn’t about the differing results the two saw so much as the process by which they got them. In particular, it shows how far the rookie is (not surprisingly) from mastering the offense.

Whereas Hoyer has seen a great deal more football, knows when and where to attack down the field, and isn’t afraid of making mistakes, Jones is clearly still feeling things out.

On one hand, he did complete his first passes of the spring to wide receivers in team drills. But he still attempted just one throw that traveled further than 10 yards, which may have been his first in the three OTA practices media has seen. The throw was good, but it was dropped by Kristian Wilkerson.

The rest of the time, Jones played it safe as he has throughout OTAs, while both Hoyer and Stidham continued to air it out and find receivers down the field. A few times, it looked like Jones wanted to go vertical but just couldn’t pull the trigger and kept it short.

One more comparison: on one of Hoyer’s last reps of 11-on-11s, he beat pressure by throwing an out route to Zuber, releasing the ball before the receiver even turned to find the ball and placing it perfectly along the sideline.

A few plays later, Jones put a swing route too far ahead of Rhamondre Stevenson and then held the ball for a sack while facing pressure on both snaps.

He didn’t show the innate feel for delivering the ball on target with touch or anticipation a bit ahead of schedule with a rush in his face. But that can still come with more experienced.

As the game slows down for Jones, we might see more of the downfield aggressiveness he showed at Alabama as well as the poise under pressure. Right now, though, he’s still working on putting his understanding of the offense into practice against moving opponents.

Dont’a Hightower, other veterans work their way back.

Hightower took it slow in linebacker drills, easing his way around the cones while others sprinted a bit harder. Later, he blitzed on a stunt in team drills at quite a bit less than full speed, as if he was trying to remember what it felt like to make those steps more than actually make them.

But it was still a welcome sight seeing No. 54 on the field in a blue jersey for the Patriots, even if it was just for OTAs.

Hightower worked with something of a “starting” linebacker crew in Josh Uche, Kyle Van Noy, and Deatrich Wise Jr. during 3/4-speed walkthroughs against the offense, directing traffic and giving the offense a look. But he didn’t start with the “1s” in team drills as he works his way back into football shape.

He wasn’t the only Patriot the media saw for the first time this spring.

Starting safety Devin McCourty was back deep for the defense, working alongside a rotation of Adrian Phillips and Kyle Dugger. J.C. Jackson also took the field for the first time, giving the starting secondary a nearly complete look. (Gilmore is the last missing piece.)

The lack of time together seemed to manifest itself on a few occasions. The starting offense had a much easier time moving the ball against the secondary than last week, with McCourty and others at time pointing to suggest someone missed an assignment. But it’s better to make those mistakes now, right?

On offense, the massive Trent Brown was back on the offensive line. With Wynn still out, he manned the left tackle spot. Michael Onwenu slid to right tackle while Ted Karras played left guard with the first offensive line unit.

With mandatory minicamp coming up next week, we’ll see if the last pieces (aside from perhaps Newton) finally slide into the puzzle.

Without Nelson Agholor in the mix at receiver today, Bourne led the way in most position drills.

Then when the bodies started flying, No. 84 was one of the favorite targets for all three quarterbacks when he was on the field. His route-running looks crisp, and he seems to always be adept at working his way open against zone coverage.

Jakobi Meyers continued his strong OTAs, getting both feet inbounds for a nice sideline grab from Stidham.

Zuber also had himself a nice day as he tries to prove himself more than an afterthought in the revamped receiver room. He got open on quick strikes and had the longest play of the day on the deep post from Hoyer.

Marvin Hall didn’t make too many splashes in the team segments, but his quickness and speed down the field were apparent as he got work in with the quarterbacks. He also worked as a return man in special teams drills, something that could help his value.

All in all, not many balls hit the ground in position drills or in team segments — a welcome sight after the defense dominated last Friday’s workouts.

–Hunter Henry slipped and fell during the first 11-on-11 segment during a completion from Jones to Bourne. He got up gingerly but walked off the field under his own power.

Later, he seemed to be favoring his left leg as he tried to jog things out on the sideline during special teams play. He sat out the remainder of the practice.

–Running back Damien Harris was excited to be back. Really excited, in fact. During offensive walkthroughs, he stopped and celebrated at the end of his carries with the first-team offense — even with no live defense trying to stop him.

Rhamondre Stevenson worked behind him in that segment and showed that intriguing burst and acceleration for a big 230-pound back. Later, he worked as part of the kickoff return blocking unit and had a solid pass-protection rep in 11-on-11s, smoothly picking up a blitz from Dugger.

–Stevenson’s Oklahoma old teammate Ronnie Perkins was heard from this practice as well, storming around the left end past Onwenu for what would have been a “sack” on Stidham in 11-on-11s. Josh Uche looks fast off the edge as well, providing pressure on few snaps in team segments.

The Patriots will have some healthy competition among their young edge rushers for snaps this year, an encouraging sign for the future. 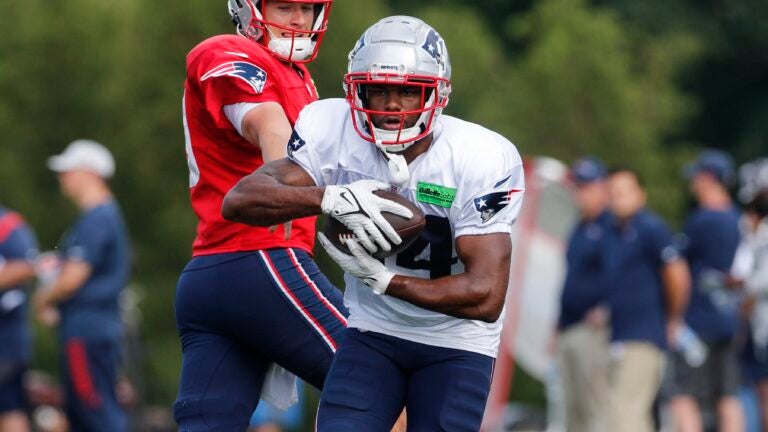