The weather was far from idyllic at the Patriots’ first mandatory minicamp practice on Monday.

Rain alternated between drizzling and pelting throughout the nearly three-hour session, with balls slipping to the turf and passes hitting the ground you wouldn’t normally expect to see.

Receivers slipped and fell in and out of their breaks, and the team segments looked slower and slightly less competitive than they have over the past few weeks.

Plus, the cloud of All-Pro Stephon Gilmore’s absence from mandatory practices hung over the affair with questions about his health and future with New England looming.

But work still got done at the Patriots practice fields Monday with the team at nearly full strength, with a few key players returning, including Cam Newton, Mac Jones making his mark, and a key free-agent signing showing his importance.

Here are Monday’s notes and observations from the Patriots’ first day of mandatory minicamp.

Cam Newton is back and looks healthy.

During his first 11-on-11 segment, Newton scanned the defense down the field then saw Brandon Bolden running a short route out of the backfield with Kyle Van Noy in the vicinity.

Newton cut it loose with Van Noy swiping over the top to knock it down. But the ball had enough juice to fly beneath the linebacker’s hand and into Bolden’s gut for the completion.

It wasn’t much, but it was a sign that Newton’s bruised right hand is doing just fine as is his arm strength.

The veteran was back in practice Monday and took over the lion’s share of the quarterback reps once again, with Jones and Stidham alternating as the “backup” behind him.

He threw the ball with good velocity despite the rain, though he at times struggled to find his touch and sailed a few balls near the red zone.

He also couldn’t connect with the speedy Nelson Agholor on his three attempts at deep throws, overthrowing two of them while Agholor dropped the third in tight coverage.

But Newton also had a couple of impressive throws to tight end Hunter Henry in 7-on-7s, including a 20-yard rope on a corner route to his left.

When the veteran wasn’t throwing, he could be seen at times creeping near to the huddle when his understudies were calling plays, trying to earn extra mental reps.

The most important thing about Monday’s practice for Newton, though: he got through it healthy, and there didn’t appear to be any obvious issues for him throwing the ball. That’s good news for him and the Patriots.

Jones’s first eye-opening moment of Monday’s practice didn’t come during team sessions or any throw he made in drills.

It happened in an early walkthrough against a scout defense.

On one snap, the rookie threw a hard count at the defense against a potential blitz and pointed to his helmet while looking at his receivers, who nodded in acknowledgment. Then, after another hard count, he changed the play, moving from a single-back formation under center to and shotgun empty spread.

Jones then took the snap and dumped it off quickly in the flat to the running back to negate the oncoming pressure.

There was that pre-snap acumen everyone is so excited about with Jones on display again early in his rookie year.

He also put it into practice later during more competitive two-minute and red zone drill situations, making crisp decisions and delivering the ball confidently and on time.

The rookie even showed off his arm more than he has in past weeks, with his highlights including a deep seam-route throw to Gunner Olszewski during 7-on-7s and a back-shoulder fade to Jakobi Meyers in two of his longest completions in media-accessed practices.

Jones’s accuracy remained solid in the rainy conditions even as other quarterbacks appeared to struggle and sail throws, though he also missed one or two in drills and had one batted at the line of scrimmage in 11-on-11s.

He hasn’t always looked like a quarterback that can step in and lead an NFL offense as a rookie. But the flashes of that potential were there on Monday.

Jalen Mills proves his worth.

With no Gilmore in the mix, it was next man up for the Patriots’s defensive backfield.

Moments like this are exactly why the team signed the jack-of-all-trades Mills in the off-season.

Mills took over the left cornerback slot normally occupied by Gilmore with the starting defense, playing opposite starting corner J.C. Jackson. He didn’t look out of place, even making a nice pass-breakup on a throw from Stidham to Gunner Olszewski in 11-on-11 drills late in practice.

With Gilmore rehabbing a partially torn quad and his future with the team uncertain, Mills might be needed there.

The two-tight end system has arrived.

With Jonnu Smith in the fold, the Patriots finally got to show off bits of their two-tight end looks with Henry and Smith on the field together.

The two frequently lined up together both as run blockers and as pass catchers, at times opening up throwing lanes for one another in team drills.

Newton seems to be developing a rapport with Henry, hitting him on the aforementioned corner route during 7-on-7s and finding him later in the same segment on a well-thrown out route.

Smith, meanwhile, ran solid routes and looked fast in his first practice in front of media. But he struggled a bit with drops in the rainy conditions. He also appeared to tweak his left hamstring in the subpar conditions and left practice early, walking around without his helmet trying to stretch things out.

His status might be uncertain for the rest of camp and especially for tomorrow, with more rain in the forecast.

But when Henry and Smith are healthy down the line, it seems likely teams are going to get a double-tight-end helping quite often in 2021.

–The offensive line was back in its entirety for the first mandatory practice, with Isaiah Wynn slotting in at left tackle and bumping Trent Brown back to the right side. Michael Onwenu (left guard), David Andrews (center), and Shaq Mason (right guard) rounded out the interior.

Ted Karras frequently rotated in at the interior line positions during walkthroughs, jumping in at both guard positions and center. The newly re-signed Patriot will almost certainly prove to be the top backup (along with Onwenu) at all those positions.

–Gunner Olszewski only has seven career receptions for 96 yards coming into this season. But if this year’s buildup to camp is any indication, he’ll have a chance to at least double those numbers this year.

The third-year receiver has been a frequent target of all four quarterbacks this spring with his shifty, quick routes underneath. He has worked well alongside the likes of Jakobi Meyers and Kendrick Bourne and has been more noticeable than fellow backup receivers N’Keal Harry and Isaiah Zuber at times.

Nothing is guaranteed this early in the preseason process. But Olszewski is making a strong initial case to make the final roster with his improved play at wide receiver in addition to his return ability.

–Kyle Van Noy should have had the first interception of the media-access OTA sessions two weeks ago, but he dropped the gift-wrapped throw from Mac Jones and did 10 pushups as punishment for the miscue.

He wasn’t letting another one slip through his hands.

Van Noy made a leaping snag of a Brian Hoyer throw over the middle during 11-on-11s and took it the other way much to the delight of the defense.

Later, Joejuan Williams grabbed another Hoyer pass off of a tip in 7-on-7s for the second defensive takeaway of the day.

Still, just two interceptions in four practices the media has had access to? That’s not bad compared to other teams.

–Harry is still trying to find his way in the Patriots wide receiver rotation, but he stood out a bit more than he has since spring camp started.

His highlight of the day was a leaping grab of a deep comeback route from Newton during 7-on-7s, with the quarterback coming to him as a secondary option.

That’s exactly the kind of play the big-bodied Harry has been expected to make but hasn’t his first few seasons.

But the third-year receiver has apparently come into this season a bit slimmer as he tries to improve his ability to separate from defenders — something he struggled badly at last season. 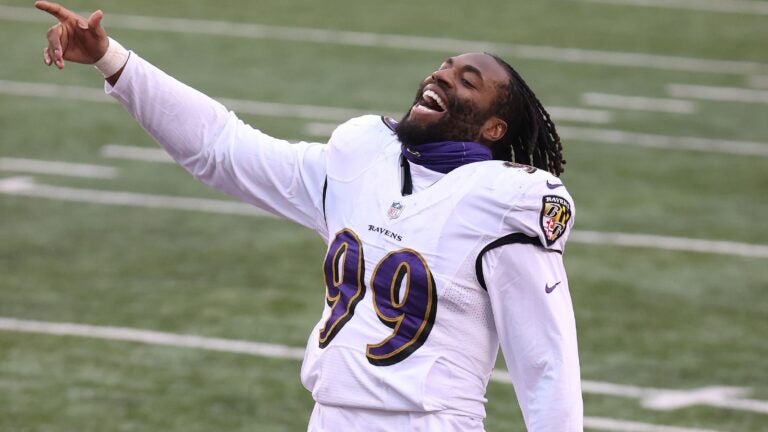