The Patriots’ burgeoning quarterback competition appeared to take another turn Wednesday, with Cam Newton struggling after a big Tuesday performance and Mac Jones rebounding from arguably his worst practice yet.

Offensive coordinator Josh McDaniels sees what everyone else watching the Patriots practice sees, of course. He knew what went wrong on Newton’s two practice interceptions and Jones’s multiple interceptable balls on Wednesday on a fundamental level, and he knows what goes right on their best completions.

But the man who runs the Patriots offense isn’t worried about the training camp practice box score. Well, not that much — “I know how many completions and incompletions we have because I am an offensive coach,” he told reporters after Wednesday’s half-padded session.

For McDaniels, the key during the opening practices of training camp is “the process.”

Getting the offense into the right play. Making the right calls on blitz pickups. Throwing the ball on time to the correct read.

That’s something he indicated Newton, who struggled through last season, has improved at in his second year with the Patriots.

Though McDaniels noted that Newton “was trying to do everything I said” last season, it took the quarterback, who spent his first nine seasons with the Carolina Panthers, time to adapt to the Patriots’ offensive scheme and to his coaching. Time for learning was especially short due to last year’s abnormal training camp and Newton’s late arrival to the team in free agency.

This year, though, the coach has noticed Newton’s progress on a conceptual level.

“Now, he actually understands the why on most things,” he said. “That is really the goal for the quarterbacks — when you’re out there trying to read defenses on a play-to-play basis, if you don’t understand why we’re doing something or why you’re supposed to make the protection slide here or there, it’s a tough position to play. The game has slowed down for him. The offense makes a lot of sense. Like I said, there’s a lot less new learning for him.”

When asked what makes him believe Newton can improve on a dismal 2020 showing as a passer, McDaniels had a simple answer: “I see it. You can just see it.”

It’s worth noting, of course, that Jones has made plenty of strides on his own, at times recalling the quick timing and efficiency seen during Tom Brady’s years in Foxborough.

But don’t look for McDaniels, who is seen coaching Jones up after nearly every segment, to puff up the rookie’s ego.

“He’s good at getting yelled at,” he said of Jones. “He probably thinks his name is not Mac sometimes.”

Though Jones has largely been steady in his first NFL training camp, he’s come up against bits of adversity over the last week, including a rough stretch last Thursday that left him fuming at the end of practice.

Still, the No. 15 overall pick has gotten his fair share of reps at training camp thus far and, aside from one day, has made a good impression with his accuracy and ability to navigate progressions.

“It’s never been perfect in training camp,” McDaniels said of those teachable moments. “I mean, half of that is because we’re out there playing against good players on defense and they make plays too. Our coaching staff on the other side is very challenging. There’s gonna be some days and periods where we look better than others. But that’s the part of the process that we enjoy.”

Though it’s difficult to say that Jones has truly looked better than Newton with only one padded practice in the book — which Jones struggled in — the rookie has garnered praise from all corners of the Patriots locker room and appears to have the tools to succeed in the NFL, now or eventually.

For his part, McDaniels didn’t give any indication of whether he sees either Newton or Jones ahead of the other, he did acknowledge that whoever earns the starting job has a clear mandate for 2021. 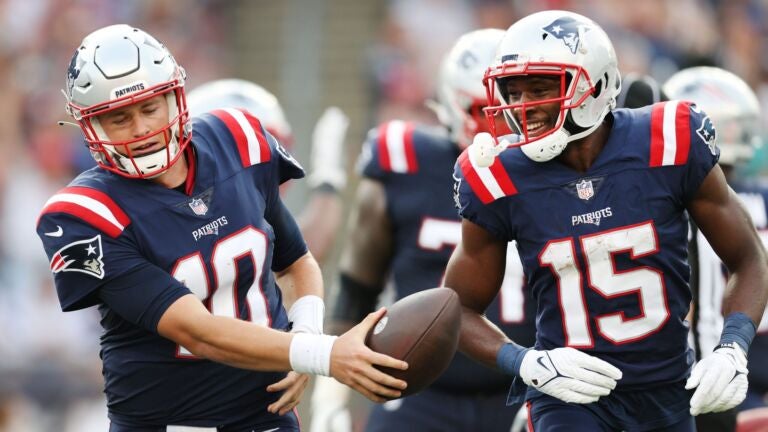