Former Patriots offensive coordinator Charlie Weis was a fan of Mac Jones in the leadup to the NFL Draft. Months later, with Jones now in New England and a couple of impressive preseason games under his belt, Weis isn’t taking a victory lap yet, but he’s not surprised by what Jones is doing.

In his first two preseason games, Jones has completed 26 of 38 passes for 233 yards. While he hasn’t thrown a touchdown, Jones has led the Patriots to a score in five of the 10 drives he’s played in (one of which was a kneel down to end the first half).

Jones’s latest training camp feat came in a joint practice with the Giants on Wednesday. With Cam Newton out due to COVID-19 protocols, Jones completed 33 of 37 passes over multiple drills while playing with the starting unit.

“I think the fact that he’s coming from Nick (Saban)’s program puts him in a different vein than all these other guys,” Weis said, via Curran. “These Alabama guys are more ready to go. I think you have to factor that in.

“You can’t disregard the pro coaches that he’s getting at Alabama. Whether it was when (Brian) Daboll was there or (Steve) Sarkisian was there, Nick as the head coach. This guy is more ready to go mentally than all those other guys. He understands the pro game at a very, very high level.”

In February, Weis touted Jones’s accuracy and record at Alabama as reasons for teams to draft him, comparing Jones to future Hall-of-Famer Drew Brees. With those factors and Jones’s strong preseason in mind, Weis believes Jones gives the Patriots their best chance at winning.

“I’m kinda rooting for it to be Mac (as the starter),” Weis said. “I’m not rooting against Cam (Newton). I just thought that Mac was the perfect fit. If they wanted to go back to running the offense that I was used to seeing in New England, I thought that gave them the best fit.”

Weis isn’t alone among former Patriots assistant coaches to praise Jones. Longtime Patriots offensive line coach Dante Scarnecchia was impressed by what he saw from Jones on tape from his time at Alabama.

“When I watched their tape and saw the things they did, and the sophistication of it, you could see (Jones) is pretty special,” Scarnecchia told ESPN’s Mike Reiss. “… He’s smart. Gets the ball out fast. Knows where to go with it probably before the ball is snapped, which I think is half the battle. Pre-snap read, what are you seeing? Post-snap, what it really is, and then get the ball out when it is supposed to be out. He does all that.”

Scarnecchia also had praise for Newton and the Patriots’ coaching staff for how they’ve handled the quarterback situation this preseason.

“I watched the quarterbacks to see what they look like after all the things that have been said. I was really, really impressed by both the quarterbacks,” Scarnecchia said.

“It looks like Cam (Newton) has better command of the offense, and the ball seems to be coming out a little bit faster. And I think what they’re doing with Mac Jones is everything. They’re lining up in stuff that has gone beyond Basics 101 and into other things — the empty backfield sets, the protection adjustments, all the stuff that goes with it. And he seems to be doing very well with it all.” 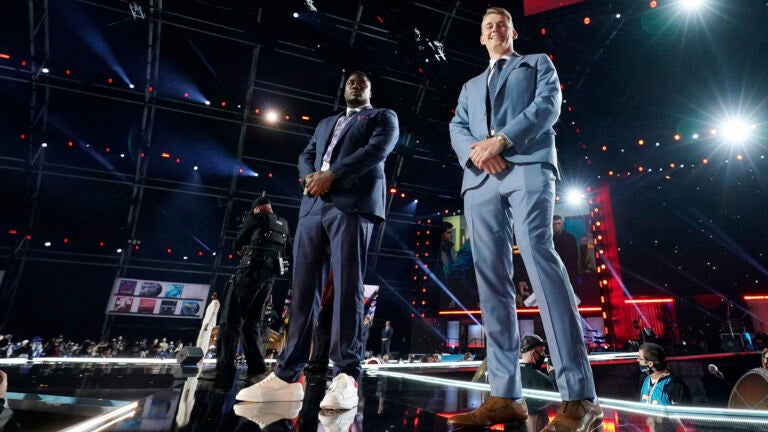