The formation of the 53-man roster this week is only the beginning when it comes to assessing with the 2021 Patriots will look like.

In fact, with the specter of COVID-19 continuing to hover over the NFL this season, one could argue the team’s 16-player practice squad could be just as interesting as who made the team in the first place.

To this point, the Patriots have officially signed 12 players to the practice squad, including a couple of veteran quarterbacks to back up newly minted starting quarterback Mac Jones. The first-round rookie is currently the only quarterback on the 53-man roster after both Cam Newton and Brian Hoyer were released on Tuesday.

But as you’ll see, you can’t get rid of Hoyer quite that easily.

The Patriots also didn’t lose any of the players they placed on waivers to other teams, allowing them to sign back several familiar faces to the expanded practice squad.

What’s more, practice squad rules let teams fill up to six spots with veteran players who have played more than the two accrued seasons typically allowed. That’s why you’ll see a smattering of experienced players among the younger prospects New England is looking to develop for the future.

Here are the current (and prospective) members of the Patriots’ practice squad to date.

Hoyer’s is the most consequential name on this list.

The Patriots could have kept the veteran quarterback on the 53-man roster but opted to release him and sign him to the practice squad instead. But for all intents and purposes, he is the backup quarterback on this team and will serve in that role Week 1.

Per the new roster flexibility rules enacted last year during the pandemic, the Patriots and other NFL teams can promote two players from the practice squad to the active roster each week without having to make a corresponding cut on the 53-man roster. Essentially, you get 55 men on game day rather than 53.

New England can only do this twice per practice squad player, though. So the Patriots will likely elevate Hoyer for the first two weeks of the season and put him on the active roster for Week 3 if he remains the backup.

Folk is also an interesting case.

Though the Patriots chose to keep Quinn Nordin on the roster than allow the bazooka-legged kicker to get snapped up on the waiver wire, that doesn’t mean the kicker competition is completely over now that Folk is on the practice squad.

If Nordin starts to falter in practice or in games, the Patriots could easily turn back to the more experienced Folk, who kicked well last season. They could simply cut Nordin (possibly to bring back to the practice squad) and promote Folk permanently to the active roster.

LaCosse might be a candidate to move back to the active roster or be a game-day elevation sooner rather than later. He looked reliable in camp before sustaining a concussion during joint practices with the Eagles, and the Patriots could use insurance at the position with Hunter Henry and Jonnu Smith both fighting off nagging injuries in camp.

Similarly, we could see Bryant and Wilkerson get opportunities with the defensive backfield or the wide receivers, respectively, if injuries hurt either position group. Bryant probably would’ve made the team if he wasn’t hurt in the preseason, and Wilkerson flashed potential as a downfield target when he wasn’t dropping the football.

Also, keep an eye on Tavai and Mason, who both reportedly signed with the practice squad Wednesday.

Tavai was a draft pick of current Patriots staffer Matt Patricia and provides a little extra depth behind Ja’Whaun Bentley and Harvey Langi at inside linebacker.

Meanwhile, Mason could challenge Jakob Johnson for the fullback job. The former Michigan Wolverine was a 2021 draft favorite of Patriots fans who found his way to Foxborough on the road less traveled.

As of now, that list comprises 15 names — one short of the 16-player limit allowed on the practice squad. That means another move could well be forthcoming and that the Patriots’ overall roster scheme isn’t complete yet. 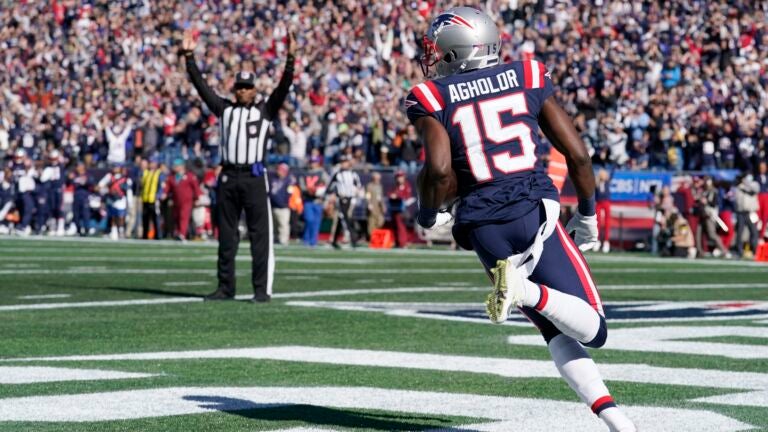