Mac Jones is the Patriots’ starting quarterback, and the oddsmakers are already projecting how well he’ll play this season.

Moments after the news came out that Jones would be the starting quarterback after Cam Newton was released, his odds to win Offensive Rookie of the Year shot up on several betting websites.

DraftKings Sportsbook has Jones to win Offensive Rookie of the Year at +600 (meaning you’d win $600 on a $100), trailing just Jaguars quarterback and No. 1 overall pick Trevor Lawrence, who’s listed at +400.

The other three first-round quarterbacks (Zach Wilson, Trey Lance, and Justin Fields) are each listed at +750 while Steelers running back Najee Harris has the highest odds for a non-quarterback at +800.

The Patriots do have some history with winning the award as three Patriots have won Offensive Rookie of the Year. But it hasn’t happened with Bill Belichick as head coach, with Curtis Martin being the last Patriot to win in 1995.

Betting on a quarterback to win makes sense, though. Justin Herbert and Kyler Murray were the last two to win the award and five quarterbacks have won in the last 10 years.

While Jones is among the favorites to win Offensive Rookie of the Year, he’s an absolute longshot to win MVP. He’s tied for the 31st best odds to win at +10,000 on DraftKings Sportsbook, even trailing Cam Newton, who’s listed at +6,500 to win.

Jones having very low odds to win MVP makes sense, though. Outside of the fact that Jones has never played a regular-season game before, a rookie has only won the MVP once in NFL history. That was 64 years ago, when Jim Brown did it with the Browns in 1957.

The over/under for the amount of touchdowns Jones will throw is 23.5 on DraftKings Sportsbook. The Patriots threw just 12 touchdowns last season. Of course, they also used Newton as a runner toward the goal line as he ran for 12 touchdowns himself. Adding tight end Jonnu Smith could help Jones reach the over here as he caught eight touchdowns in Tennessee last season.

The over/under for Jones’s passing yards is set at 3,800.5 on DraftKings. Last season, the Patriots threw for 3,124 yards with Newton accounting for 2,657 of them.

New England’s overall passing game is a bit tricky to predict this upcoming season for several reasons. After having a down year from their receivers, the Patriots signed veterans Nelson Agholor and Kendrick Bourne along with tight ends Smith and Hunter Henry. You’d figure those adds would increase the Patriots’ passing yard total for 2021, but their ground game appears to be strong, too. Damien Harris continues to impress as he enters Year 3 and rookie running back Rhamondre Stevenson was the NFL’s top rusher in the preseason.

Jones’s over/under for interceptions is set at 13.5 on DraftKings. In college, Jones did a superb job at protecting the ball, throwing just four picks last season. He also didn’t throw an interception in the preseason.

All in all, DraftKings Sportsbook appears to project Jones to have a solid rookie season. 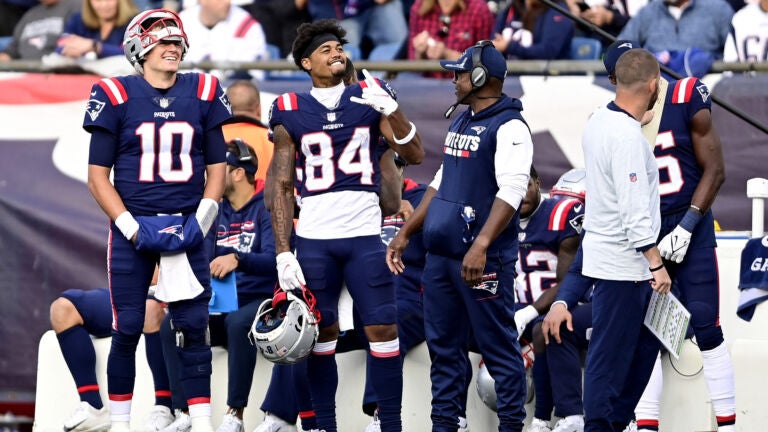