Welcome to Season 10, Episode 1 of the Unconventional Preview, a serious-yet-lighthearted, nostalgia-tinted look at the Patriots’ weekly matchup.

For the second straight year, the Patriots will start the season at Gillette Stadium against the Dolphins. Last year’s opener, a 21-11 victory that began the post-Tom Brady era, took place a day shy of a full year from this year’s kickoff. It’s stunning how much has changed in those 364 days.

The Patriots won last year behind an erratic but mostly encouraging performance from Cam Newton, who completed 15 of 19 passes while ramming his way to 75 rushing yards and two touchdowns. A year later, the 2015 Most Valuable Player is out of the league, unemployed and presumably still unvaccinated, having been beaten out in camp by thus-far-unflappable first-round pick Mac Jones.

The final touchdown in last year’s opener was a 1-yard plunge by Sony Michel, who was sent west to the Rams. Linebacker Kyle Van Noy was a menace that day for the Dolphins, collecting a sack, two tackles for a loss, a quarterback hit, and five tackles. He is now back with the Patriots, one of 15 veteran free agents added to the roster at a guaranteed cost of $163 million.

The Patriots have 24 players on the roster who were not with the team to end last year, including free agents, rookies, and 2020 opt-outs such as the essential Dont’a Hightower. Starters in the opener last year included tight end Ryan Izzo, left tackle Jermaine Eluemunor, wide receiver Damiere Byrd, and linebacker Brandon Copeland, none of whom are still with the team and none of whom should be.

The Patriots went 7-9 last year, missing the playoffs and failing to win the AFC East for the first time since 2008. The offense was rudimentary and the defense couldn’t stop the run. Because of Bill Belichick’s bold changes, which included signing the two best tight ends on the free agent market in Jonnu Smith and Hunter Henry, as well as the human bolt of lightning known as Matt Judon, some of last year’s flaws are going to be legitimate strengths this year.

The Dolphins, with second-year quarterback (and Jones’s Alabama predecessor) Tua Tagovailoa at the helm, have playoff aspirations of their own after going 10-6 in former Patriots assistant Brian Flores’s first season as coach.

Tagovailoa endured his ups and downs after taking over for veteran Ryan Fitzpatrick, but the Dolphins did go 6-3 in his starts. But he is a distant second when it comes to the most compelling former Crimson Tide quarterback in this one. It’s going to be fun to see if Jones looks as sharp and poised and — sure, I’ll say it — 2001 Brady-like in subtle ways as he did in preseason. Can’t wait to see how he fares. Can’t wait to see this game.

THREE PLAYERS I’LL BE WATCHING OTHER THAN THE QBS

Damien Harris: The Patriots’ third-round pick out of Alabama (gee, it’s almost as if Belichick has an inside connection there) is perceived as pretty close to a sure thing this season. There’s a good reason for that: He’s an agile, aggressive runner, someone who gives frequent indications that he can be the feature back on a very good team. He can do a lot on the field; now he just needs to stay on the field.

Harris has played just 12 regular-season games in his first two seasons. During his rookie season, he dealt with hand and wrist injuries in training camp, and essentially ended up in the Rookie Running Back Redshirt Program (Shane Vereen and James White are other past graduates who barely saw the field as rookies) and got just five carries all season.

Last season, when he ran for 691 yards and averaged 5.0 per carry, he provided plenty of impressive moments, including 100-yard games against the Chiefs, Ravens, and Bills. But there were too many starts and stops, not in his running style, but his availability. Harris began and ended the year on injured reserve, playing a total of 10 games.

With Michel shuffled off to the Rams and ramblin’ rookie Rhamondre Stevenson dealing with a thumb injury, it’s time for Harris to carry the load. It’s telling that this is his third season in the league and it’s the first time he’ll be active against the Dolphins, a team the Patriots play twice per season.

Matthew Judon: The versatile linebacker might have been a relative unknown when he entered the NFL as a fifth-round pick of the Ravens out of Grand Valley State in 2016. Five years later, he’s no longer an unknown, collecting 34.5 sacks and making a pair of Pro Bowls with Baltimore before joining the Patriots on a four-year, $56 million contract in March. But he still has felt like something of a revelation during his first few months with the Patriots.

Judon was constantly at the forefront of a Patriots defensive swarm during preseason games, and he and second-year linebacker Josh Uche had a Willie McGinest-Chris Slade thing going on while tormenting opposing quarterbacks.

The Patriots were tied with the Lions for 26th in the NFL in sacks last season (24). With the Dolphins having issues at left tackle, Judon and friends should make some headway on blowing past that number sometime around midseason.

Jaylen Waddle: Belichick hasn’t cornered the market on Alabama alums, of course; an astounding 70 players from Saban University were on NFL rosters as of Wednesday.

Waddle, drafted sixth overall (four spots ahead of Crimson Tide teammate and Heisman Trophy winner DeVonta Smith) has a chance to make an immediate impact, with star Patriots cornerback Stephon Gilmore on the physically unable to perform list and Jalen Mills dealing with an ankle injury.

Waddle is listed as one of three starting Dolphins receivers, along with DeVante Parker and Jakeem Grant.

September usually brings us the best weather of the year. It also gives us a chance to celebrate the most joyous song ever recorded: “September,’ by Earth, Wind and Fire. (What, you expected “Wake Me Up When September Ends”?)

No, this is a great month, maybe the greatest month, and we haven’t even mentioned that it’s also the month that kindly returns football to our lives. Grievance? My grievance is that you think we’d have a grievance at this most wonderful time of the year.

OK, fine: I am kind of annoyed that the Patriots don’t have a backup quarterback better than Brian Hoyer.

When Tom Brady (perhaps you are familiar with his work?) took over for an injured Drew Bledsoe in the second week of the 2001 season, it was apparent immediately that he did some things better than the rocket-armed incumbent.

The offense, lethargic and disjointed under Bledsoe in an uninspiring opening loss to the Bengals, immediately played with more energy and tempo under Brady. The kid’s footwork was superior. He threw a better screen pass.

No one knew then that he’d become a fraction of what he became, but it was clear he had something.

But it’s easy to forget, with the magical ending of that season (I still say the 2001 Patriots are the most improbable Super Bowl champion of all time) and the extraordinary career overall, that there were early hiccups.

The most notable one, the one that made Bledsoe’s most ardent backers believe his job was not going to be threatened, came in Brady’s second start in Week 4, against the Dolphins. Brady threw for just 86 yards, got sacked four times, and lost two fumbles to Jason Taylor, one for a touchdown.

This is not to suggest that Jones will stumble into similar struggles in his first professional start against the same franchise 20 years later. Sure, the Dolphins do feature a quality defensive backfield that includes All-Pro Xavien Howard (10 interceptions in 2020) and former Patriot Jason McCourty, who is starting at safety. But Jones is set up to succeed, with a sturdy line in front of him, plenty of well-rounded skill talent surrounding him, and a roster perfectly capable of winning by running the ball and playing stout defense.

I suspect we’re going to come away impressed. It’s telling that his veteran teammates, many of whom have accomplished exceptional things, already are. But it’s worth remembering too that no matter how he plays Sunday, it’s the first paragraph of his story, not the whole story, and the epilogue is many years from being written. Heck, Brady hasn’t even written his yet.

PREDICTION, OR DAN MARINO WOULD THROW FOR 6,000 YARDS A SEASON NOWADAYS

Since 1993, when Drew Bledsoe arrived as the No. 1 pick in the draft, five quarterbacks have made their first NFL start for the Patriots. Check out how they fared:

Tom Brady, Week 4, 2001: This was the Dolphins loss mentioned in the Matchup segment. He threw for 86 yards and no touchdowns.

There are a couple of fairly obvious conclusions we can draw from that. It’s tough to put up big numbers in the chaos and nerves of a first NFL start. Also: The bar isn’t that high for Jones to surpass all of their starting debuts. Garoppolo’s performance was the best, with those 264 yards in a somewhat surprising win, and he still made young QB mistakes, including a pair of fumbles.

The Patriots are equipped to run the ball, with a talented offensive line and a diverse backfield led by Harris. But Belichick and Josh McDaniels trust Jones, and they’re going to want to take their new toys like Jonnu Smith out for a test drive.

Jones is going to have more opportunities to make plays in the air than the consensus seems to think. He will make them. This is what a complete team looks like. Patriots 24, Dolphins 13. 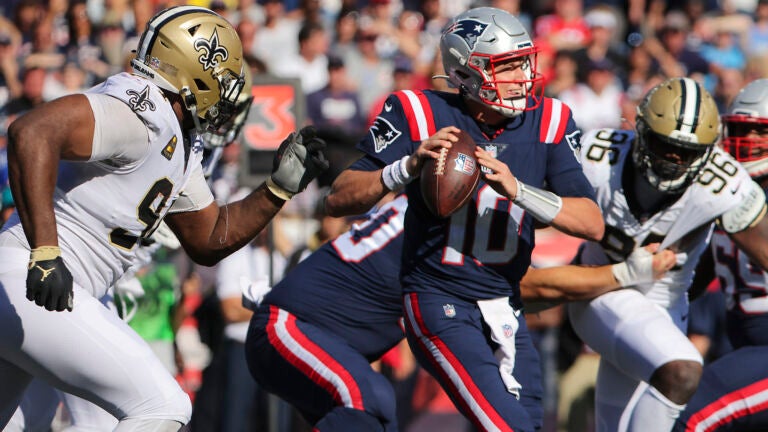