Let’s keep it simple: the New England Patriots should have beaten the Miami Dolphins Sunday afternoon. But they didn’t.

Two poor defensive possessions and missed opportunities on offense, especially on the team’s last two drives, stole chances for the Patriots to seize control of the game with the Dolphins at their mercy.

The result: an ugly 17-16 loss that had Bill Belichick lamenting the team’s ball security and execution after the game.

As sore as this loss will feel in the morning, though, the Patriots can say this: they have a real quarterback in Mac Jones, and both Jones and the team’s defense will keep them in a lot of games this year.

Here are a few takeaways from the action.

Especially after seeing how badly the Jaguars’ Trevor Lawrence and Jets’ Zach Wilson played, it’s hard to ask for a better debut than what Mac Jones put out there for the Patriots Sunday.

Well, aside from that first pass attempt where he threw the ball backward for a sack, anyway.

All jokes aside, Jones did everything the Patriots needed him to do in this one, and he played more than well enough to guide the offense to a win on his own account.

His numbers – 29-of-39 passing for 281 yards and a touchdown – actually might not have been as impressive as the eye test said he played.

For one thing, he proved unflappable in the face of heavy pressure from the Dolphins, at one point having completed 66 percent of his throws while being pressured.

The first-round passer took shot after shot from Miami defenders, including on his touchdown pass to Nelson Agholor, but seemingly delivered the ball on target no matter what happened.

He had several “wow” throws, like a deep sideline completion to Agholor while (again) getting smoked, and a simply perfect touch throw on a wheel route to James White.

More importantly, he helped the Patriots convert on 11 of their 16 first downs (compared with 4-of-11 on third down for Miami), extending drives with clutch throws on multiple occasions.

It wasn’t perfect. But for what they asked Jones to do, it’s about as good as you could ask for. There should be no doubt at this point the Patriots made the right decision to ride with the rookie this year.

Sloppiness cost the Patriots the game.

Unfortunately, New England’s offense as a whole couldn’t do enough to seize a game that was theirs for the taking, despite multiple opportunities to do so.

A holding penalty on Isaiah Wynn during the offense’s third drive wiped out a big run from Harris that would’ve put the Patriots on Miami’s 1-yard line. The Patriots had to settle for a Nick Folk field goal instead of a touchdown there.

Jakobi Meyers dropped a throw in the flat on 3rd-and-short on the penultimate possession that, while not a perfect pass from Jones, was catchable and would’ve given him a chance to turn up the field to get the first down. Had they extended that drive, they might’ve gotten a touchdown out of it that could’ve put bigger pressure on the Dolphins. Instead, they settled for another field goal.

Then, after Jonathan Jones swiped Tua Tagovailoa’s ill-fated throw, Harris coughed up the ball inside the 10-yard line with the Patriots looking all but assured to take the lead.

On top of that, the team committed eight penalties for 84 yards, far outstripping Miami’s five flags for 28 yards.

Jones took a beating, partly because he held the ball too long and partly because his protection struggled at times with starting right tackle Trent Brown out of the game early with a calf injury.

And despite the rookie quarterback’s promising play, the team only mustered 16 points, twice having 14-play drives that didn’t end in touchdowns.

You won’t win kicking field goals in the NFL. You need touchdowns. The Patriots didn’t execute well enough as a unit to score more than one touchdown on the day, and it cost them.

The defense bent but ultimately did its job.

Aside from two drives, the Patriots defense deserves a significant amount of praise for its performance against Miami.

The bad: the Dolphins made things look incredibly easy on their two touchdown drives of the day to start either half, moving New England’s defensive line around effortlessly and keeping the secondary off-balanced with quick throws that forced them to tackle after the catch.

Jaylen Waddle and DeVante Parker got multiple chunk plays off of quick slants or crossers, taking advantage of the Patriots playing in off-coverage, and both had big jump-ball completions that helped the Dolphins get points.

But Matthew Judon, Kyle Van Noy and the rest of the defensive unit didn’t back down.

Van Noy terrorized his old team, picking up a sack, multiple pressures, and a pass defended. He hinted he’d have something extra for the Dolphins, who let him walk in free agency this offseason, and he didn’t disappoint.

Judon looks like the Patriots’ best player period right now, generally destroying the Dolphins protection wherever he lined up and walloping Tagovailoa on Jonathan Jones’s interception.

Josh Uche also got into the action with a sack coming off the bench, showing his explosive play during the preseason was no fluke.

The secondary largely did its part, too, despite surrendering a few big plays. J.C. Jackson had a few big pass-breakups on DeVante Parker when the receiver started to get hot and looks up to the task as the team’s No. 1 cornerback with Stephon Gilmore out. Jalen Mills also had a key pass-breakup in the end zone on Albert Wilson right before Uche’s sack forced Miami out of field goal range.

If there’s one thing you can say about this Patriots defense, it’s this: they’re not going to roll over for anyone. Like Jones, the unit did enough to keep the team in the game.

–When Brown left the game in the first half and didn’t return, Justin Herron initially took his place at right tackle. Herron struggled mightily, drawing a holding penalty that negated a big completion from Jones to Kendrick Bourne and getting absolutely worked by Emmanuel Ogbah on play where the defensive end batted down a Jones pass at the line of scrimmage.

Before you knew it, newly acquired offensive lineman Yasir Durant, who came to New England from Kansas City via trade, was in at right tackle for Herron.

The Patriots have to hope Brown can come back soon for Jones’s sake.

–Before that fumble, Harris had been one of the offense’s best players on the day, racking up 22 carries for 98 yards up to that point. He ripped off two explosive runs, including a 35-yarder on the first play of the game, repeatedly made strong cuts to find slivers of space and storming through contact to pick up first downs.

Mistake aside, he played like a guy ready to break out in his first full season as a starter.

On the other hand, Rhamondre Stevenson barely played after his fumble on his short catch-and-run early in the contest. Those are the kinds of mistakes you can’t have as a rookie. It will be worth monitoring if Stevenson remains on the active roster next week or if J.J. Taylor gets a chance to dress in Week 2 instead.

–Nelson Agholor didn’t have an eye-opening training camp and struggled to consistently catch the football often.

That wasn’t the case Sunday afternoon.

The speedy receiver was open often and caught five of his seven targets (no drops) for 72 yards and the Patriots’ lone touchdown. He also showed he can be a mismatch in tight spaces as well as down the field, hauling in two highly contested grabs and running a shifty “return” route on the goal line for his touchdown.

That’s the kind of impact the Patriots paid him for in free agency.

What’s more, his ability to threaten defenses down the field will continue to up throwing lanes for the likes of Jonnu Smith, Hunter Henry and Jakobi Meyers.

Meyers has been the most consistent receiver New England has at this point, but Agholor has the potential to be the best pass-catcher on the team if he routinely plays like this. 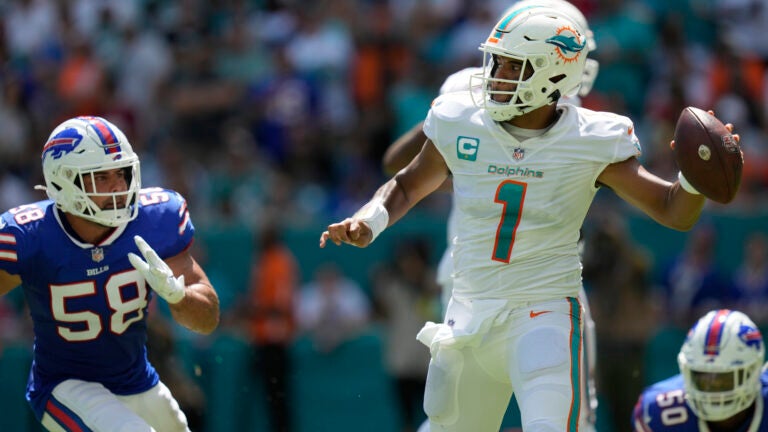