There were moments on a beautiful, bright, late-summer Sunday when the upgrades were evident and the promise of these new Patriots felt palpable.

One came with the 35-yard, tone-setting scamper from Damian Harris on the first snap from scrimmage. Another arrived via the throw Mac Jones made to James White on a third-down wheel route, a perfect pass floated so precisely, so softly, that when it landed in the captain’s hands he not only seemed to be catching the ball but cradling reassurance from the rookie quarterback on behalf of the region. Then there was the interception-inducing lick Matt Judon laid on Tua Tagovailoa, as well as what totaled to 14 catches (plus a touchdown) from the four targets who joined the linebacker this spring as part of the Pats’ free-agent frenzy.

That spending spree was bent on improving the level of talent in Foxborough, and even after just one game there’s no question these Patriots are better than those players they were brought in to replace. Yet, that one game still extended a skid that’s now seen the Pats drop four of five dating to last December, so a 17-16 defeat to the Dolphins does raise one big question about this bunch — and the success of this season might just hinge on the answer.

How long will it take these Patriots to learn how to win?

For two decades, the Patriots and winning have been synonymous. Much of it has been credited to the coach and the quarterback, but also to the culture that has been established and entrenched in the course of achieving so much success. The so-called Patriot Way is probably a bit overrated, and it’s been overused as a vague, trite catch-all for those trying to explain a logic-defying dynasty, but the concept is not entirely without merit. Under Bill Belichick, especially with Tom Brady behind center, one of the Patriots’ most decisive advantages seemed to be their enduring understanding of exactly what it took to win games in the NFL.

So while the coach classified it as merely “disappointing,” Sunday’s setback could be closer to a cause for more amplified alarm if it proves a harbinger of things to come. New England gained 134 more yards from scrimmage than Miami. It held the ball for nearly 13 more minutes. It converted seven more third downs. Offensively, it didn’t allow a sack after the first series, and never went three-and-out. Defensively, the Pats allowed the Dolphins to eclipse neither 200 passing yards nor 100 rushing yards.

Yet for all of that statistical domination, the Patriots held the lead for just 2 minutes and 30 seconds of play. They trailed for the final 26 minutes, and were never able to overcome a Dolphins advantage that never got beyond seven points.

The most obvious reasons were painfully apparent. Harris’s fumble inside his own 10-yard line, with the go-ahead field goal looking like a worst-case scenario late in the fourth quarter, was a killer. So were at least a couple of the eight penalties that officially cost the Patriots 84 yards, not including 13 that would’ve brought them within inches of the end zone had they not been swiped a second-quarter holding call.

But just as dooming as four fumbles and far too many flags were the less-egregious but almost equally damaging letdowns that ultimately became some of the game’s critical junctures. The Patriots’ offense had three separate 14-play series, each of which covered at least 57 yards and swallowed at least five and a half minutes of clock. They got a grand total of nine points from those 42 snaps and 20:34 of possession time. Only once in four trips to the red zone did New England score a touchdown. In Patriots parlance, they bent Brian Flores’s defense, but failed to break it.

On the flip side, the Dolphins converted on both of their trips inside the Patriots’ 20. Miami netted just 95 yards of offense on the seven drives where it didn’t score a touchdown, and went just 4-for-11 on third down, but the two chances it had to strike, it struck. Same before the half, when the Dolphins took over with 2:30 on the clock then picked up 45 yards to produce a field goal.
And same after Harris’s fumble, when a Dolphin penalty positioned the Fish with 1st and 14 from their own 5. The Patriots had three timeouts and 3:31 left in regulation. If their defense could’ve forced a punt, the Pats were a decent return and a Nick Folk kick from making their lead back’s turnover more of a dodged bullet than a direct comparable to Cam Newton’s crippling giveaway last season in Buffalo.

But that’s the difference. Winning teams make the plays needed to win. Losing teams — as the Pats and Newton learned last year — don’t.

Watching a winning team for nearly 20 years, Patriots fans have been accustomed to the opposition committing ill-timed, inexcusable turnovers and deflating, drive-destroying penalties — and seeing their team feast on foes who failed at the game’s most obvious inflection points. They’ve listened as the losers lamented the opportunities lost on the way out of Gillette Stadium, frustrated by coming up short despite feeling like they were probably the better team, or that they had a legitimate shot to win, or that they gave away a game that was ripe for the taking.

Sunday it was the opposite. Sunday the script was flipped, almost entirely reversed, and it was the Patriots themselves who walked off the field feeling that remorse. Given that Miami is a divisional rival with playoff aspirations it’s a regret that could sting them for months to come — but that would be assuming Sunday was merely a misstep on the climb back to contention, and not a warning sign that this is a Patriots team with a long way to grow.

The talent is there. These new guys can play. A new era is now underway.
But that also means the old era is over. A chunk of the Patriots’ aura trucked down to Tampa Bay with Tom Brady. Fewer than half of Sunday’s starters were around for a Super Bowl LIII title that’s still not yet three years old. Then New England went out and lost a game the exact way they’ve been winning them for so many yesteryears.

How quickly this talent can live up to its promise could depend on how soon they learn to not let that happen again. 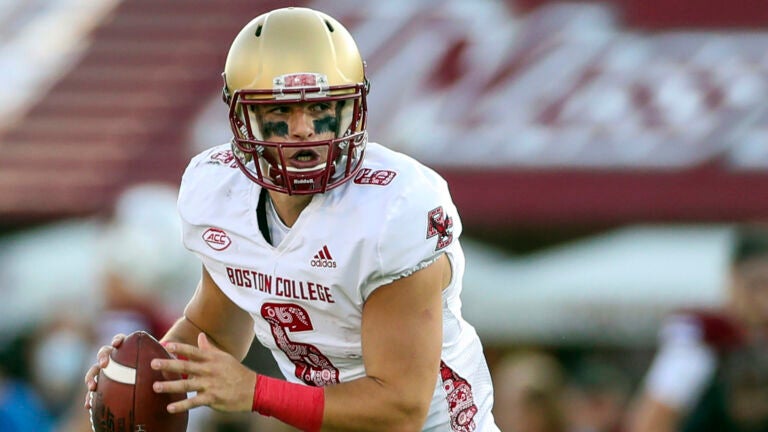