Josh McDaniels knows what the Patriots offense is supposed to look like. None better: he designed the thing.

When New England opted to go with rookie first-round pick Mac Jones over Cam Newton as the team’s starting quarterback, many experts perceived the Patriots did so because Jones ran McDaniels’s offense the way he wanted to see it run — something confirmed by both McDaniels and Belichick after the move was made.

That said, going with a rookie quarterback instead of an established veteran was always going to come with some teachable moments. Though Jones, by all accounts, appeared to fare well in his first NFL action, his offensive coordinator said Tuesday afternoon there’s still plenty of learning ahead for the rookie.

“Look, there’s no young player who has ever played in their first NFL game that didn’t come out of the game and say, ‘OK, wow, there’s a lot of things I can learn moving forward that I hadn’t experienced before,’” McDaniels said when asked about Jones’s performance on Sunday.

The Patriots’ offensive coordinator and quarterbacks coach noted there were plenty of positives on the day for Jones, who completed 74 percent of his passes (29-of-39) for 281 yards and a touchdown.

“But at the same time, I think he knows there were a few decisions that he made and a couple reads and a few throws [that he would like back]…I think there’s also some things that now he’s seen them and he’s seen some things different in the game, certainly the speed of the game in the regular season is different than the preseason. He’ll adapt to that. And he’ll continue to improve his communication, his ability to see things quickly and the decisions he makes will hopefully improve along the way as well.”

Jones certainly didn’t have an easy time during his debut, facing blitzes from an aggressive Dolphins defense on almost half his dropbacks.

The No. 15 overall pick of this year’s draft responded well, though, hitting on 14-of-18 for 124 yards against blitzes and 7-of-10 for 71 yards when otherwise pressured.

McDaniels said the Dolphins challenged the Patriots with myriad blitz looks and pressure packages but that Jones handled “most of that” very well.

In particular, the coach made sure to point Jones’s improvement in an area the quarterback has frequently talked about as an area of focus: being vocal on the football field.

“His communication I thought was clear,” McDaniels said. “It was consistent. He was loud. I always tell rookies or young players, if you’re not 100 percent sure, it’s not OK to be quiet. I’d rather them be loud and wrong than silent. Then nobody knows what’s going on. He’s always done a good job in that regard and I would expect he continues to do so. Look, it’s no secret that our quarterback does a significant amount of communicating, along with our center and the rest of our skill players. That’s part of his job. He’s embraced that since he’s got here. I thought he tried to handle that as well as he could on Sunday.”

As far as Jones’s command of the Patriots’ offense, McDaniels admitted there’s “room to grow” for Jones and that there are “certain things he’s not ready to do” at the line of scrimmage as far as taking advantage of all the quarterback-friendly features the system provides.

But he said the rookie’s perfectionist nature and desire to be as prepared as possible for each practice and game will keep him moving in the right direction.

“He wants to win at everything that he’s doing,” McDaniels said of his rookie quarterback. “He wants to perform his best every single day on every single rep. I think that’s a great trait and a great quality to have, not only as a football player but as a human being.

“I think that’s obviously the No. 1 way to lead – you show everybody else that you’re going to hold yourself to a very high standard, and then you’re going to try to bring others along if you see the opportunity to do so. …I’m excited that he certainly wasn’t happy with the outcome the other day and is looking forward to preparing hard for the Jets.” 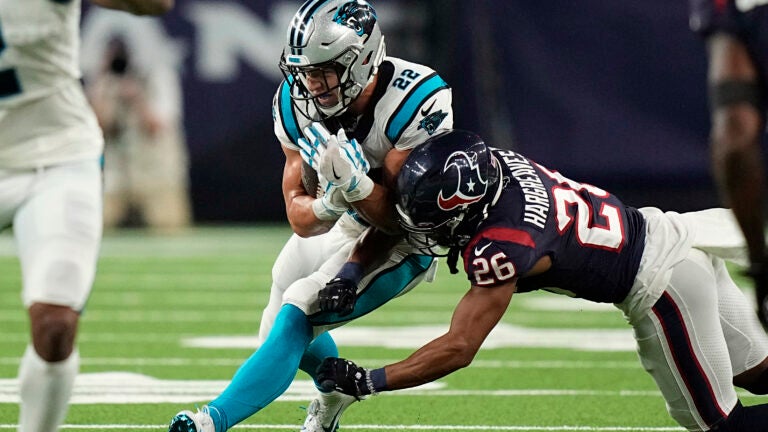