Well, he could have won, but still…

Patriots quarterback Mac Jones couldn’t have done any better in his first start in the NFL last Sunday.

Don’t let that matter interrupt from the overwhelming fawning that has been at the feet of the rookie this week after completing 29 of his 39 pass attempts against the Miami Dolphins. Jones amassed 281 yards and a touchdown for a passer rating of 102.6. Not bad for a newbie.

But the way some Patriots media and fans have reacted, you might have assumed we’ve already named a bridge after the kid. At the very least, he must have shoved Charli out of the way to get his own drink at the local donut shop. Can we just hand him the Rookie of the Year now? What’s the wait?

Jones gave reason to be excited Sunday, based on the way he read the Miami defense, his seeming calm under pressure, and his ability to out-wink the opponent. All things considered, it was a great start to what everybody hopes will be an illustrious career.

But he still lost. The Patriots’ offense still ran out of gas and looked much like the sputtering unit we have been used to seeing over the last year and a half. The running game, which figures to be the team’s strength, suddenly looked overmatched with a so-so Damien Harris (who only ran for 65 yards on 22 carries after his 35-yard gallop to start the game) fumbling the game away, and Rhamondre Stevenson winding up in the doghouse after his own miscue. And you thought it might be a few weeks until you really missed Sony Michel.

Mac Jones can’t cure all the wills that exist on this team, but, at least in Week One, he did at least put a cloak over the fact that the Patriots choked one away, leaving them desperate for a win against the Jets. Otherwise, it won’t matter how he looks the rest of the year.

An 0-2 start losing to the Dolphins and the Jets would be a disaster.

But isn’t this the very reason we have the Jets in the first place?

Emmanuel Morgan, New York Times: Patriots (-5.5). “Patriots running back Damien Harris’s fourth-quarter fumble in the red zone ended a final drive by the rookie quarterback Mac Jones, and New England (0-1) fell to Miami, 17-16, last week. The score should not be so close against the Jets (0-1), who allowed six sacks of their rookie quarterback, Zach Wilson, last week. Blocking for Wilson becomes harder this week without left tackle Mekhi Becton, who is recovering from a dislocated kneecap. One first-year passer will start his career 0-2, and even if the Jets adjust their protection, it will probably be Wilson.”

Joe Giglio, NJ.com: Patriots. “Bill Belichick off a loss and vs. a rookie quarterback? Where do I sign up?”

Globe Staff: Everybody likes the Patriots (-5.5)

Pete Prisco, CBS Sports: Patriots 24, Jets 16. “The Patriots lost to Miami at home last week, but fumbled late to blow a real chance to win it. The Jets stumbled around for three quarters in losing to the Panthers. This is a game of two rookie quarterbacks in Mac Jones and Zach Wilson. The Patriots have the better defense, so look for them to make it tough on Wilson. New England, which has won five straight on the road against the Jets, will get its first victory of the season.”

Will Brinson, CBS Sports: Patriots 24, Jets 14. “Zach Wilson will be good in the NFL barring a total organizational collapse around him, which, weeeeeeell, let’s just hope it doesn’t happen. This ain’t it though. Bill Belichick just got beat by Brian Flores and will have a rookie quarterback behind a bad offensive line he can pressure aggressively. Watch “The Belestrator” and you can see Belichick’s respect for the young QB. But this is a mismatch. Plus, the great Tom Curran of NBC Sports Boston promised to shave an eyebrow and wear Hawaiian shirts for a few weeks if the Pats didn’t roll. Sort of turns betting on the Pats to blowout the Jets into a win-win.”

Frank Schwab, Yahoo! Sports: Patriots (-6). “When this line came out, it was Patriots -3.5. A lot of value has been extracted since then, but do you believe in the Jets keeping it close? Bill Belichick is 21-6 against rookie quarterbacks, and that won’t be the last time you hear that stat this week.”

SB Nation staff: Pats across the board.

Jimmy Kempski, Philly Voice: Patriots. “I don’t want to make too much of what I saw over two days in joint practices this summer when the Patri*ts visited Philly, but they did not look good… at all… and I’m mad at myself for picking them Week 1, knowing that they’re not good. I’d love to pick against them this week, but unfortunately, the Jets looked even worse during joint practices with the Eagles than the Patri*ts did.”

Vinnie Iyer, Sporting News: Patriots 24, Jets 13. “The Patriots have a great history against rookie quarterbacks with Bill Belichick and the Panthers will have provided plenty of good game film on how to frustrate a promising but green Zach Wilson. Look for New England to not worry much about the run and focus on taking away Wilson’s clear top target, Corey Davis, even without Stephon Gilmore. Rookie counterpart Mac Jones has more support with his offensive line, running game and versatile supporting skill personnel to move the ball in methodical, mistake-free fashion.”

Bill Bender, Sporting News: Patriots 20, Jets 17. “It’s a battle of rookie quarterbacks in Mac Jones and Zach Wilson, and it comes down to which quarterback can be more efficient. Wilson completed 54.1 percent of his passes and took sacks in Week 1. Jones completed 74.4 percent and took one sack. The Patriots win a tight one.”

Michael David Smith, Pro Football Talk: Patriots 31, Jets 20. “Mac Jones vs. Zach Wilson may be a close call, but the Patriots vs. the Jets is an easy one.”

Gregg Rosenthal, NFL.com: Patriots 28, Jets 21. “I’d give the Jets a better chance if I trusted their running game. The Patriots’ run defense (and defense overall) didn’t look any better in Week 1 than a year ago, despite New England giving up just 17 points to the Dolphins. Even so, this should be a game where Bill Belichick can confuse Zach Wilson into making an over-eager mistake or two. Mac Jones may have less arm strength and speed than Wilson, but he’s in a better position to succeed. The Jets’ offensive line and secondary are weaknesses the Patriots should be able to attack.”

It says here: Patriots 31, Jets 17. Death, taxes, and Bill Belichick beating a rookie quarterback on a bad team in Week 2. 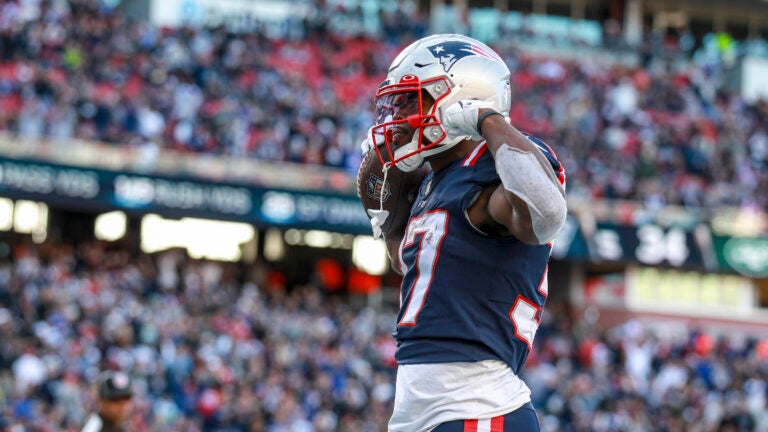