The least the NFL could have done was to give us a juicier appetizer.

Heck, a divisional game against the Buffalo Bills might have done just fine. Certainly a team that’s a little sexier than the New Orleans Saints — such as the Dallas Cowboys or the Cleveland Browns — getting pushed up the home schedule might have generated more interest with Football Armageddon on the horizon only one week later.

Instead, the Saints are coming to town and nobody cares.

It’s impossible not to realize the level of challenge that awaits the Patriots, trying to improve to 2-1 before welcoming old friends into Foxborough. Fans and media have already started looking ahead. It’s hard to imagine that some players and Patriots personnel haven’t as well.

Of course, that flies in the face of everything Bill Belichick preaches from his Big Book of Pigskin Cliches. Ignore the noise. One game at a time. Focus on the task at hand.

But this week, what with Tom Sr., the shady trainer, and veiled Instagram posts already fueling the fire, the roadblock that is the Saints has become a nuisance rather than a showdown. Never mind the fact that New Orleans, so dominant against Green Bay and worthless against Carolina, comes into the game impossible to define. Maybe Alvin Kamara runs all over a New England run defense that couldn’t bottle up the pathetic Jets. Maybe Jameis Winston vomits all over himself. Or not. Who knows?

A Patriots loss is going to take just a shade of wind out of next week’s sails. Which makes this a really important game.

That nobody cares about.

Jim Derry, NOLA.com: Saints (+3). “I am not sold on the Patriots. They lost to a mediocre (at best) Dolphins team and whooped up on possibly the worst team in the NFL. Bill Belichick has a history of annihilating rookie quarterbacks, and he did so to Zach Wilson and the Jets last week. This Sunday, he gets a veteran with a chip on his shoulder.”

Globe staff: Five out of six (Tara Sullivan) like the Patriots (-3).

Emmanuel Morgan, New York Times: Patriots (-3). “Who dat? Saints fans must be asking themselves that question after a shellacking last week at Carolina, where running back Alvin Kamara was limited to only 32 all-purpose yards and Jameis Winston threw two interceptions. The Patriots’ defense is more experienced than Carolina’s, and could find similar success against a Saints (1-1) team trying to find its new identity in the post-Drew Brees era. The Patriots and Coach Bill Belichick may have fans asking more questions afterward.

Pete Prisco, CBS Sports: Patriots 23, Saints 16. “The Saints looked bad in losing at Carolina and technically are playing a third road game in a row since they played their first home game in Jacksonville. They looked flat in losing to the Panthers last week, and now face a tough challenge on the road against the Patriots. New England’s defense is playing well and will again here against Jameis Winston to get the victory.”

Will Brinson, CBS Sports: Patriots 21, Saints 17. “Are the Saints the hardest team to figure out in the NFL? One week after blowtorching the Packers, the Saints could barely move the ball against the Panthers. Carolina threw a bunch of different-looking defenses at Jameis Winston and brought pressure from all different places. The loss of Erik McCoy appeared critical even as the tackles mostly held their own. The real Saints offense is somewhere in between, but Bill Belichick won’t offer much of a reprieve. I like the under here a lot too, but at 41.5 it’s tough to take, just because a single jailbreak or defensive score could flip this. If the Saints have a clean injury report on defense, I might be willing to bite.”

Frank Schwab: Yahoo! Sports: Patriots (-2.5). “The Saints take over as the hardest team in the NFL to figure out. They had one A+ performance and an F performance. What comes next? I do trust Bill Belichick to see what bothered Jameis Winston last week and incorporate it, while adding his own confusing twists.”

Michael Hurley, CBS Boston: Patriots (-3). “I was covering the Patriots game, so I was only following the Saints’ game on the box score. It looked like they were getting shellacked. But then I watched the game, and outside of some horrific offensive line play, they really played decently. Considering they were playing without eight coaches, perhaps a disjointed showing should have been expected. The Patriots have offensive line issues of their own. Maybe Trent Brown alleviates that, but maybe his calf goes haywire again on Sunday. As boring as it may be, the winner may just be the team with the offensive line that holds up. I don’t feel great about either one, but considering the Saints are merely days away from somewhat returning to normalcy in New Orleans, and considering Jameis Winston will be helming that shaky O-line in a road environment, perhaps this doesn’t turn out to be their finest showing.”

Jimmy Kempski, Philly Voice: Patriots (-2.5). “The Patri*ts intercept a lot of passes, and Jameis Winston throws a lot of interceptions.”

Vinnie Iyer, Sporting News: Patriots 17, Saints 13. “The Patriots are proving they are a force running the ball behind a stout line and their two most reliable backs, Damien Harris and James White. Mac Jones has been set up to be comfortable with low-risk, high-efficiency passing with the focus on ball protection. The Saints are trying to treat Jameis Winston the same way and win around him with the running of Alvin Kamara leading the way. New England’s game plan will be to zone in on Kamara and take their chances with the Saints’ otherwise limited skill players.”

Bill Bender, Sporting News: Saints 20, Patriots 19. “The Saints have been the early-season box of chocolates with Jameis Winston, and the Patriots have allowed just 11.5 points per game with five interceptions. This used to be a blockbuster matchup with Drew Brees and Tom Brady. Now, it comes down to which team commits fewer turnovers.”

Michael David Smith, Pro Football Talk: Patriots 14, Saints 13. “Are we going to see the Week One Jameis Winston or the Week Two Jameis Winston? I think Bill Belichick will have a good game plan for him.”

It says here: Patriots 24, Saints 22. You ask, “Why can’t we play Zach Wilson every week,” and I give you Jameis Winston. 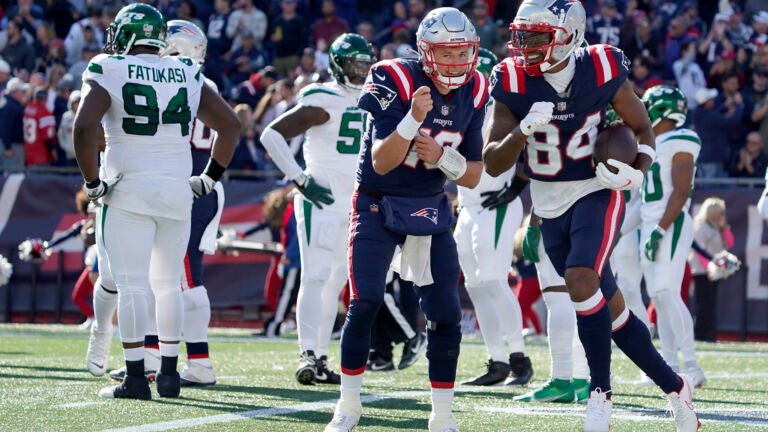