Ahead of Tom Brady’s anticipated return to Gillette Stadium, the formerly guarded quarterback sat down for a wide-ranging interview with the Wall Street Journal Magazine.

In the interview, sports columnist Jason Gay illustrates a “new Tom:” a Brady who is shedding his Patriots-era persona to become a more chill and laid-back Florida man.

But with a new “fun Tom” comes some new fun facts. Here were three things we learned about Tampa Tom.

Gisele said Brady likes clothes more than she does

“He loves clothes way more than I do,” Brady’s supermodel wife Gisele Bündchen told the WSJ. Magazine. “He has great taste and understands and really cares about what people want, what can help them feel good. That’s what fashion is about.”

Brady is working on a new activewear clothing line for training, which is set to launch in December, according to the WSJ. Magazine.

But the photos speak for themselves: Brady is pictured in the story wearing $1,300 hoodies from designers like Balenciaga and Givenchy, paired with $1,100 Mr. Porter pants.

When describing the “New Tom,” the WSJ. Magazine wrote one reason for his more chill persona could just be age.

“Brady is comfortably into his 40s,” Gay wrote. “It’s the constitutional right of everyone older than 40 to give a little less of a damn about what the rest of the world thinks.”

“When you’re going to be 44, you feel liberated to say, ‘All right…I feel differently,’” Brady said.

The article added that Brady mentioned reading about younger people’s obsessions with what others think, only to discover no one was ever paying attention by the time people reach their 50s and 60s. Gay even noted Brady’s social media is filled with “dad-humor.”

“You think people care what you think,” Brady said. “And then you care less what people think, and then you realize no one cared, anyway.”

Brady reportedly told himself he’d never own a boat. But that’s easier to say in chilly New England than it is in sunny Tampa.

“I literally said, ‘I’ll never own a boat in my life. Never. Who likes boats?'” Brady explained.

The answer to that question: Tom Brady after a year in Tampa.

“Brady’s gotten into boats, and not just any boats — he’s due to take delivery of a 77-foot Wajer, list price said to be $6 million,” Gay wrote.

Brady told Gay his change of heart towards boats came when he realized it was a way to spend more time with his family.

“They’re captive,” Brady said. “I almost want to put my kids on the boat like, ‘You’re hanging with us — that’s how it’s going to go.'” 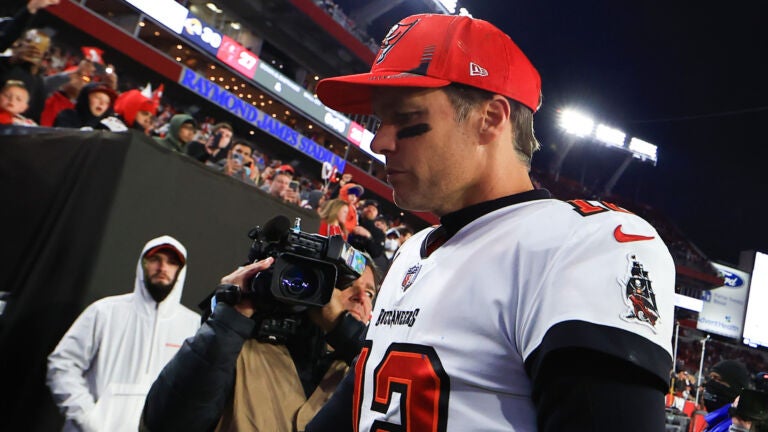