Tom Brady isn’t the only quarterback playing this Sunday.

Patriots rookie Mac Jones just wrapped up his first month as an NFL starting quarterback. On paper, the results don’t look too great. He’s thrown for 737 yards with two touchdowns and three interceptions while going 1-2 over his first three starts.

But former NFL quarterback Drew Brees has liked what he’s seen so far from the rookie. The quarterback-turned-NBC analyst watched last week’s game closely, in which Jones threw three interceptions in a 28-13 loss to Brees’s former team, the New Orleans Saints.

What stood out to Brees in that game was how Jones did against the pressure the Saints brought throughout the game.

“I’ve been really impressed with him,” Brees said on a conference call this week, via WEEI.com. “I’ll take this last game specifically because I had a chance to watch it pretty closely. I felt like the Saints’ defense, especially the defensive line, really got after New England up front, both with the four-man rush and with their pressure packages. But I felt like Mac Jones showed a level of poise and maturity that is beyond his years. Man, he stood in there. He took a lot of hits. He stood in there with confidence to deliver the ball down the field.”

Brees shared some disappointment in the Patriots’ receivers, saying: “It was unfortunate, because I didn’t think many guys were getting separation for him.” Of course, one notable miscue from a Patriots receiver against the Saints came when tight end Jonnu Smith dropped a pass from Jones with the ball landing in the hands of Saints defensive back Malcolm Jenkins, who returned it for a touchdown.

Brees continued to rave about Jones’s ability to play against the pressure. Against the Saints, Jones was sacked twice and hit 11 times. After scoring just three points in the first half, Jones did bounce back a bit to help the Patriots move the ball into Saints territory in three of their final four drives, leading Brees to say Jones has a “pretty good command of that offense.”

“He doesn’t look like he’s ever rattled,” Brees said of Jones. “He looks like he is in a position where he’s playing with confidence. I think he’s only going to get better as the season goes along and he continues to develop a rapport with the skill position players and obviously as they continue to come together as a team. I’ve been really impressed with what I’ve seen from him thus far.”

One of the common criticisms Jones has faced in his young career is that he hasn’t thrown the ball down the field that much. “Sunday Night Football” commentator Cris Collinsworth likes Jones’s fit in the Patriots offense, though.

“I think for all of us that have watched Brady play the game with New England and Josh McDaniels’ offense for all those years, it’s amazing how much — and I’m not comparing him to Tom Brady so don’t get me in trouble with something that only I can say — but it feels like their offense again,” Collinsworth said.

“Okay, they did a certain thing with Cam and they did different things, but now you sort of feel that offense coming back. I think it’s going to be really interesting to watch, not just how he grows, but how that offense grows with all those new parts in there now with all the free agents and all the different guys and how long it takes to start to really feel that way again or if it ever does. We’ll find out. This will be a good place to start.” 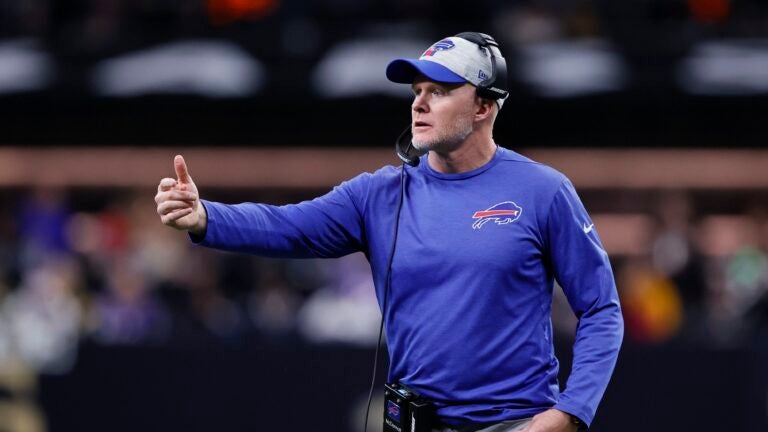