NBC’s ratings for Sunday night’s Patriots-Bucs thriller were predictably massive. But unlike Tom Brady, they did not set any records.

Per NBC and Nielsen Media Research, the Buccaneers’ 19-17 victory over the Patriots – during which Brady, returning to Foxborough for the first time as an opponent, set the NFL’s career passing yardage record —  averaged 28.5 million viewers, including streaming.

That puts it second behind only a Dallas-Washington game from Dec. 30, 2012 (30.3 million) among the most-watched “Sunday Night Football” broadcasts of all time.

The broadcast does not crack the all-time top-five highest-rated regular-season Patriots games in the Boston market. The Patriots-Giants finale in 2007 remains the standard-bearer with a 50.1 rating. That game, in which the Patriots completed a 16-0 regular season, aired on Chs. 4, 5, 7 and the NFL Network in the market.

The 43.8 rating did get close to the fifth-highest rated Patriots game of all time in the market, a 34-27 win over the Colts on October 18, 2015, which drew a 44.6 rating. The Patriots’ top five highest-rated games are all victories.

The 70 share for Patriots-Bucs – the percentage of televisions in use in a given market that are tuned in to a program – is the second-highest all-time in Boston, trailing only a 75 share for the ’07 Giants finale.

Nationally, NBC said the game averaged a 14.6 rating and 34 share. 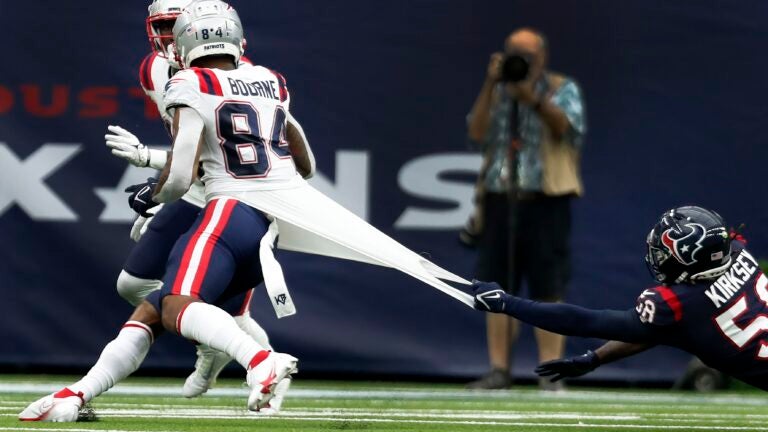 3 takeaways following the Patriots' messy win over the Texans