The Patriots couldn’t pull off the upset against the Buccaneers on Sunday, but managed to keep the game close partly thanks to an efficient passing game.

Mac Jones, the Patriots’ rookie starter, connected on 31 of 40 attempts. And as has become an effective option on trick plays, Jakobi Meyers went 2-2 throwing the ball, including the Patriots’ longest pass of the day to fellow receiver Nelson Agholor (for 30 yards).

Asked during an interview on WEEI’s “Merloni and Fauria” about Meyers as a quarterback, Jones praised his teammate’s toughness and versatility.

“Jakobi, he’s got a nice arm and he had some good passes last night,” said Jones. “He’s a tough dude. Whatever position he’s playing, he plays hard. He does exactly what the coaches and everyone asks of him. He’s just a great player.

“We can try to model our game to be like him. That’s what I look up to sometimes,” Jones explained. “He’s here, he’s working, he’s trying to do the right thing, and that’s what I’m trying to do.”

Still, despite the encouraging signs, New England fell short in the game. Now 1-3, Jones knows the Patriots have to find a way to start getting back into the win column.

An interestingly tool Jones utilizes to help him grow in his first NFL season is an “improvement journal.”

Asked what it is, and how he employs it, Jones elaborated on his process.

“My notebook for each week always have one to two pages of the good, bad, and the ugly. I’ve done that since I was in Alabama,” he noted. “I’ll write down half a page of what I did well, and two or three pages of things I did bad or ugly, so it’s not like a magical thing.”

As for his takeaways from the duel with Tom Brady, Jones simply reiterated the thin margins in the NFL.

“Last minute of the game, we were one or two plays away. We’ve said over and over again that’s what it comes down to,” said Jones.

“It sucks, but it’s part of football. It’s not always going to go your way, but you have to just keep moving forward and try to get some wins on the board.” 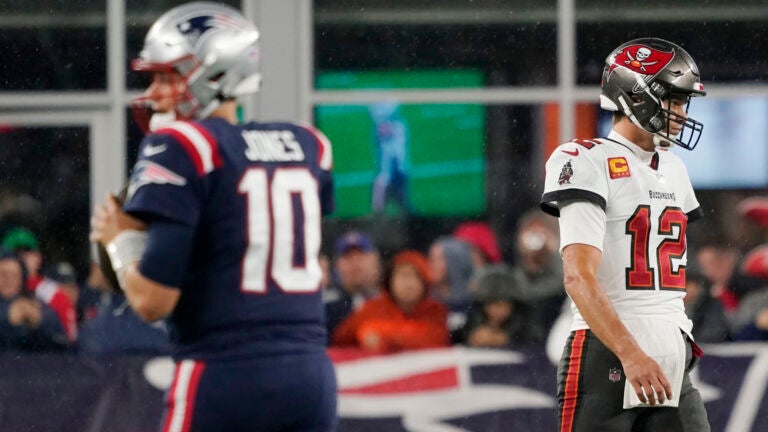