Both the Patriots and the Houston Texans come into their game Sunday with records of 1-3. But let’s be honest: No one really thinks New England is going to lose this weekend.

And why should they?

The Texans, who won the first game of the season against a pitiful Jacksonville squad, have lost three straight weeks by a combined 65 points.

Their best player, Deshaun Watson, is essentially sitting out the season as he waits to be traded. Watson’s original replacement, Tyrod Taylor, is out with a hamstring injury, and inexperienced rookie quarterback Davis Mills tossed four interceptions in a loss to Buffalo.

What’s there to worry about?

Aside from the major questions New England has along their own offensive line this week, there are also a few Texans — including a former Patriot — worth highlighting when they’re on the field.

The Patriots know all about Cooks, of course.

The dynamic wide receiver put up 1,082 yards on 65 catches for New England in 2017 and was the team’s best pass-catcher not named Rob Gronkowski that year.

This year, the veteran wideout happens to be the only thing to worry about in the Texans’ passing game right now.

Cooks leads Houston in targets (39), catches (28) and receiving yards (369). The next most targeted Texans receiver, Anthony Miller, just got cut this week, to give you an idea of how things are going for them. Then, the second-highest catch total is eight (David Johnson), and the next-highest yardage total is 73 (Pharoah Brown).

That said, the Patriots can’t afford to lose track of Cooks. He still has the speed to beat teams deep, and he remains adept at finding holes in zones for quarterbacks who are capable of exploiting them.

New England’s defense is one of the best passing defenses in the league, ranking fourth in yards (740) and touchdowns (3) allowed. So they should know their assignment well: Limit the damage he does and make someone else on the Texans beat you.

Who knows what the Patriots’ offensive line will look like on Sunday with only one offensive lineman, center David Andrews, not either on the injury report or the COVID-19 reserve list.

You could be looking at a starting lineup that includes not just backup guard Ted Karras but backup tackles Justin Herron and Yodny Cajuste on either side.

That’s not a good situation going against any NFL defense, even the Texans’. It’s especially not a good sign for an offensive line that dropped to 20th in pass-blocking efficiency before those new absences, according to Pro Football Focus.

Though neither has a sack, Omenihu (edge rusher) and Collins (defensive tackle) lead Houston in quarterback pressures by a wide margin with 11 and 10, respectively. Both also move around the defensive line both positionally — Collins sometimes bumps out to defensive end — and from left to right. Though both have seen most of their snaps coming from the offense’s right side, their reps are split more evenly on both sides than other defenders the Patriots have faced.

If the Patriots’ offensive line were healthy and playing up to capabilities, players like Omenihu, Collins and veteran edge rusher Whitney Mercilus wouldn’t be an issue for New England.

Unfortunately, neither of those things is true, and too many pass rushers have eaten against the Patriots this year to dismiss anyone.

Though New England hasn’t allowed an individual 100-yard rusher yet, both the Saints’ Alvin Kamara and the Bucs’ Leonard Fournette have topped 85 yards rushing and 100 scrimmage yards in total against this defense the last two weeks. What’s more, Tampa Bay’s only touchdown in Week 4 came on the ground courtesy of Ronald Jones Jr.

The former Alabama product isn’t at Kamara or Fournette’s caliber, and the offense surrounding him isn’t helping his production (171 yards rushing through two games). He also has to run into eight-man boxes more than all but three running backs in football (46.15 percent).

But the Patriots have proven they can be moved around up front, even by a poor offensive line such as the New York Jets’ (152 rushing yards allowed in Week 2). There will likely be a hole or two available for the veteran back to scoot through.

Proving they can take care of business and bringing down the physical Ingram would be a welcome sign after giving up more than 120 total rushing yards three weeks in a row.

With that in mind, keep an eye on backups Phillip Lindsay and David Johnson as well. Johnson, in particular, leads the running back room in receptions (eight) and receiving yards (67). 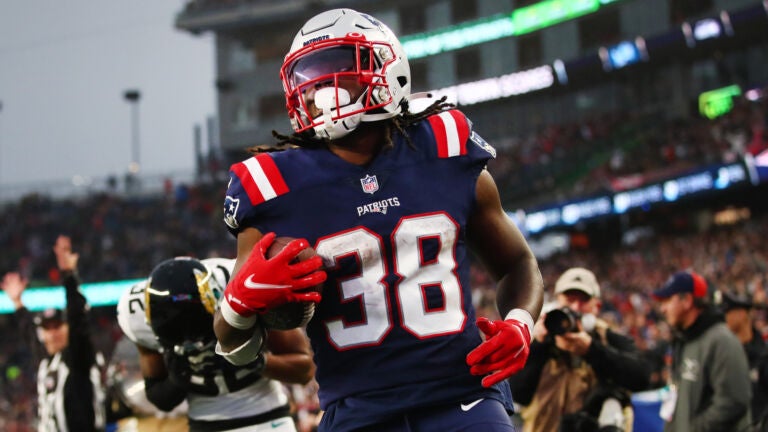