Zach Wilson’s first matchup with the Patriots couldn’t have gone much worse.

The rookie quarterback threw four interceptions as the Jets lost, 25-6, in Week 2 of the season.

With the 1-4 Jets coming off a bye week, and facing New England again this Sunday at 1 p.m., Wilson believes he and his teammates are prepared for a different outcome. He called this game “a stepping stone,” just like the first meeting, and indicated that he’s encouraged by his team’s trajectory.

“We’re building something here that’s going to be special for a long time,” Wilson told reporters. “When it’s going to be super-special, we don’t know, but all we have to focus on is one step at a time, throwing those bricks down and getting better. I’m excited to play these guys again. I think it’s going to be a blast.”

Wilson addressed his woes in the initial matchup and acknowledged he has to be better. He said he didn’t think he was forcing the ball, but he was making throws that were too risky given how the game was unfolding.

He said there are times when the Jets will need to take shots downfield, but his timing wasn’t the best considering the Jets defense was having decent success against the Patriots and the score was still relatively close.

Wilson, whose first two pass attempts were picks, has moved on from that start, and so too has offensive coordinator Mike LaFleur. He said the focus isn’t on how many interceptions Wilson threw or didn’t throw, it’s about executing the play in front of them collectively and not making a bad play worse.

“The four interceptions, obviously that happened,” LaFleur told reporters. “We want those back, and I want to put him in a better position right from the get-go to make sure that doesn’t happen.” 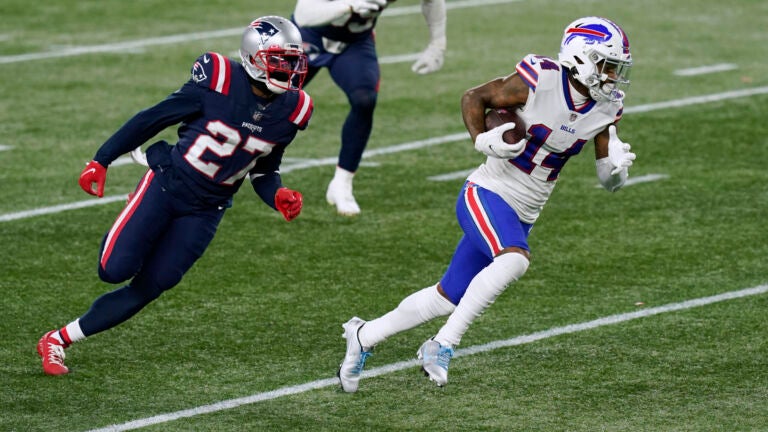