The NFL descended into peculiarity Sunday. The Los Angeles Chargers drove 98 yards on one possession, from their 1 to the other 1, without scoring points. The Dallas Cowboys blocked a punt that produced a first down for the Denver Broncos. Josh Allen sacked and intercepted Josh Allen. And that is without considering the bizarre upsets that made it even tougher to make sense of a season that wasn’t making much to begin with.

Here is what to know.

– The Buffalo Bills are losing their grip on the AFC East. The Bills won their division last year for the first time in 25 years, and the ascent of Josh Allen coupled with the departure of Tom Brady gave them an opening for a long reign. The New England Patriots may have already closed the gap, owing to their midseason surge and the Bills’ uninspired past month.

The Bills suffered a stunning loss at Jacksonville, failing to score a touchdown as the Jaguars beat them, 9-6. Allen committed three turnovers and made critical errors on what could have been a game-tying drive, passing up a scramble for a likely first down and then taking a sack on the next play. The game reaffirmed fears that Buffalo lacks the physicality to be a Super Bowl contender. They yielded four sacks and aside from Allen ran nine times for 22 yards.

The Bills fell to 5-3, with four of those victories coming against Washington, Miami and Houston. The Patriots improved to 5-4 with a 24-6 demolition of the Carolina Panthers, their third consecutive victory. Bill Belichick continued his habit of making life hell for Sam Darnold, who threw three interceptions. The best came from Jamie Collins, the hyper-athletic linebacker on his third Patriots stint.

The Patriots and Bills play in Week 13 and 16, and those games may decide the division. Even if the Bills rediscover their form, the unnecessary loss in Jacksonville could doom their chances of securing a first-round bye. They already have three AFC losses, which could be poison for tiebreaker purposes.

– The Kansas City Chiefs still haven’t figured it out. The Chiefs have climbed above .500 by specializing in victories that do nothing to suggest they are back on a Super Bowl track. One week after squeaking by the mistake-prone New York Giants, the Chiefs exploited the rocky debut of Jordan Love and survived the Green Bay Packers, 13-7.

Patrick Mahomes still hasn’t solved the shell-like alignment defenses are throwing at him. He completed 20 of 37 passes against the Packers for just 166 yards, and the Chiefs totaled only 237.

– The Cleveland Browns benefited from the absence of Odell Beckham Jr. That may be a harsh assessment, but it would be difficult to arrive at any other conclusion after the Browns’ 41-16 victory at the Cincinnati Bengals. Baker Mayfield played one of his most efficient games of the season, completing 14 of 21 attempts for 218 yards, two touchdowns and no interceptions.

The Browns played the game on their terms because of Denzel Ward’s 99-yard interception return for a touchdown on the opening drive. But Mayfield played with confidence and never let the key AFC North game be in question. He completed 7 of 8 first-half passes for 121 yards, including a 60-yard bomb to Donovan Peoples-Jones, for a perfect 158.3 passer rating at halftime.

– Lamar Jackson may win another MVP award. Every week, Jackson makes plays that nobody else in the NFL can manage appear utterly routine. On Sunday, the Ravens sleepwalked through the first two-plus quarters and trailed the Minnesota Vikings by two touchdowns. Jackson took the game over and finished with three touchdown passes and 120 rushing yards in a 34-31 overtime victory.

For Jackson, that kind of stat line is unsurprising. But who else in the NFL is capable of it? No team is more reliant on any player than the Ravens are on Jackson. He is Atlas. For both his bottom-line production and his importance, Jackson could be the MVP front-runner, especially after Allen’s utter flop and the way Matthew Stafford barfed up interceptions Sunday night in a 28-16 loss to the Tennessee Titans. Halfway through the season, Brady is probably the only player who could make a good argument against Jackson.

– The San Francisco 49ers are in a spiral. Sunday should have been an ideal moment for the 49ers to right their season and inch back to .500. They got star tight end George Kittle back from injury. The Arizona Cardinals were without MVP candidate Kyler Murray and top wide receiver DeAndre Hopkins. The 49ers were playing at home.

Coach Kyle Shanahan earned a reputation as one of the NFL’s best coaches as the 49ers reached the Super Bowl. His football genius, at least when it comes to managing a franchise, is becoming a myth. Shanahan is 32-40 as a head coach and has not made the playoffs in any season but the Super Bowl run.

Shanahan’s decision to trade three first-round picks to move up and take Trey Lance third overall may pay off in the future, but so far all it has done is derail a team many expected to compete for the Super Bowl. The 49ers could have used the 12th pick to add to a team with the talent to contend. Instead, Jimmy Garoppolo has regressed and Lance hasn’t been ready.

The trade – which looks worse as Mac Jones, taken 15th, steers New England capably – will compromise the 49ers next season, too. Unless they can turn this season around, the 2022 first-round pick they sent the Miami Dolphins to move up could end up being in the top 10.

– The Dallas Cowboys suffered an inexplicable loss. One week after Cooper Rush filled in and the Cowboys looked like the best team in the NFL, Dak Prescott returned and they couldn’t get out of their own way. The visiting Denver Broncos, last seen barely beating Washington at home and trading Von Miller, threatened to shut out the Cowboys in a 30-16 victory that wasn’t even that close.

Unless it turns out Prescott’s lousy performance – 19-for-39 passing for 232 yards – was related to his health, which didn’t appear to be the case, the Cowboys probably can wave off the defeat as just one of those weeks. The way Denver throttled Dallas’s defense on the ground was troubling, but if the Cowboys’ offense operates as it should, opponents shouldn’t be able to keep up with them by running. On Sunday, their offense didn’t.

The Broncos, meanwhile, may not be dead despite declaring their intention to look toward the future by trading Miller. At 5-4, they are a half-game out of first place in the AFC West. And at plus-34, they have the best point differential in the division.

– The Indianapolis Colts beat the New York Jets on Thursday night, and the Philadelphia Eagles won. Huh? Well, the Eagles are invested in the Colts’ success this season because of how they were compensated in the Carson Wentz trade.

The surest route to Wentz playing those snaps, presuming he stays healthy, is the Colts remaining in the playoff hunt. Their victory over the Jets pushed them to 4-5, enough to keep pace with the Titans, whose hold on the AFC South was jeopardized by Derrick Henry’s potentially season-ending foot injury.

Wentz has played 99% of Indianapolis’s snaps so far, which puts the Eagles in good position to add a third first-round pick in 2022. They also have their own and the first-rounder they got from the Dolphins when Miami moved up to draft Jaylen Waddle in April. That Miami pick could be a huge asset, given the Dolphins’ 2-7 record. 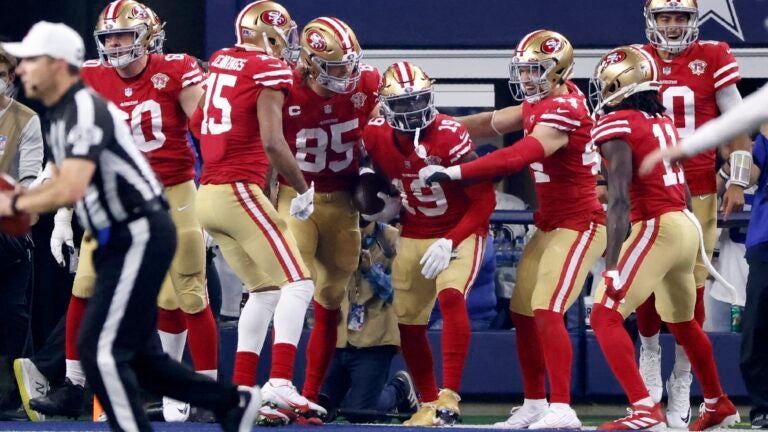