Not even Payton Manning can land a Mac Jones 1-on-1.

The Patriots are notoriously stingy with media access, and when rookie quarterback Mac Jones is involved, even Peyton Manning can’t get a pregame interview.

Eli took Peyton to task in the first half for referencing his interview with Josh Allen repeatedly and asked if he spoke to both quarterbacks.

“Well, I tried to talk to Mac Jones, and he was very respectful,” Peyton Manning said. “He said, ‘Peyton, I want to do it, but can you call our PR director Stacey [James]? Because he has to oversee all things.’ I said, ‘No problem.’

“I called Stacey, he was very professional. I said ‘Stacey, I’m talking to coach Belichick. Can I talk to Mac Jones?”

Manning built tension for a minute.

“I’ve got to tell you, I appreciate how they are handling Mac Jones,” Manning said. “They are trying to protect him, give him as few off-the-field distractions as possible, let him concentrate on playing football.”

So … Manning got denied?

“So yes I did get denied,” he said. “He was the first quarterback I haven’t talked to.”

Manning said the Colts did the same thing for him his rookie season in Indianapolis — telling potential interviewers and sponsors to leave their first-year quarterback alone.

“‘It’s all football this first season, don’t bother him,'” Manning said, quoting the Colts’ attitude. “I think the Patriots are taking that same approach.”

Both Mannings seemed amused (and disappointed) by the lack of passing.

As the game ended and the Mannings began to wrap up their broadcast, Eli noted to a disgruntled Peyton that he couldn’t remember a game like that one before.

“I thought Mac’s hand-offs were great,” Peyton said. “He looked them in, he seated the ball, he got the snaps very well from the center, he carried out his fakes. It was a thing of beauty. Textbook.”

“Mac Jones’s arm is going to be so fresh in the second quarter,” Peyton said. “It’s going to be live, rested.”

But the Patriots kept handing off. At one point, Peyton predicted a hand off and tried to take credit, but Eli shouted him down.

“If you predict the Patriots’ next pass correctly, then you’ll get credit from me,” he protested. “Until then no credit.”

When Letterman joined the broadcast in the second quarter, the camera panned to Bill Belichick wiping his nose with his hand, then wiping his hand on his shirt.

“Oh look at that guy. Yeah, just go ahead and use your hand Bill, and then wipe it on your shirt,” Letterman said, chortling. “I love that move.”

As the second quarter wound down, Letterman interrupted a completely separate thought as the camera panned to Belichick once again.

In fairness to Belichick, the wild weather might have made anyone’s nose run.

Jones told Manning he doesn’t use his phone during the week.

We already know Jones has his girlfriend help him run through the playbook. Apparently, he is so locked in during the week, he ignores his phone.

Peyton Manning found that out the hard way: Jones didn’t return his text for days, and when he did, he told the NFL Hall of Famer he doesn’t always check his messages during the week as he prepares for a game.

Manning, incidentally, was trying to contact Jones to ask his opinion on his new ESPN Detail video breaking down Jones’s game.

“Stop bothering the guy during preparation,” he said. “He has Monday Night Football. … he has real film to watch. Don’t bother this kid. Leave him a voice memo and get out of his way. Stop trying to take up his time.”

Talib, whose appearance on the broadcast was so good it probably warrants a return, confirmed to the Mannings he considered returning the Patriots at one point.

Per Talib, he spoke with Belichick who outlined his role. Belichick wanted Talib to be the team’s tight-end stopper, and when he told Talib the potential contract, Talib said he perked up. He told Belichick he would call him right back.

Then Talib began thinking about the league’s tight ends. He thought about Travis Kelce, Brandon Waller and Rob Gronkowski, and he thought better of it.

Talib explained quite a bit about Patriots culture.

The Mannings quizzed Talib about his time with the Patriots, and he was pretty insightful.

Talib noted that Belichick doesn’t have a dress code because he simply could not care less about what a player wears to the facility — whether they are in a suit or, like Vince Wilfork and Rob Gronkowski at times, pajamas or a onesie.

Talib added that staying in Belichick’s good graces is easier than some would say.

“It’s not that strict,” Talib said. “Don’t be late. … Know your stuff, and don’t play around with the media. You stick to those three rules, you’ll have a great time in New England, just like I did.”

Talib added that Belichick is absolutely the team’s defensive coordinator.

“I used to have a meeting with Bill at the beginning of the week to tell me my job,” Talib said. “Super involved in the defense. Bill is the defensive coordinator. Know that.” 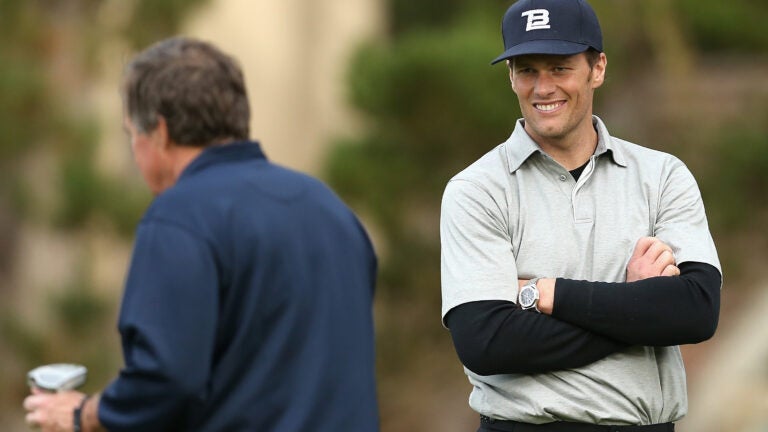