As a number of Patriots have already said this week, it’s do-or-die when New England faces off against the Buffalo Bills on Saturday night.

As much as Bill Belichick and Josh McDaniels have downplayed the importance of the potentially historic low temperatures in the forecast for this weekend, this game could end up another hard-fought contest that recalls Week 13’s Patriots victory at Buffalo more than Buffalo’s win at Gillette Stadium in Week 16.

Throw in the fact that lower-seeded opponents are 5-1 in divisional rematches in the playoffs, and who knows what could happen?

The big players are already well-known for both teams. But their importance has never been greater.

He’s the best player on either team.

Allen fell just short of willing the Bills to victory against the Patriots in Week 13 at home, but the fourth-year quarterback simply overwhelmed New England’s defense in Week 16 (314 yards passing, 3 TDs).

His combination of arm talent and raw athleticism created yards where there weren’t any in that second game, including on his crucial fourth-and-1 scramble in the fourth quarter.

The Buffalo weather appears to dampen his numbers a bit, but he’s shown he can drive the football through any conditions. The Bills will continue to rely on his arm as long as it’s just cold out there Saturday. But beware Allen’s legs, too.

Forget that Week 13 game where Jones only threw three passes. Assuming there’s no snow monsoon on Saturday, that’s not going to happen again.

The question is: can this version of Mac Jones win a playoff game? The last four games (putting the Jacksonville blowout aside) have not offered an encouraging answer to that query.

The Patriots will need Jones to make adjustments after Buffalo took away Jakobi Meyers and the middle of the field in their previous meeting. The rookie quarterback also has to selectively use his legs to keep the chains moving as teams haven’t respected him as a threat when he escapes the pocket.

It’s time for Jones to show the Bills a thing or two they haven’t seen from him. Another diet of the “same ol'” will probably see the Patriots eliminated from the playoffs.

The running back’s numbers haven’t been great in either game against the Patriots this year, especially not in that Week 13 game.

But despite a modest game in Week 16 with 78 total yards (39 yards rushing, 39 yards receiving), the eye test revealed a more physical Singletary than the one from the previous matchup. He hit holes hard and churned through contact for extra yards, helping keep the Patriots’ defense honest as Allen shredded them.

Even that little bit of life from the Bills’ starting running back can make a lot of difference for Buffalo. The game will still pivot on Allen’s arm, but production from Singletary and backup Zack Moss could be a big key to breaking the Patriots’ defensive game plan.

The one-time Defensive Player of the Year candidate has severely underperformed since the Patriots came off their bye week. Judon has just four pressures and hasn’t registered a sack or quarterback hit in that span. The outside linebacker also has just four stops in his last four games, with three of them coming against the Dolphins (via Pro Football Focus).

He also appeared to be a culprit on a big run by Miami’s Duke Johnson last week in which the running back broke contain to the outside.

Kyle Van Noy has been very solid as a do-it-all linebacker, especially when it comes to keeping quarterbacks like Allen in the pocket. But in a game like this, assuming pass-rushing defensive lineman Christian Barmore isn’t 100 percent or doesn’t play, the Patriots need early-season Judon — arguably their team’s best player — back more than ever.

No play encapsulates Diggs’s importance more than the late third-down conversion he had in Week 16 to help the Bills seal their win over the Patriots.

On 3rd-and-10, he found open space for a scrambling Allen and then simply willed his way to a first down. The Bills scored two plays later. It’s never just about the deep speed or exquisite route-running with Diggs. He simply finds ways to make winning football plays for your team.

The Patriots will have some vulnerabilities in the secondary this week with Jalen Mills’s status (Reserve/COVID-19 list) uncertain for wild-card weekend. That could mean two things: New England can have J.C. Jackson shadow Diggs, as he has done frequently in the past or play more zone defense with safety help to limit the receiver (or some mixture of the two).

Whether the mere threat of him opens up more opportunities for the likes of Gabriel Davis and Isaiah McKenzie against lesser defenders or whether he takes advantage of those matchups himself, he’s one of Buffalo’s most important offensive chess pieces.

Rhamondre Stevenson should play a big role in this game, too, assuming Harris is still on a pitch count due to his hamstring troubles. Cold weather is not great for balky muscles.

But Harris is the more dangerous of the two by far, and he was the best offensive player for the Patriots in that Week 13 road win against the Bills.

PFF’s top-graded running back has 12 “breakaway” runs (15+ yards), which is tied for sixth in the NFL this year and accounts for about a third of all his carries according to PFF. He’s also a top-20 running back in missed tackles forced (37), powering through defenders on a regular basis.

If the Patriots want to protect Mac Jones with the running game, they’ll need more than “three yards and a cloud of dust.” They need explosive plays on the ground, and no one on either team does that better than Harris.

Defensive linemen rarely make the headlines, but they make plenty of difference in a game like this with an opponent that’s expected to run the ball a good amount. Phillips is a good example.

The fourth-year defensive tackle had eight combined stops in Buffalo’s two regular-season contests against the Patriots — five in Week 13 and three in Week 16. No wonder he’s been the team’s highest-graded run defender this year (80.3).

Phillips, who primarily lines up over the center and left guard spots occupied by the likes of David Andrews and Ted Karras, can make a huge difference by taking up space and allowing Tremaine Edmunds and Matt Milano to gobble up the Patriots’ running game.

Smith has barely done anything for the Patriots’ offense this season aside from block a lot. Why would he be important now?

Well, partly because of his blocking. New England will certainly need it in games like Saturday’s if they’re going to establish the run game the way they want to.

But the other reason? It’s simply time.

The Patriots’ offense has become increasingly stale in the last four weeks (minus the Jaguars game), and Smith’s usage has been annoyingly predictable: occasional screens, an end-around here or there, maybe a short throw into the flat that lets him run after the catch. On the rare occasion he’s allowed to run actual tight-end routes, he doesn’t get targeted.

And yet, figuring out how to get the ball into Smith’s hands with room to run might be the simplest thing the Patriots can do to unlock their offense. He is the team’s biggest athletic mismatch for linebackers and safeties (though admittedly the Bills have some good ones). The moment New England figures that out is going to be the moment the offense looks like it can win a Super Bowl. 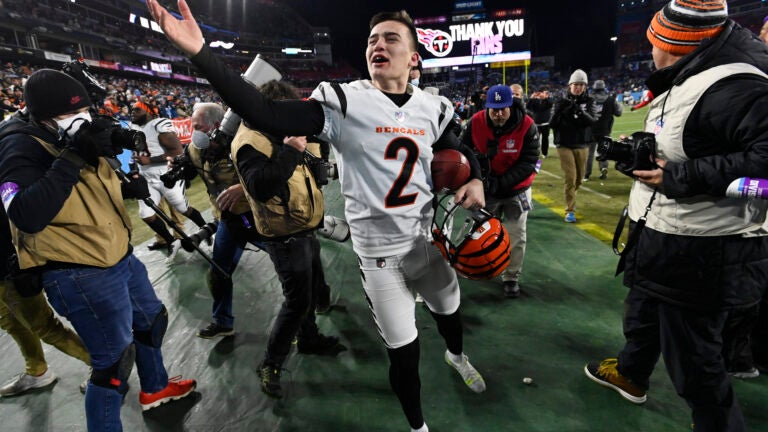