If you followed the Senior Bowl in 2021, you would’ve gotten an early look at a few Patriots players. Mac Jones, Rhamondre Stevenson, and Joshuah Bledsoe all played in the college all-star game a couple of months before getting drafted by the Patriots.

With that in mind, here are six Senior Bowl standouts that could be a fit with the Patriots.

Wyatt is one of the more highly-touted prospects that played in Mobile this past week. NFL Draft experts Todd McShay and Daniel Jeremiah believe Wyatt solidified his status as a first-round pick at the Senior Bowl.

“Some defensive linemen are all hands. Some are all about quickness and speed. But Wyatt ties his feet and hands together so well,” McShay wrote. “His feet are always moving while he’s working on blockers with his upper-body strength. He was already in the first-round conversation coming into the Senior Bowl, but he put a stamp on it this week.”

“He showed how dynamic and explosive he is, particularly in the one-on-one pass-rush drills,” Jeremiah wrote for NFL.com. “His combination of quickness and power was on display. He looked like a first-round pick.”

Wyatt doesn’t present the same size that his fellow Georgia defensive tackle and first-round prospect Jordan Davis does, standing at 6-foot-3 and weighing 307 pounds, but his lateral quickness has been praised by scouts. He was among several standouts on Georgia’s defense en route to the Bulldogs’ national title run, recording 39 combined tackles (seven for loss), 2.5 sacks, two forced fumbles.

At first glance, the Patriots don’t have a pressing need at defensive tackle. They just drafted Christian Barmore in the second round last season and he had a promising rookie year. But Lawrence Guy turns 32 in March and Davon Godchaux could be someone the Patriots cut to clear cap space.

Could the Patriots draft a defensive lineman from Oklahoma for a second straight year? Perrion Winfrey, a former teammate of 2021 third-round pick Ronnie Perkins, won the MVP of the Senior Bowl on Saturday, recording two sacks and three tackles for loss in the game.

Winfrey isn’t projected to be selected as high as Wyatt, with Bleacher Report currently projecting him to be a late third-round pick. But that could change after a solid week at the Senior Bowl. Like Wyatt though, Winfrey’s hands and foot speed have been praised by scouts. But Bleacher Report NFL scout Derrik Klassen is warning teams to be careful with selecting Winfrey.

“Winfrey has exciting traits and developmental value, but he is at least a few years away from being NFL-ready,” Klassen wrote. “He’s also best suited for a role that is no longer as prevalent in the NFL as it once was.”

Watson only had one catch in Saturday’s game, but it was an impressive one. He caught a low pass from Pittsburgh quarterback Kenny Pickett, falling to the ground to make the grab before getting up and running for a 38-yard gain.

Watson presents good size, standing at 6-foot-4 and weighing 210 pounds, and speed, running a 4.40 40-yard dash at one of his school’s workouts. He had a solid season at North Dakota St., recording 43 catches for 801 yards and seven touchdowns.

The Patriots’ need for a receiver is apparent, especially as Mac Jones continues to progress. And it looks like New England has some interest in the North Dakota St. product. Watson shared he spoke with the Patriots and what he likes about them.

Watson also shared what his best traits are.

“I’d say the combination of my speed and my size, the way I’m able to utilize my speed and my quickness to gain separation separates me from other receivers,” Watson said.

Penning was a social media star of Senior Bowl practice week, with one clip in particular of his one-on-one blocking going viral.

Jeremiah shared that his blocking in clips like that is a reason why he’s high on him.

“The highlights of Penning’s nasty finishes continue to make the rounds on social media,” Jeremiah wrote. “He earned rave reviews for those plays, although they didn’t come as a surprise. There’s a reason he’s my No. 25 prospect in the draft. Penning still had some issues with getting a little bit too high in his pass protection, but I thought he showed improvement in that area as the week went along. He didn’t see a lot of elite pass rushers in college, which is why this week is so important for him. I thought he handled himself well against a good defensive line group in practice.”

Penning is huge, standing at nearly 6-foot-7 and weighing 330 pounds. The Draft Network’s Drae Harris believes that Penning’s best fit could be in a power run scheme, but believes he can fit anywhere.

“Good athlete with good explosion and agility to get out on the perimeter,” Harris wrote. “In the run game, he is a nasty and physical player. He has a savage temperament and has finished several plays with the defender on the ground. He is extremely powerful at the point of attack and gets consistent vertical movement in the run game.”

Scouts view Penning as someone who could rise into the first round of the draft.

The Patriots had solid line play once right tackle Trent Brown returned from injury midseason in 2021. However, Brown’s an unrestricted free agent and starting left tackle Isaiah Wynn’s entering the final year of his rookie deal. With uncertainty at both tackle spots beyond 2022, it wouldn’t be a shock if the Patriots drafted one this spring. Bill Belichick has selected a few offensive tackles in the first couple rounds of the draft in the past, too, notably selecting Wynn and Nate Solder in the first round.

Hall has fans in both Jeremiah and McShay, who both named Hall among one of their top performers of Senior Bowl week. Jeremiah praised Hall’s athleticism while McShay wrote that he’s a fan of Hall’s versatility.

“He’s active with his hands, quick and ultraversatile,” McShay wrote. “I could see him playing defensive end or 4-technique in a 4-3 scheme, or the 5-technique or nose tackle in a 3-4. Watching him this week, I struggle with why he isn’t in the first-round conversation. Maybe it’s simply because he doesn’t have a true fit. Versatility can work for and against you. But personally, I love a player who offers the ability to play all over the place.”

Hall’s very tall, standing at 6-foot-6, and weighed 278 pounds at the Senior Bowl. He had an impressive year at Houston, recording 47 combined tackles (13 for loss) and six sacks.

Klassen is a fan of Hall’s hands.

“Logan Hall is a tone-setter up front,” Klassen wrote. “He packs a ton of power into his punch and plays with an attitude on every snap.

“In run defense, Hall’s heavy hands and strong anchor allow him to take control of blocks early on. His lower-body strength and heavy hands show up just the same in the passing game. Hall has relentless leg drive as a pass-rusher in addition to active, violent hands.”

Hall’s currently projected to be a late first-round/second-round pick.

Bryant earned the respect of his fellow wide receivers during Senior Bowl week, getting named the top corner of the week.

Bryant had a standout season at Cincinnati, recording three picks, two forced fumbles, and 11 passes defended en route to winning the Jim Thorpe Award for the country’s top defensive back.

Despite earning the high honors though, Bryant’s not projected to be a first-round pick. Scouts currently project him to be a third-round pick. While Bleacher Report NFL scout Cory Giddings likes Bryant’s size (6-foot-1, 191 pounds) and athleticism, he doesn’t like Bryant’s ability to “set the edge” as a run defender.

“Oftentimes he can get pushed around by both receivers and linemen,” Giddings wrote. “Though he is able to disengage and find the ball, he can be soft on the edge; preferring to defeat most blocks with speed. He does well tackling when filling running lanes, delivering a good blow on contact. Although he is willing, he struggles tackling in space at times.”

“He shows some tightness when flipping his hips, he is able to open and run; carrying most receivers deep,” Giddings wrote. “When playing in off coverage, he does a very good job of seeing the quarterback, through the receiver and getting out of breaks to play the ball. Although he plays with a good feel for the position, he struggles with his change of direction at times, falling susceptible to double moves and shiftier receivers. Bryant has shown good ball skills and timing; with the ability to stay calm when playing the ball in the air.”

The Patriots will have to address their cornerback situation in some form this offseason. Star corner J.C. Jackson is an unrestricted free agent and they lacked much depth outside of him this past season, especially after slot corner Jonathan Jones went down for the season with an injury. 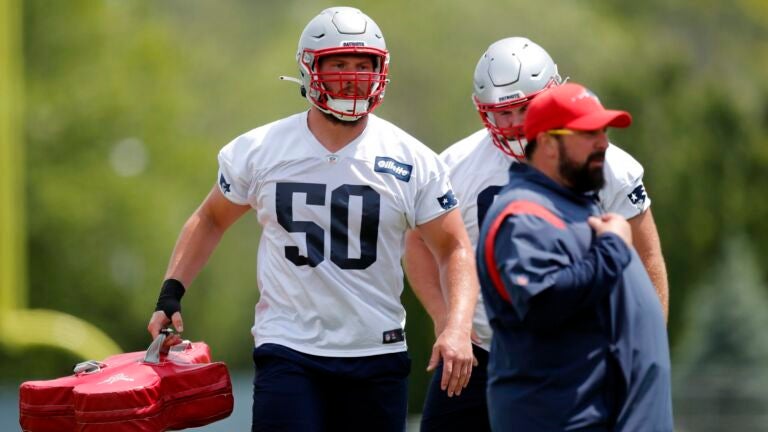