According to the reporting revealed in an upcoming book, former President Donald Trump was “bothered” by Patriots coach Bill Belichick’s decision to not accept an offer to receive the Presidential Medal of Freedom in early 2021.

In addition, the former president also claimed that Belichick took time to seek Trump out on the golf course several months later.

For the the upcoming book “This Will Not Pass: Trump, Biden, and the Battle for America’s Future,” New York Times reporters Jonathan Martin and Alexander Burns spoke with Trump in April, 2021. Included in the interview was Trump’s characterization of Belichick.

The details of the interview were released ahead of the book’s May 3 publication date as part of an excerpt shared by Charles Robinson of Yahoo Sports.

In the excerpt, Trump’s account of his relationship with Belichick is covered, including the Patriots’ coach’s refusal to accept the Medal of Freedom in the immediate aftermath of the Jan. 6 attack on the United States Capitol by Trump’s supporters.

Trump bragged that it was not only Republican politicians who had crawled back to his side after briefly rejecting him after January 6.

One of the rejections that had bothered him the most had come from Bill Belichick, the legendary coach of the New England Patriots who had declined Trump’s attempt to grant him the Presidential Medal of Freedom. In the immediate aftermath of the riot, it was just not possible for him to appear with Trump. Back then, Trump said, Belichick had “chickened out.” But get this, Trump confided: The coach had just a week earlier been playing golf at Trump’s nearby course. Trump had run into him there on the second-to-last hole. “He came up to me on the seventeenth,” the former commander-in-chief recounted with relish.

Stretching credulity for anyone familiar with Belichick’s gruff persona, Trump claimed: “He hugged me and kissed me.”

The Belichick-Trump moment on the golf course allegedly happened in March, 2021.

Belichick’s declined the Medal of Freedom days after the attack on the Capitol, citing “the tragic events of last week” as a reason.

Over the weekend, Belichick was reportedly at Trump’s Mar-a-Lago club in Florida, according to Politico journalist Meridith McGraw. Belichick and Linda Holiday were also spotted alongside former Jaguars coach Urban Meyer in a photo posted to social media by Ohio real estate executive Brian Schottenstein. 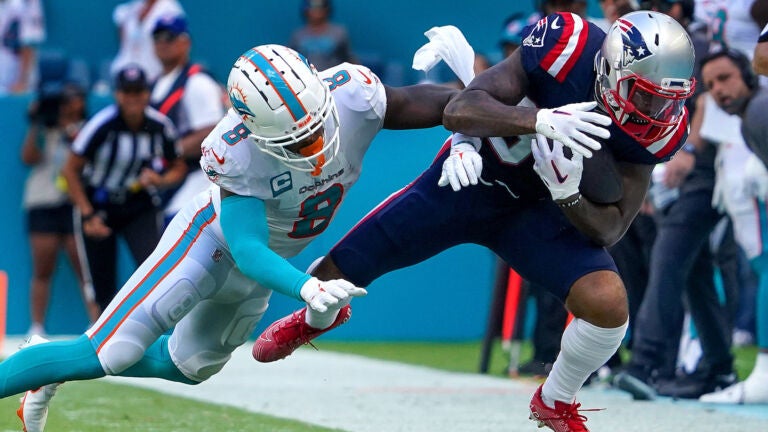