As much as people like to downplay the value of watching players run around on the field in shorts at the NFL Combine, there’s a reason teams like the Patriots watch them every year rather than just interviewing prospects and being done with it.

Testing prospects at the combine allows you to compare what you think you know about a player on tape versus what you see up close. Maybe they’re exactly what you figured. Maybe they’re slower or smaller than you expect. Or maybe they’ve got even more athleticism and upside than you thought, creating new visions of how to use them on the field.

Though the film a player puts out is their main resume, the Patriots have been known to value good performance in certain drills as they project how a player will fit their scheme. For example, New England linemen often test well in the bench press, showing how much they value strength at the point of attack.

Then, there’s the three-cone agility drill, which seems to be a key component in which edge-defenders the Patriots draft. Interestingly, though, a good three-cone time might have also been part of why New England drafted Tre Nixon; his 6.81-second three-cone was 11th out of 63 receivers who did the drill at pro days last season during the pandemic.

The NFL Draft is too unpredictable to suggest any one drill truly predicts who the Patriots will select next month. But here are a few players who showed off the kind of athletic traits New England typically likes to see, especially when looking for diamonds in the rough in later rounds.

On paper, the Patriots don’t need an interior offensive lineman this year necessarily. They have David Andrews, Shaq Mason and Michael Onwenu under contract, and there’s still a chance they’ll bring Ted Karras back on a short deal.

But Johnson, a former Boston College Eagle, has just about everything New England loves in an offensive lineman and then some.

At the NFL Combine, he backed up his ideal size (6-foot-3, 312 pounds) with elite measurables (34-inch arms, 10 5/8-inch hands) and a Combine-best 32 reps on the bench press. The Patriots love pure brute strength in their offensive linemen, as evidenced by four of the last five offensive linemen they’ve drafted posting 26 or more reps on the bench in pre-draft workouts.

But Johnson also put up the third-best 20-yard shuttle (4.46) and fourth-best three-cone drill (7.38) among offensive linemen at the NFL Combine, suggesting he has the short-area quickness and athleticism to get after blockers in space.

It might be a bit much to select Johnson No. 21 overall, especially with cornerback being such a position of need. Most, if not all, of the corner prospects the Patriots might want should still be there at No. 21.

Still, protecting Mac Jones is no less important than defending the pass, and investing in a powerful young guard could let them move on from Shaq Mason soon without much dropoff (hopefully). Should the Patriots trade back a few spots in the first round and recoup some draft value in the second or third round, taking Johnson with their first pick (if he’s still there) could be a bit less crazy.

Though New England is reportedly showing interest in adding star receiver Amari Cooper if he’s released or potentially trading for Robbie Anderson, those moves might require some serious financial manipulation to make happen.

But if the team is truly convinced Nelson Agholor isn’t it for them, they could potentially grab and develop a similar, if not more athletic, version of him in Austin.

The former Notre Dame receiver essentially had just one year of football in college due to injuries and a suspension for marijuana use. In that 2021 season, he was frequently the offense’s second option behind standout tight end Michael Mayer. But Austin’s 888 yards and seven touchdowns on 48 catches is nothing to scoff at.

The best part: those traits show up on tape, making Austin a highly intriguing and still highly moldable deep threat in the NFL. His athletic ability would make him very valuable as a mid-to-late round flyer with a chance to provide some of the speed and deep-ball capability the Patriots keep trying and failing to find.

Robinson just feels like the kind of player the Patriots would see value in as the middle rounds of the draft flow on.

Though he doesn’t quite have elite outside linebacker size (6-foot-5, 253 pounds), the converted wide receiver has tremendous athleticism for the position. While his combine-best 41-inch vertical is no doubt impressive, his 25 reps on the bench press might have been even more notable where the Patriots are concerned. That number put him just below Oregon standout Kayvon Thibodeau’s event-leading 27 reps.

Belichick typically likes his edge defenders to play with force against the run in addition to being able to rush the passer. Though Robinson is still raw in that aspect as he continues to learn the position, he has solid strength and may have room to add more weight and muscle in the NFL.

The amazing thing: Lance Zierlein already grades Robinson as having the potential of “eventually being a plus starter” in the pros after playing as a defensive end for just two seasons.

If Belichick can get his hands on Robinson during Day 3 of the draft, that could be an impressive way to retool his linebacking corps with speed and athletic ability.

The Patriots should draft a starter-level cornerback early in the draft whether they sign a free agent or not. But they also shouldn’t be afraid to take another one to create more depth at the position after struggling in that department late in the season.

They should absolutely be high on McCollum after watching him at the NFL Combine.

The FCS product out of Sam Houston State owned every drill he participated in, posting the best three-cone (3.94 seconds) and 20-yard shuttle (6.48 seconds) of the entire combine, placing first among corners in the broad jump (11 feet), putting up a 39.5-inch vertical (second among CBs) and running a blazing 4.33 40.

Though teams will understandably have questions about the competition level McCollum faced, no one can question his raw ability. For a defense hoping to get faster in a division that features Josh Allen, there’s a lot of value in trying to develop these kinds of traits with a mid-round pick.

McCollum should also provide instant special teams value and, as Zierlein notes, could have potential as a rangy safety as well. 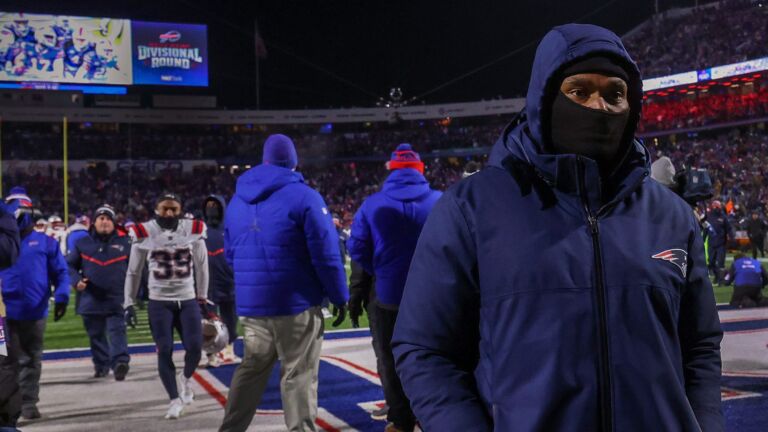