A year after adding several players in the league’s biggest spending spree ever in free agency, a top Patriots insider believes New England will be saying goodbye to players this time around.

The potential departure of Jackson shouldn’t be too surprising. New England had a chance to franchise tag the Pro Bowler earlier in March but opted not to. Now, Jackson is reportedly looking to be paid as one of the top corners in the league, and it appears that he might get his wish. Multiple insiders and analysts projected Jackson to sign a contract worth at least $15 million per year over several seasons.

Hightower leaving would be a bit more surprising. The veteran linebacker has been in New England since the Patriots drafted him in the first round of the 2012 NFL Draft. While Hightower’s given them outstanding play over the years – a two-time Pro Bowler who played a pivotal role on three Super Bowl-winning teams – he’s also been viewed as a leader of the Patriots’ defense.

Reiss predicts that Hightower will sign with the Steelers, who made Hightower an offer in 2017.

Brown made his way back to New England prior to the 2021 season after the Raiders traded him to the Patriots. In order to facilitate the trade, Brown restructured his contract, taking a pay cut that would allow him to become a free agent sooner. When Brown was a free agent in 2019, he opted to take the money – signing a four-year, $66 million deal with the Raiders – over staying in New England.

When he was traded back to the Patriots, Brown was happy with the news, so maybe that could help New England at the negotiating table this time around. However, the Patriots’ offensive line got off to a noticeably poor start last season when Brown was out before turning it around in his Week 10 return, which could give Brown some leverage there.

Bentley was the team’s leading tackler in 2021 with 109 combined tackles. The fourth-year pro has been in New England since it drafted him in the fifth round of the 2018 NFL Draft. Collins returned to the Patriots for a third stint midseason after the Lions released him in October. He recorded 20 combined tackles and a pick in 10 games last season.

Reiss does view a few impending free agents likely to stay in New England. He believes safety Devin McCourty, special teamer Matthew Slater, and backup quarterback Brian Hoyer will all be back with the Patriots in 2022, citing the Patriots’ desire to stabilize their culture.

“For a Patriots team with limited cap space compared to last year, bringing back Slater (minimal cap charge) and McCourty (who still figures to command a significant contract) could turn out to be their signature moves, resulting in them picking spots judiciously in other areas of free agency,” Reiss wrote. “It doesn’t rule out a big signing, but it would have to be viewed as a rare opportunity, similar to 2017 when the Patriots surprised by landing cornerback Stephon Gilmore.

“Culture has been a critical component of the Patriots’ success in Belichick’s 22 seasons, and McCourty and Slater are two of the greatest leaders and tone-setters in the history of the organization. Once they depart, who carries the torch in their place?

“Buying more time with them to help groom the next generation — perhaps led by quarterback Mac Jones — has merit as long as the team has another strong draft and develops others already on the roster.”

As Reiss mentioned, McCourty appears to be in line for another solid payday after recording three interceptions last season. Pro Football Focus projects McCourty to sign a two-year, $12 million deal.

Those aren’t the only Patriots players set to become free agents on Wednesday. Running backs James White and Brandon Bolden, kicker Nick Folk, and guard/center Ted Karras will all become free agents and Reiss views those four as toss-ups to return.

White’s been viewed as one of the more consistent Patriots players over the last several years, recording at least 49 receptions per season from 2016-20. But he only played in three games last season due to a hip injury. White was a free agent in 2021 and opted to stay in New England on a one-year deal.

The other three from that list were all pleasant surprises for the Patriots in 2021. Bolden stepped up in White’s role, catching 41 passes for 405 yards and two touchdowns out of the backfield. Folk was one of the league’s best kickers, finishing sixth in field goals made percentage. Karras was effective when he became the Patriots’ starting left guard, ranking as one of the league’s best pass-blocking guards at one point in the season.

No matter who the Patriots decide to sign, they’ll have to be frugal in doing so. The Patriots have roughly $10 million in cap space, according to salary cap guru Miguel Benzan. 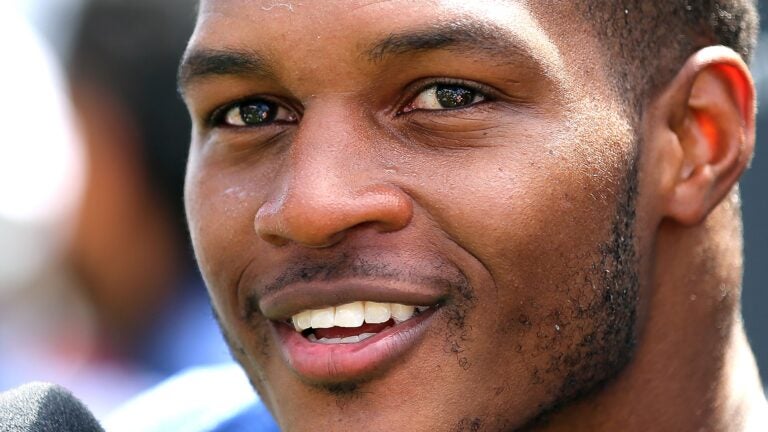