DeVante Parker isn’t a man of many words, but he made his desire to be with the New England Patriots abundantly clear during his first presser as a member of the team on Thursday.

On multiple occasions, Parker confirmed the Patriots were his top trade destination this offseason, which had been hinted at by NFL Network’s Ian Rapoport after Miami dealt Parker and a 2022 fifth-round pick to New England in exchange for a 2023 third-rounder.

“It means a lot to me,” he said of being a member of the Patriots. “I chose to get traded here. … They’re great guys already. They’ve brought me in just like a family, and it’s something I love already.”

He also slipped in an update on Jones that fans will likely be happy to hear based on his first impressions of the young quarterback: “He’s got a nice arm on him. A little zip in it,” Parker said of Jones. “It’s just good for me to start throwing with him early and get the timing down.”

“The way he throws the ball — it’s not tough,” he continued. “He throws a catchable ball. … It’s something I’m looking forward to in the season.”

Aside from developing his rapport with Jones and the other receivers, Parker’s main goal will be staying healthy. He’s only played a full season once in his seven-year career to this point; in that year, he caught 72 passes for 1,202 yards and nine touchdowns — all career-highs. To that end, he said he’s doing more running this offseason to try and keep himself in better condition.

When he’s on the field, the 6-foot-3 receiver mentioned his ability to high-point the ball over defenders and get vertical down the field as strengths he hopes to bring to the Patriots’ offense.

Parker also noted the similarities he sees between the Patriots’ offense and what he’s run with the Dolphins, pointing out that former Miami offensive coordinator Chad O’Shea came up through the coaching ranks under Bill Belichick in New England.

“I think the offense helps everyone out a lot, with the way they can move you around and things like that,” he said.

Though Parker will likely spend more time at the outside (“X”) receiver spot, allowing the likes of Agholor and Bourne to slide inside to run from the slot more often, it certainly seems as if Parker will fit right into the versatile framework the Patriots like from their receivers. 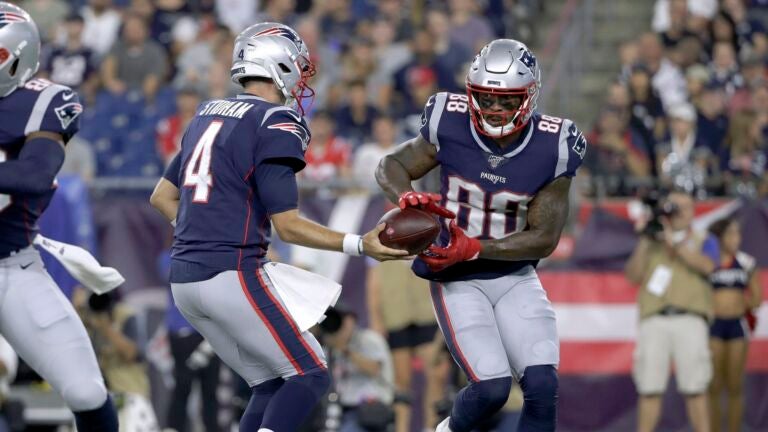