No one is calling Tua Tagovailoa a young Tom Brady, but a former Patriots executive believes there’s a noteworthy similarity between the two.

Scott Pioli, New England’s former director of player personnel, said Tagovailoa’s arm strength will be “just fine” and used Brady’s career arc to prove his point. The Dolphins quarterback was 23rd in the NFL last season in yards per pass attempt, but Pioli isn’t overly concerned by that trend.

“First five years of Tom Brady’s career, critics said over and over that he can’t throw the deep ball,” Pioli told the Miami Herald‘s Barry Jackson. “It’s all dink and dunk. Brady was deadly accurate.”

Pioli said Brady was told to make high-percentage throws because that’s what he could do best at that time. As Brady got older, Pioli said, he got stronger, and he envisions a potentially similar arc in that regard for Tagovailoa.

Former Dolphins executive Mike Tannenbaum isn’t as high on Tagovailoa and wouldn’t be shocked if Teddy Bridgewater sees time at some point this season. Miami has plenty of talent, with Tyreek Hill and Jaylen Waddle, among other playmakers, and Tannenbaum isn’t sure Tagovailoa is the best option to get them the ball downfield.

“Coach McDaniel will probably try to move the pocket, cut the field in half, have a lot of plays for Jaylen Waddle and Tyreek Hill that are catch and runs that play to Tua’s strength and try to maximize Tua’s ability that way,” Tannenbaum told Jackson. “They’re giving him everything a quarterback could want and then some.”

Many expect the Buffalo Bills to win the division and the Patriots and Dolphins to battle for second place and a potential Wild Card berth. The play of Tagovailoa or Bridgewater, and how they stack up against Mac Jones, could go a long way in determining which team has the edge. 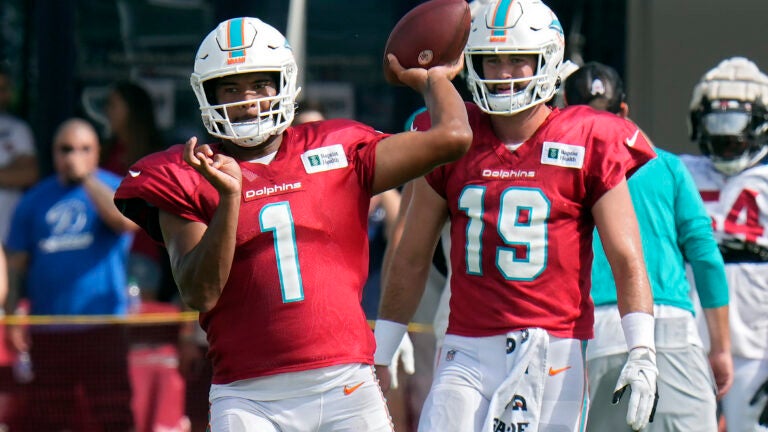