The Patriots enter the 2022 NFL season with not much high-level talent, or at least that’s what people around the league think.

In ESPN’s series ranking the top 10 players at each position (in which they surveyed more than 50 league executives, coaches, scouts, and players), only one Patriots player cracked the list at their respective position. That was Hunter Henry, who just barely made the cut as the 10th-best tight end in the league.

Not only was Henry the only player to crack the top 10 at their respective position, but no other Patriots player received honorable mention status or received a top 10 vote.

Of course, it could be argued that a few Patriots players were overlooked at their respective positions. Damien Harris was statistically one of the best running backs in the league in 2021. He ranked 10th in rushing yards (929) and was tied for second in rushing touchdowns (15). Matthew Judon earned a Pro Bowl nod after recording 12.5 sacks, tied for the seventh-most in the league. Devin McCourty had another good season in 2021, while the Patriots’ other safeties are constantly viewed as underrated (Adrian Phillips) or a player on the rise (Kyle Dugger).

But ESPN’s survey continued what might be a concerning trend for the Patriots entering the offseason. Several analysts, experts, and insiders around the league have ranked the Patriots, who are coming off a 10-7 season, relatively low in roster rankings. Pro Football Focus ranked the Patriots’ roster 18th in the league. The analytic website praised the Patriots’ safeties group, but is down on their cornerbacks following J.C. Jackson’s departure to the Chargers this offseason.

Pro Football Focus also ranked players at each position, but they went a little more in-depth with their rankings, including more players and defined more specific roles. Those rankings saw a few more Patriots crack the top 10, with David Andrews ranking ninth among centers, Michael Onwenu ranking seventh among guards, Henry ranking 10th among tight ends, Devin McCourty ranking 10th among coverage free safeties, and Jonathan Jones ranking third among slot corners. However, most of those positions are viewed as some of the least consequential position groups in the league as teams typically invest more salary at quarterback, tackle, receiver, edge rusher, and outside corner.

CBS Sports’ Cody Benjamin ranked the Patriots’ roster 24th in the league, citing similar concerns about them not having top-level talent.

“Bill Belichick’s oversight may well guarantee this roster always exceeds expectations, and no doubt QB Mac Jones has flashed the accuracy to stay competitive for the long haul. The defense is stingy more often than not, too, and Matt Judon is an underrated force off the edge,” Benjamin wrote.

“But the weapons aren’t necessarily scary, with Jakobi Meyers, DeVante Parker and Kendrick Bourne all arguably best suited for No. 2/3 roles, and the secondary is increasingly dependent on aging vets. No one would be surprised if Bill gets another playoff bid from this bunch, but no one’s really anticipating a deep run, either.”

Mike Reiss, who covers the Patriots for ESPN, viewed his company’s survey as both a negative and a positive for the Patriots.

“The lack of perceived blue-chip talent ties, in part, to [Patriots owner Robert] Kraft’s prior comments on draft struggles over a multiple-year stretch,” Reiss wrote in his Sunday notes column. “This could foreshadow the Patriots’ best-case scenario for 2022: While they might not have the star power of others, they are viewed as deep, and among the teams better equipped to handle the inevitable attrition from injuries.”

Of course, most of these rankings are based on performance from last season, which means surprising players or potential growth isn’t necessarily accounted for. Mac Jones could take the next step after playing like the best rookie quarterback last season to earn top 10 status. Dugger could also continue his ascension entering Year 3.

But as Reiss mentioned, the Patriots don’t really have much high-end young talent on their roster outside of Jones and Dugger. Rhamondre Stevenson had a strong rookie season, but he’ll be splitting time in the backfield with Damien Harris and others. Onwenu was viewed as one of the best guards during his rookie campaign in 2020. He played multiple positions in 2021 though and fell out of the starting lineup.

“There’s plenty of reason to believe Barmore could place much higher on this list at this time next year,” Pro Football Focus’ Ben Linsey wrote. “It often takes rookie defensive linemen a little bit of time to find their footing. Barmore’s rookie season wasn’t perfect, but he was already a more productive pass-rusher than any other rookie defensive tackle drafted in the past five years.”

No matter how you cut it, the Patriots’ roster isn’t highly regarded around the league entering the season, and they might need a few surprises in order to make it back to the playoffs. 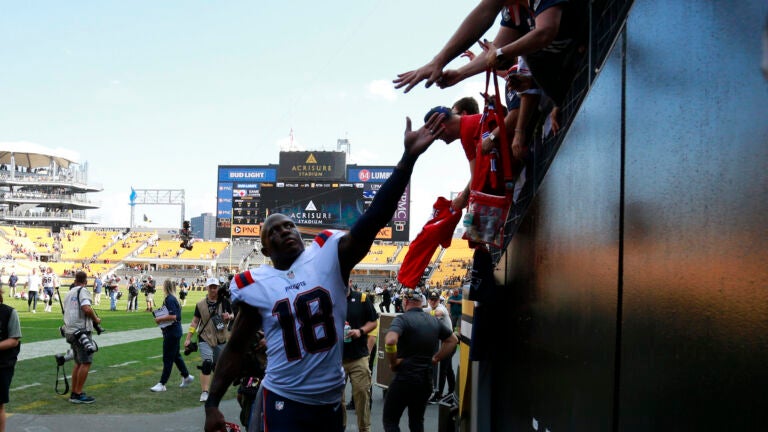