A common criticism of the Patriots in recent years has been their poor drafting ability. The 2021 draft might have changed that narrative.

Football Outsiders’ Aaron Schatz ranked the Patriots’ under-25-year-old players as the 15th-best in the league, which is substantially up from 30th ranking they had last year and the 31st ranking they had in 2020.

Obviously, Mac Jones was the headliner of the 2021 draft class for the Patriots. His 3,801 passing yards, 23 passing touchdowns, and 92.5 passer rating were all the best among the five rookie quarterbacks selected in the first round of that year’s draft. Jones also led the Patriots to a 10-7 record and the playoffs in the process, earning him a Pro Bowl nod.

Schatz pointed to Jones as one of the Patriots’ “blue-chip players” under 25, writing that while he’s got areas to improve in, he’s also proven to be a good quarterback already.

“The prize of that draft class was Jones, who was the fifth quarterback drafted last year but paced the rookie quarterbacks with a 6.1% passing DVOA (a stat that adjusts for efficiency based on the opponent),” Schatz wrote for ESPN. “Jones will need to improve his deep passing to enter the top echelon of NFL passers. But he already made the top 10 at his position with a 2.4% completion percentage over expectation in his rookie season.”

Schatz also pointed to defensive tackle Christian Barmore (2021 second-round pick) and guard Michael Onwenu (2020 sixth-round pick) as the Patriots’ other blue-chip players younger than 25. Running back Rhamondre Stevenson, who rushed for 606 yards and five touchdowns as a rookie in 2021, was also picked as a standout by Schatz.

“Barmore is explosive with three-down versatility,” Schatz wrote. “He finished tied for sixth among defensive tackles with 30 hurries in his rookie season. And while Stevenson played second fiddle to capable lead back Harris, the 229-pound Stevenson bested his teammate with 3.1 versus 2.5 yards after contact per attempt, a rate that ranked him eighth among backs with 100 or more carries. In addition, sixth-round sophomore lineman Onwenu improved on an unexpectedly excellent rookie season, cutting his 1.5% blown block rate to 1%.”

Coming off strong rookie seasons, Barmore and Stevenson each appear to be off to a good start to have even better sophomore seasons. Barmore’s arguably been one of the top players at Patriots training camp so far, winning his 1-on-1 drills against the team’s offensive linemen on a near-consistent basis.

Meanwhile, Stevenson said he entered camp seven pounds lighter than last season, feeling faster than he did as a rookie. Stevenson said he also worked on his skills to become more of a threat in the passing game, either as a receiver or blocker. He’s been featured in several roles so far in camp, working as a running back, pass-catching back, and returner.

Like many, Schatz questioned the Patriots’ top selections of guard Cole Strange and wide receiver Tyquan Thornton in this year’s draft. But he also wrote the Patriots “can afford to miss” on high-round gambles if they hit with later round picks or undrafted free agents, which they’ve done with Onwenu, J.C. Jackson, and Jakobi Meyers in recent years.

“Strange was a surprising first-round pick out of an FCS school in Chattanooga,” Schatz wrote. “And while Thornton just missed a combine record with a 4.28-second 40 time, his skinny frame at 6-foot-3 and 182 pounds might limit his NFL role compared to subsequent receiver picks George Pickens, Alec Pierce and Skyy Moore.”

The super early returns on the Patriots’ top two selections haven’t been too spectacular. Strange has been part of an offensive line that’s struggled for much of camp. Thornton’s had some standout moments in 1-on-1 drills in pads against the Patriots’ defensive backs, making a pair of deep impressive sideline catches in those drills. Thornton worked with the second unit at Friday’s intrasquad scrimmage, which could be a sign that he’s got a ways to go before seeing the field a lot this season.

Cornerbacks Marcus Jones and Jack Jones – who were the Patriots’ third- and fourth-round picks, respectively – have been active in camp. Marcus Jones has mostly seen snaps as a slot corner, working with the first unit at Friday’s practice as he’s been returning kicks and punts, too. Jack Jones has worked more on the outside, but he’s played a bit at nickel, too. He was on the second unit for Friday’s scrimmage.

Safety Joshuah Bledsoe, who was selected in the sixth round of the 2021 draft, has also been an early standout in camp, potentially adding another valuable piece to the Patriots’ young core. 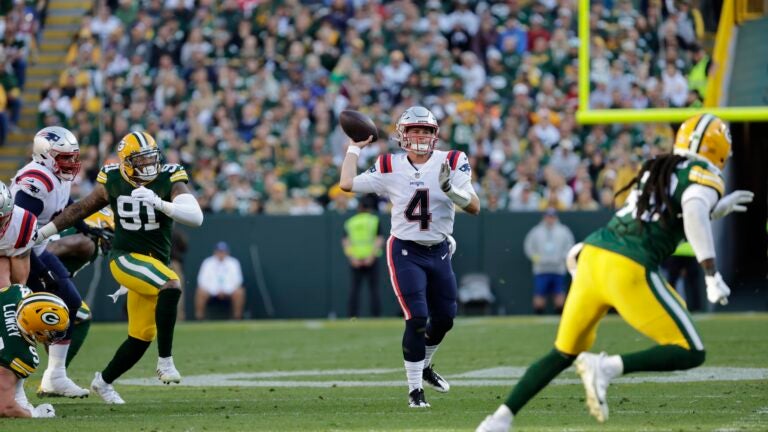