One play that stuck out from Friday’s preseason finale loss to Las Vegas, perhaps even more than both times he was sacked, was when Mac Jones felt so much pressure he ran backwards out of the pocket to buy enough time to throw the ball away.

“I’m not a big guy to take one small clip of something and over magnify it,” Judge said. “I say all the time, the NFL is a league of extremes. It’s one week, what’s the storyline. We’ve got a week in between the games, in this instance we have two weeks in between the games. So it’s what’s the storyline that’s going to run? You can’t chase that. You can’t chase the narratives. You’ve got to show up every day.”

The offense had a rough showing during the preseason. The offensive line has given up nine sacks over the past two games. The quarterbacks have thrown more interceptions than touchdowns.

But there’s a big difference between preseason and regular-season games, Judge said.

“There may be an adjustment here or there, just based on how we match up with something,” Judge said.” But preseason games are really much more about getting out there and letting players play. It’s not really scheme heavy, it’s not about game-planning against the opponent. We had competitive practices last week against the Raiders. That’s a great opportunity to go out there and try new things, to work some things you’ve got in the playbook and see how they develop.”

Out of seven preseason drives with Jones under center, the Patriots scored twice. And most of that action was against backups.

Judge was asked before practice on Monday if he thought Jones was playing calm in the pocket and seeing things through properly.

“I’ve seen great examples of this guy hanging in and making really, really tough throws,” Judge said. “We’ve had some examples against the Raiders last week … watching this guy stand in there and make good, clean decisions and deliver a good accurate ball. I’m absolutely very pleased with how he’s worked.”

As the Patriots continue to install their new offense, Judge noted that some of the concepts including the outside zone blocking scheme date back a long time to past New England teams.

“As you look through the outside zone stuff, you can pull up the install tapes from 2012, 2013, you can go all the way back,” Judge said. “This organization has always done whatever it takes to be successful with the players we have. It’s coach’s vision and it’s our job to coach it and teach it with as much energy and enthusiasm as we can.” 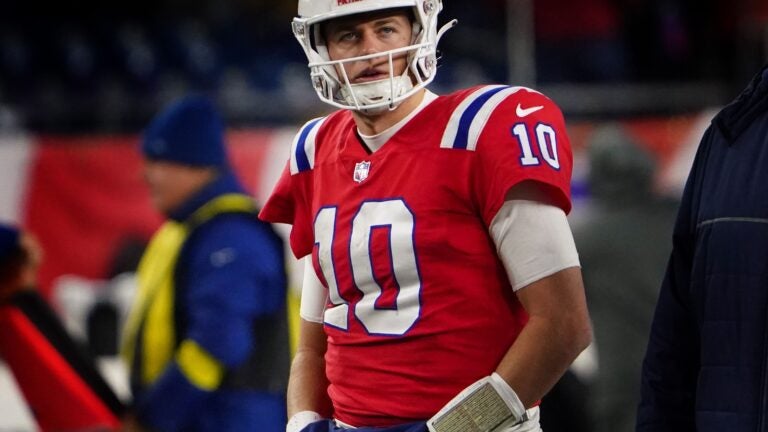