With Mac Jones likely to miss multiple games due to a severe high ankle sprain, the Patriots are turning to a familiar face to lead the offense.

Backup quarterback Brian Hoyer is set to start against the Packers on Sunday. The 36-year old last started for New England in Week 4 of 2020, after then-starter Cam Newton tested positive for COVID-19 prior to that week’s game against the Chiefs.

Hoyer struggled in the 26-10 loss, going 15 of 24 for 130 yards and no touchdowns while committing two costly turnovers.

Here are four things to know about Hoyer.

Hoyer starred at Michigan State between 2005-2008, leading the Spartans to a 16-11 record in his 27 starts with the program. He is sixth in program history with 6,159 passing yards, and his 35 touchdown passes are good for ninth-most of any Spartan.

As a fifth-year senior in 2008, Hoyer was named as a team captain. He was an honorable mention All Big Ten selection that year as well, throwing for 2,404 yards and nine touchdowns.

During his time at Michigan State, Hoyer was teammates with former Super Bowl winning Eagles quarterback and current Colts backup Nick Foles, who played for the team as a freshman in 2007 before transferring to Arizona. He also shared the quarterback room with current Vikings quarterback Kirk Cousins, who redshirted in 2007 and served as his backup during the 2008 season.

He has started for seven different NFL teams.

After going undrafted in 2009, Hoyer signed with the New England Patriots. He served as a backup for three seasons in New England, seeing limited action and not starting any games for the team before being released prior to the 2012 season.

Since then, Hoyer has gone on to start games for the Cardinals, Browns, Texans, Bears, 49ers, Colts, and Patriots (in 2020).

The seven different teams that Hoyer has started for marks a tie for the second most of any quarterback in the Super Bowl Era, trailing only Ryan Fitzpatrick’s nine.

He’s actually played for eight teams – Hoyer spent a few weeks during the 2012 season with the Pittsburgh Steelers, but never started a game for them.

Overall, Hoyer has made 39 career starts, with a record of 16-23 in those games, according to Pro Football Reference. The most starts he has made for any one team is 16, with the Cleveland Browns.

This is his third stint with New England.

Hoyer was released by the Patriots three years after originally being signed as an undrafted free agent, but has since returned multiple times since his first stint from 2009-11.

After spending time with multiple teams since his first release from the Patriots, Hoyer began the 2017 season as the San Francisco 49ers’ starting quarterback, but was benched in favor of C.J. Beathard during Week 6. Shortly after, the Niners made a move to acquire Jimmy Garoppolo from the Patriots, releasing Hoyer following the deal.

Just days later, the Patriots brought Hoyer back on a three-year deal to again serve as Tom Brady’s backup. Again, Hoyer did not start any games, but was active for the Patriots’ victory in Super Bowl LIII.

He was released prior to the 2019 season, and signed with the Indianapolis Colts.

Hoyer was let go by the Colts following the 2019 campaign, and subsequently picked back up by the Patriots. He made his first (and, to date, only) start with New England in Week 4 of the 2020 season – a 26-10 loss to the Kansas City Chiefs.

His real name is Axel.

This week, Matthew Slater made headlines when he revealed a little-known fact about Hoyer – his real name is actually Axel.

The quarterback was born Axel Edward Brian Hoyer. He shares the first name with his father, who recently spoke about Brian on the “Rocking the RV Life” podcast.

Slater used Hoyer’s real name on Monday, when he expressed his confidence in the veteran’s abilities.

“”I’ve known Axel for 14 years now, been a teammate of his on and off over that period of time. We have a lot of confidence in him,” Slater said. 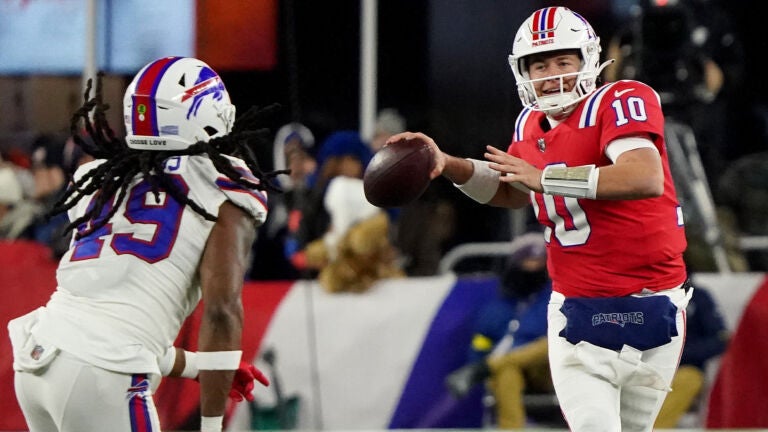