FOXBOROUGH, Mass. (AP) — In the postgame locker room euphoria of the Patriots’ 10-3 win over the Jets on Sunday, references to Marcus Jones’ 84-yard punt return touchdown gallop echoed throughout.

But on a day in which New England’s special teams shined, and the defense’s dominance underlined its steady improvement throughout the season, it also highlighted just how far the offense is behind as the Patriots prepare to make their playoff push.

Since quarterback Mac Jones returned from a three-game absence from an ankle sprain, he has led the offense on just two touchdown drives, compared to 10 field goals.

He was efficient against the Jets on Sunday, completing 23 of 27 passes for 246 yards and a 104.6 passer rating. But the Patriots came up empty on both of their red zone opportunities.

The Patriots have converted on just 12 of 28 opportunities through 10 games.

As good as the defense is playing this season, it will need the offense to do a better job of finishing drives down the stretch with matchups against some of the league’s highest-scoring teams in the Bills (28.1 points per game), Bengals (26.5 ppg) and Dolphins (25.2 ppg) still on deck.

That’s not lost on Mac Jones, who acknowledged that ending with TDs will be the biggest point of emphasis going forward.

“I think it’s super disappointing,” he said. “We put too much work in to get that result. I think it starts with us, the execution part, and then obviously trying to figure something out here.”

One of the most understated parts of the Patriots’ success on defense has been how well Jonathan Jones has thrived in his new role as outside cornerback.

Jones spent most of the first six seasons in New England in the slot, but switched during training camp after J.C. Jackson’s offseason departure in free agency.

The move has allowed the Patriots to get by with smaller players such as 5-foot-9 Myles Bryant in the slot and force teams to pick their poison against Jones or Jalen Mills on the outside.

A game-time wind chill in the mid-20s could have certainly played a role. But something was amiss in the kicking game on Sunday.

Nick Folk had misses from 44 and 43 yards, his first time misfiring on multiple field goals in a game this season. The likely culprit is that he was working with a new holder, with Michael Palardy assuming the holding and punting duties with Jake Bailey on injured reserve with a back issue.

The good news is Palardy punted well, averaging 45.3 yards on seven kicks. But with Bailey sidelined for at least the next three games, Palardy’s holds must get better in a hurry.

Matt Judon. Another game, and another big performance by the linebacker who is making his second year in New England even better than his first. He had 1 1/2 sacks Sunday, pushing his season total to a career-high 13, topping his 12 1/2 from 2021.

Yodny Cajuste. The Patriots’ utility man on the offensive line, he made a surprise start at right tackle, in place of a healthy Trent Brown. Cajuste he had issues throughout the game, allowing Quinnen Williams and John Franklin-Myers to get through for a sack on Mac Jones on the first play of the game. He then allowed Williams to get to Jones again in the second quarter.

The O-line will have to figure things out with several players dealing with injuries. Center David Andrews played in his first game since returning from a concussion but left late in the first quarter with a thigh injury. Isaiah Wynn, who started in Brown’s normal left tackle spot, also left with a foot injury.

16.9 — The points per game allowed this season by the Patriots defense this season through 10 games. It is the second fewest in the NFL behind only Dallas at 16.2.

The Patriots face their shortest turnaround of the season as they prepare to visit Minnesota on Thanksgiving. It’s part of a stretch that will see them play three games over 12 days. 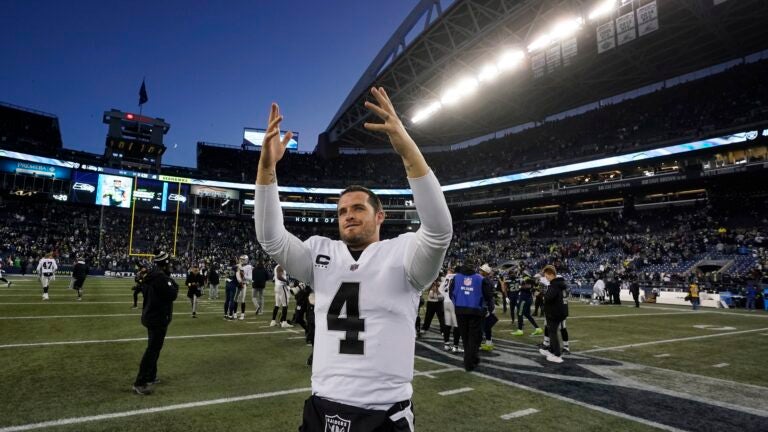