Whatever the result in Tuesday’s final group stage game, Revolution fans will get to witness some history, and they’ll to do so while enjoying their breakfast.

At 9 a.m., the earliest local time kickoff in team history, New England will face Toronto FC to decide the winner of the Group C in the MLS is Back Tournament. Through two games, both teams currently top the group with one win and one tie. Toronto currently holds the tiebreaker lead on goal difference.

Should the Revolution win, it would guarantee advancement to the tournament’s knockout round. A tie or a loss would leave New England awaiting the result of D.C. United’s game against the Montreal Impact later in the day (10:30 p.m.).

The early kickoff time has been a feature of the tournament, with several games scheduled in the morning to help avoid the midday heat that’s customary to Florida’s summer climate. With the entire tournament held at Disney World inside the league’s “bubble” to help limit exposure to COVID-19, league officials planned kickoff times at 9 a.m., 8 p.m., and 10:30 p.m.

Both of New England’s first two games of the tournament were at 8 p.m. Now, Revolution players will get their first taste of a morning game.

Head coach Bruce Arena is aware that the 9 a.m. time is arguably the most challenging.

“Well, you have to prepare knowing that the conditions will be a lot more difficult than they are in the evening,” Arena said in a team press conference. “It’s very warm here in the morning. The players are well aware of that, they’ve been training in these conditions, so they know what to expect and hopefully we get through it OK.”

The current weather forecast projects temperatures in the mid-80s, humidity in the mid-70s, and a slight chance of thunderstorms.

After a 1-0 win against Montreal in New England’s tournament opener, the Revolution stumbled to a 1-1 draw against D.C on Friday. Now, the challenge will be a quicker turnaround time as players prepare for the unforgiving Florida humidity.

“Personally, for me it will be a new experience,”forward Adam Buksa said. “I’ve never played a game so early. I think the difference between the games regarding break, it will not affect us at all. But that part of the day, 9 a.m., it’s a little bit different. I’m curious how it’s going to be like, but I think we will be ready for it. Normally, we train mostly in the morning here in Orlando, so we’re used to it. But as I said, I’ve never played a game that early, so it will be a new experience for me.”

The other concern for New England remains the status of playmaking midfielder Carles Gil, who missed much of the preseason and both of the Revolution’s first two regular season games with a foot injury before the league paused due to the coronavirus pandemic.

Gil, 27, exited Friday’s game in the 62nd minute, with Arena explaining afterward that the Spaniard was “dealing with the same injury he had in preseason.”

Should Gil prove unable to play, his replacement might be 25-year-old midfielder Diego Fagundez. For Fagundez, getting an early start is already part of his schedule.

“I think it’s going to be tough for some people,” Fagundez said. “Individually, for myself, I’m fine. I go fishing in the morning all the time, so it’s one of those things that I’m used to getting up. I have to go to training early, so I have to get up at 6:30, 7 o’clock, and be at training at 9, so it’s going to be a normal routine for me. But at the end of the day, whoever is mentally prepared for this is going to be the winner. And I think what we’re trying to do right now. Everybody’s making sure that we’re ready for this.” 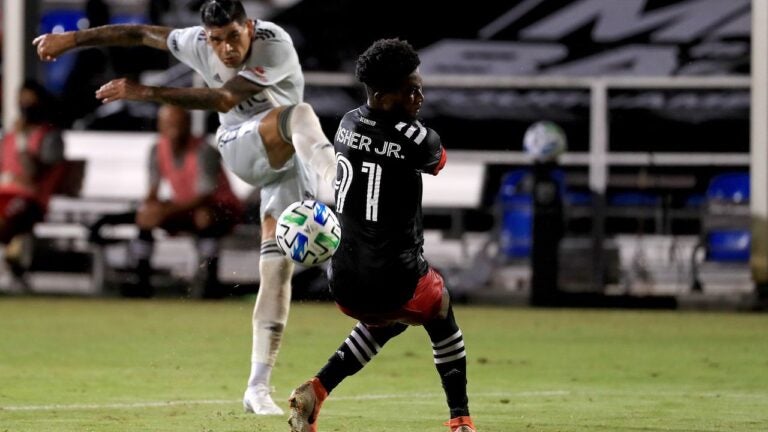 3 takeaways from the Revolution’s tie with D.C. United