As familiar as the Revolution have become in 2021 with overcoming an early deficit, Bruce Arena’s team is even more adept at seeking out a one-goal margin of victory.

New England achieved both in a 2-1 win over New York City on Saturday night at Gillette Stadium. After Santiago Rodriguez’s 11th minute opener for New York, a 21st minute goal from Revolution winger Emmanuel Boateng got the home team back on level terms.

And following some key substitutions — including the entrances of Carles Gil, Tajon Buchanan, and Adam Buksa — New England found the go-ahead goal after New York midfielder Alfredo Morales was sent off in the 53rd minute following a second yellow card.

Gil, making his second straight appearance off the bench after returning from an injury, provided his league-leading 16th assist for Buchanan’s 65th minute goal (a well-struck volley into the far corner of the net).

The win extends the Revolution’s 2021 record to a league-leading 17-4-4, including six wins in the team’s last seven games. New England is also an impressive 4-3-1 on the year when surrendering an opening goal, and have notched 14 one-goal wins.

Emmanuel Boateng continues to make the most of his chances.

In just three starts for New England in 2021, the 27-year-old Boateng has made the most of his opportunities, tallying two goals and an assist (having also compiled two assists in his substitution appearances).

His equalizer on Saturday was the Revolution’s first shot of the game, and — that it came in the 20th minute — was indicative of how New England started slowly.

For the second game in a row, Arena selected a Starting XI that did not include any of the team’s three “Designated Players.” Buchanan was also on the bench to begin with, given that he was among the trio of players returning from recent international duty.

But even without several regular starters, the Revolution eventually worked their way into the proceedings following Rodriguez’s opener, which gave the visitors a 1-0 lead.

Steady spells of possession settled things down for New England, and a smart run from forward Teal Bunbury was picked out on a long pass from center back Andrew Farrell to set up the Revolution tying goal.

Bunbury, receiving the ball on the right wing, fired a low cross in for fellow forward Edward Kizza.

And Boateng, asked to play a more central role instead of his more customary position farther out wide, provided a clean finish after Kizza rolled the ball into his direction towards the top of the penalty area.

Not surprisingly, the Revolution’s star subs made the difference.

After battling New York to a standstill in the first half, Arena slowly began to turn up the pressure through the introduction of multiple impactful substitutions.

Gil replaced a tired Boateng to begin the second half, with Buchanan and Buksa following 15 minutes later. In the intervening time, the game changed dramatically when Morales was given a second yellow card and sent off for a late tackle on Revolution midfielder Tommy McNamara.

Up a player, and with fresh substitutes introduced, New England unsurprisingly found a goal within minutes.

Another well-placed pass from Farrell found the run of Gil into the right corner. The Spaniard then faked New York center back James Sands, creating space before he casually slid the ball into the path of Buchanan.

Fresh off of scoring his second career international goal for Canada in a World Cup qualifying win at midweek, Buchanan calmly slotted the ball into the top corner to give the Revolution a lead they would not relinquish.

While the final period of the game following the go-ahead goal was far from comfortable — including the squandering of several golden opportunities to extend the lead — Arena was pleased with how his team responded.

“We certainly had some chances to get the third goal and make things a little easier on ourselves,” Arena admitted in a postgame television interview, “but for the most part we played a solid game.”

In the midst of the “toughest” regular season month.

The win over New York means that New England takes the season series against an Eastern Conference rival, avenging one of the team’s rare 2021 losses (sustained at Yankee Stadium on Aug. 28).

With nine games remaining, the Revolution are in a strong position to claim the East’s top playoff seed, ensuring that the road to MLS Cup runs through Gillette Stadium (where New England is 10-1-1 this season).

“Until some mathematician tells me we’ve qualified, we’re not there yet,” he joked.

Still, Arena thinks his team is in the midst of its most difficult month.

“The month of September,” Arena noted in the television interview, “is probably the toughest we’ll play all year.”

Having already played New York, New England now heads into a sequence of four games in 11 days, including games against Orlando City and Montreal (both currently sit in playoff positions), as well as defending MLS Cup champions Columbus.

But with the exception of forward Gustavo Bou, who is still out injured, the Revolution appear to be returning to something close to full strength. Arena’s team survived a period in which it was missing not only the players who participated in World Cup qualifiers but also Gil, the team’s MVP candidate.

Now, the Eastern Conference’s top team seems poised for a sprint to the end of the regular season. 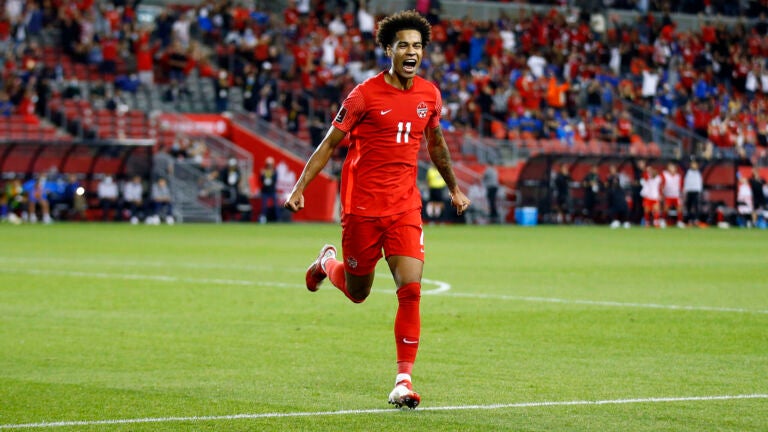