Adam Buksa pounced on a mistake from the Columbus Crew defense to score the tying goal in what finished as a 1-1 draw for the Revolution on Saturday.

New England remains unbeaten in the month of September (2-1-0), but failed to walk away with a win despite outshooting Columbus 33-6. Crew forward Gyasi Zardes briefly put the visitors into the lead with a powerful header in the 58th minute.

Despite being unable to find a winner at home, the Revolution remain 15 points clear of the next closest team in the Eastern Conference with eight games remaining in the regular season.

Here are a few takeaways from the game:

A glimpse at the full strength lineup, but is it the best XI?

For the first time since May, Gustavo Bou, Tajon Buchanan, Adam Buksa, Carles Gil, and Matt Turner all started in the same New England lineup together.

Though it could be argued that the quintet are the five most talented Revolution players, New England remains winless in games where the entire group starts (two draws and a loss).

Granted, Revolution head coach Bruce Arena hasn’t had all five available for the same game since July due to international call-ups and injuries.

But given that the Revolution have managed such a strong season with so many different lineup combinations, it does beg the question: Who exactly starts in Arena’s current best XI? It’s a topic to watch throughout the remainder of the regular season.

The game ended in a draw despite the Revolution’s dominance.

Never one to hold back in his postgame comments, Arena had a simple summary of New England’s advantage in possession (62% vs. 38% for Columbus) and shots on target (7-2).

“That should have been a 3-0 game,” he told reporters afterward.

Having struggled to win home games in 2020 (going just 2-3-5 in the shortened regular season), one of the Revolution’s strengths in 2021 has been making Gillette Stadium a difficult place for opponents.

Coming into the matchup, New England was 10-1-1 at home, and appeared to be creating more than enough opportunities for its stars. Gil, making his first start since July due to an injury, led the game with 10 key passes (more than every Columbus player combined).

Yet the winning goal proved elusive. And while Turner was able to get a hand to Zardes’s header, even the United States’ starter couldn’t quite keep it out.

The run continues through a busy month.

Arena labeled September as “probably the toughest we’ll play all year” partly because of the busy stretch of games New England is now immersed in.

Including Saturday, the Revolution have four games in 12 days prior to another international break.

Difficult as it is to play so many games in such a short stretch, it’s become a habit for a team that’s coped fairly successfully with some of the challenges posed by the league’s scheduling decisions.

While Arena noted that every midweek game involves different factors, he acknowledged that the return of several players from injury (including Bou and Gil) has eased the challenge of a crowded schedule.

“Are we used to it? Yeah, a little bit,” said Arena, “but I think the biggest advantage we have at this point is I think we’re getting some players back, so it makes rotations a little bit easier as well.”

New England continues in Chicago on Wednesday at 8 p.m. 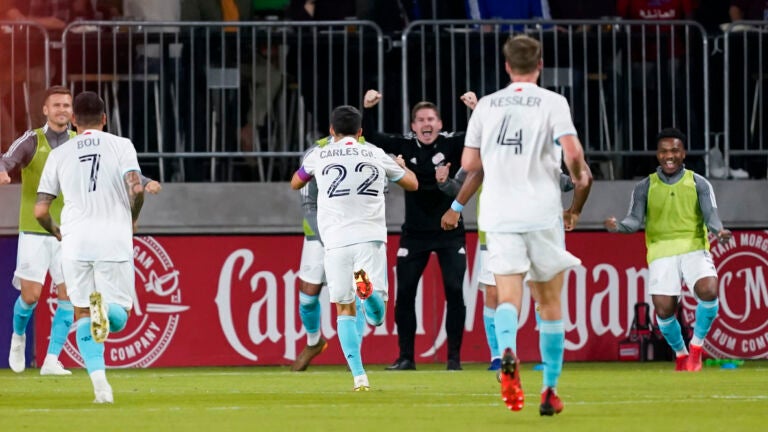