Despite being outplayed for large stretches of Sunday’s game against Orlando City, the Revolution managed to stage a late rally to secure a 2-2 draw.

Two goals from substitute Adam Buksa — who, like several of New England’s starters, began the night on the bench after playing in a midweek win against D.C. United — was enough to secure a point in New England’s final road game of the 2021 season.

The team officially clinched the Supporters’ Shield trophy on Saturday, and is now one win away from setting an MLS record for points in the regular season.

Here are a few takeaways from a rainy night in Orlando:

A heavily rotated lineup was bogged down in the first half.

Having played what appears to be his first choice Starting XI in Wednesday’s 3-2 win, Revolution coach Bruce Arena again showed total confidence in a heavy lineup rotation for Sunday’s matchup.

Nine changes were made, leaving only center-back Andrew Farell and goalkeeper Matt Turner.

Playing against an almost full strength Orlando team, it was evident almost immediately that New England’s makeshift lineup would struggle to create chances, or even hold onto the ball.

Orlando was able to attain a near monopoly in possession for long stretches of the first half. The game was also impacted by heavy rains, which limited each team’s ability to play more intricately.

After a period of sustained pressure, Portuguese winger Nani found the breakthrough for the hosts, heading a cross past Turner for a deserved lead in the 39th minute.

Revolution first-team players turned it around.

In the second half, Arena began to substitute in his regular starters. This initially had little effect on the game, especially when Nani won a penalty in the 50th minute which forward Daryl Dike buried to make it 2-0 Orlando.

But especially after the 64th minute, when a triple substitution from New England introduced Gustavo Bou, DeJuan Jones, and Tajon Buchanan (joining Carles Gil and Adam Buksa as the Revolution’s five second-half changes), the game began to tilt downhill towards the Orlando goal.

From the 64th minute until the end of the game, New England outshot Orlando 8-2. Still, it wasn’t until the hosts settled into a lower defensive block (having made substitutions of their own) that the Revolution got on the scoresheet.

In the 81st minute, Bou found space just outside the box before clipping a well-weighted cross into the box. Buksa, timing his run in behind Orlando defender Rodrigo Schlegel to perfection, pounced and tucked the ball into the net to make it 2-1.

Having reestablished a foothold in the game, the Revolution pushed for an equalizer.

Jones in particular had a strong performance, surging forward down the left wing. The 24-year-old was confident in possession, spearheading several Revolution attacks. It was therefore no surprise that his stoppage time cross found the head of Buksa.

The Polish forward nodded Jones’s 93rd-minute cross to the corner of the goal to level the score at 2-2. The 25-year-old Buksa who now has 16 goals on the season, and nearly found a game-winner on another header, but it went wide.

The comeback could have long-term implications.

When the final whistle sounded, it may have been Orlando who were the more relieved of the two teams. Despite being outplayed for large stretches (particularly in the first half), New England had completely stolen the initiative by game’s end.

And given context of the game — with such a rotated starting lineup — the Revolution can take some pride in the result.

Looking ahead to a potential playoff matchup — as the Revolution are the east’s No. 1 seed — Orlando, currently sitting third in the conference, will likely have to grapple more with the lineup New England had on the field at the end of the night than the beginning. And based on that admittedly smaller sample size, Arena can be pleased with what he saw.

Down 2-0 with less than 10 minutes to go (not including stoppage time), New England proved yet again that they can score late goals when trailing in game. And given Buksa’s current form in scoring from crosses, the Revolution have also shown that they can create more goals than simply the ones Gil unlocks through his passing.

The busy schedule continues for New England on Wednesday at 7 p.m. in a home matchup against Colorado. A win would push the Revolution to 73 points on the season, one more than the current MLS record (72, set by LAFC in 2019). 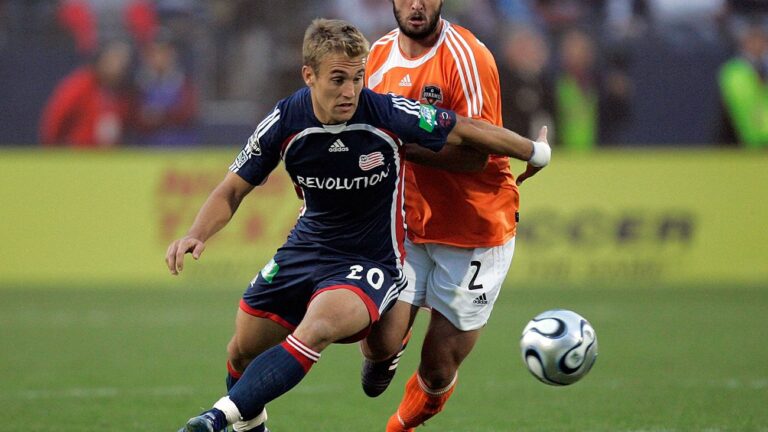 Taylor Twellman on the Revolution's run and soccer's rise